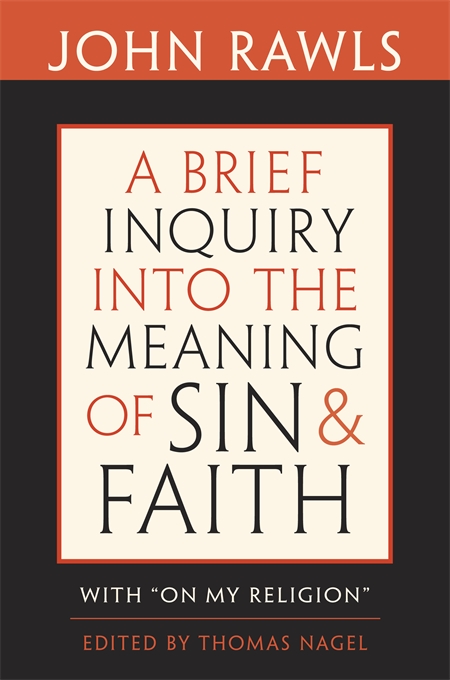 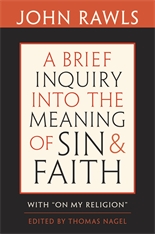 A Brief Inquiry into the Meaning of Sin and Faith

With “On My Religion”

John Rawls never published anything about his own religious beliefs, but after his death two texts were discovered which shed extraordinary light on the subject. A Brief Inquiry into the Meaning of Sin and Faith is Rawls’s undergraduate senior thesis, submitted in December 1942, just before he entered the army. At that time Rawls was deeply religious; the thesis is a significant work of theological ethics, of interest both in itself and because of its relation to his mature writings. “On My Religion,” a short statement drafted in 1997, describes the history of his religious beliefs and attitudes toward religion, including his abandonment of orthodoxy during World War II.

The present volume includes these two texts, an Introduction by Joshua Cohen and Thomas Nagel which discusses their relation to Rawls’s published work, and an essay by Robert Merrihew Adams which places the thesis in its theological context.

The texts display the profound engagement with religion that forms the background of Rawls’s later views on the importance of separating religion and politics. Moreover, the moral and social convictions that the thesis expresses in religious form are related in illuminating ways to the central ideas of Rawls’s later writings. His notions of sin, faith, and community are simultaneously moral and theological, and prefigure the moral outlook found in A Theory of Justice.