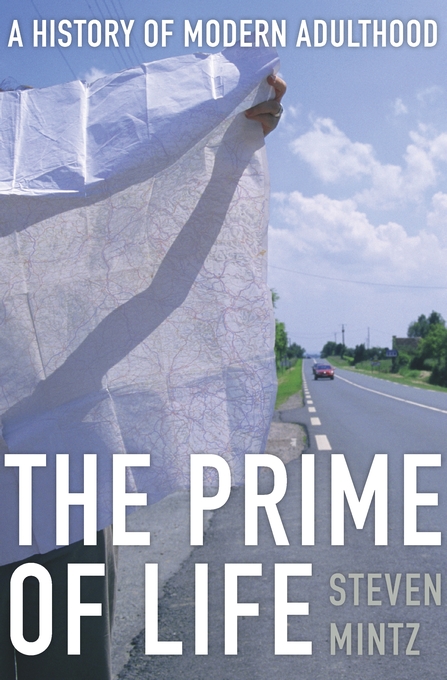 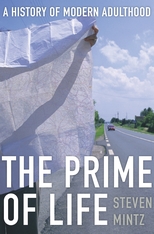 The Prime of Life

A History of Modern Adulthood

“We live in an age of generational turmoil. Baby-boom parents are accused of clinging on to jobs and houses which they should be freeing up for their children. Twentysomethings who can’t afford to leave home and can’t get jobs are attacked as aimless and immature. Both sides of the generational divide should take comfort from this timely, thoughtful work by Steven Mintz… Mintz argues for a new understanding of adulthood… It is a great book, and a triumph of historical writing; it shows that the past really can explain the present.”—Jane Ridley, The Spectator

“[Mintz] offers some comforting news. Going back centuries in this country, ‘adults’ never particularly had their acts together… [He shows] that the 1950s model of family life, with its emphasis on early marriage and childbearing as markers of adulthood, is anything but representative of traditional values… His message—that there are many ways to wear the mantle of responsible adulthood and that the 1950s model is a mere blip on history’s radar—is deeply necessary and long overdue.”—Meghan Daum, The New York Times Book Review

“Mintz uses history to illustrate both the similarities and differences between adulthood in 2015 and adulthood in other times, so that readers can put their lives into perspective… Mintz is a good storyteller and his examples, particularly from centuries past are engaging. Ultimately, Mintz provides a very readable, and very interesting, history of an all too often overlooked subject.”—Catherine Ramsdell, PopMatters

“Coming of age, argues historian Steven Mintz, is not what it used to be. Characterizing adulthood as a ‘historical black hole,’ Mintz sets out to trace the concept’s trajectory from the nineteenth century to its 1950s apex, and its disintegration in our individualistic times. He looks at shifts in intimacy, marriage, parenthood and work, noting that some 80% of today’s U.S. citizens in their late twenties have yet to tick off all the traditional indicators of adulthood, such as leaving home. Yet we need to dig deeper to redefine adulthood, he avers—not least, by reinstating qualities such as judgement to the definition.”—Barbara Kiser, Nature

“Describing the cultural, economic, and social changes from the Colonial era to today’s world with a wealth of information and attention to class, gender, and ethnicity, Mintz argues that neither religious nor secular middle-class values are adequate responses to the new generation’s problems.”—N. Zmora, Choice

“A thoughtful and strangely encouraging tour of an often difficult life stage.”—Kirkus Reviews

“Historian Mintz approaches a big subject—American adulthood—in a big way; by drawing on 400 years of social and economic history, philosophy, psychology, law, religion, literature, art, and even cinema and television… He presents a thoughtful and thorough guide through the life stages for all readers wishing to embark on these big voyages.”—Janet Ingraham Dwyer, Library Journal

“In the 1950s, most men had met all of society’s markers for adulthood by their mid-20s—and most women would never fully meet them, whatever their age. In this engagingly written and thought-provoking book, Mintz explores the fascinating history of American definitions of adulthood and shows how new economic, cultural, and gender relationships have expanded and complicated those definitions in recent years.”—Stephanie Coontz, author of A Strange Stirring: The Feminine Mystique and American Women at the Dawn of the 1960s

“The Prime of Life is a compelling story of just how much the meaning and process of attaining adulthood has changed throughout the history of the United States. Mintz does a masterful job of narration and interpretation, reminding readers why he is the preeminent historian of the life course.”—Frank F. Furstenberg, author of Destinies of the Disadvantaged: The Politics of Teenage Childbearing