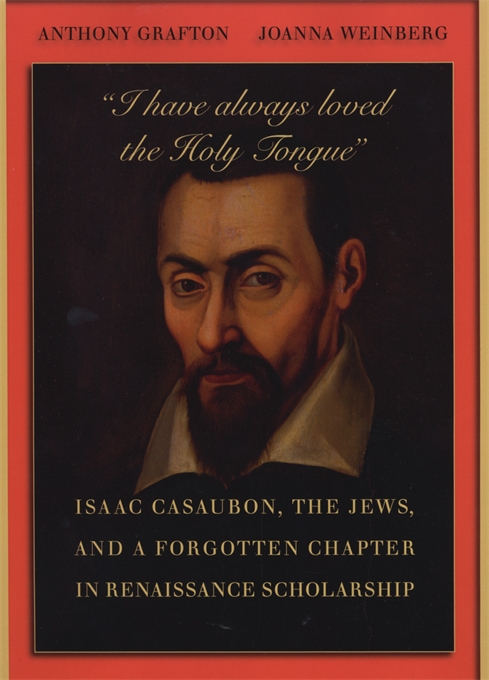 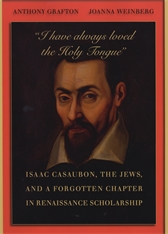 “I have always loved the Holy Tongue”

Isaac Casaubon, the Jews, and a Forgotten Chapter in Renaissance Scholarship

“So thorough a reassessment of Casaubon that it also serves as an introduction to him and his world… [It] is full of wonderful details that help carry the reader along… ‘I Have Always Loved the Holy Tongue’ reveals Casaubon’s character, his relationship to his time and to his work on the past, his search for truth and his search for God, with more nuance, depth and coherence than his biography does, in half as many pages. It also restores his personal agency by revealing his sense of purpose and the rewards of his lifelong quest.”—Sam Stark, The Nation

“Valuable studies of Renaissance Hebraism have proliferated… But in their splendid new book, Anthony Grafton and Joanna Weinberg direct our attention to a figure whose name is virtually absent from all of the earlier accounts: Isaac Casaubon, the great Huguenot scholar, who lived from 1559 to 1614…Grafton and Weinberg sparkle as they recreate for us a world in which great scholars formed passionate lifelong attachments to colleagues they would never meet…Grafton and Weinberg amply demonstrate that Casaubon’s Hebrew studies should be given pride of place in his intellectual biography—and that this fact reveals something important not only about Casaubon himself, but also about the phenomenon of Christian Hebraism more broadly… [An] extraordinary book…These two superb scholars have pooled their considerable talents to conjure for us a world of such immense and varied learning that it is bound, in Montesquieu’s words, to ‘astonish our small souls.’”—Eric Nelson, The New Republic

“A book that floored me in 2011 was “I Have Always Loved the Holy Tongue”, by Anthony Grafton and Joanna Weinberg. The subtitle gets at the subject field—Isaac Casaubon, the Jews, and a Forgotten Chapter in Renaissance Scholarship—but does less to suggest the book’s drama and style. Princeton professor Grafton is as gifted a writer as he is a historian—something you know if you’ve read his illuminating book about footnotes—and Weinberg is a preeminent Hebraist at Oxford. Each contributed his or her expertise, and together they’ve done nothing less than reconstruct a lost chamber in one of the major Renaissance minds. Isaac Casaubon is only quasi-remembered today for having bequeathed his name to the dry old scholar character in George Eliot’s Middlemarch, but Casaubon the man was deeply passionate in both learning and life (he vigorously wooed a printer’s daughter and is said to have fathered 18 children by her). Born of French-Swiss Huguenot refugee stock (like Rousseau), he eventually settled in England, and did as much as anyone in the 16th and early 17th centuries to establish the model of intellectual rigor that we continue to associate with ‘serious scholarship.’ He was a classicist primarily, and as such both a linguist and a historian, who made earth-clearing strides in those disciplines, and specifically in bringing them together. What’s less known, and indeed was virtually unknown before now, is the depth of Casaubon’s interest in Hebrew texts and historical Jewish culture. To excavate this by-no-means-insignificant aspect of his thought, Grafton and Weinberg summon a dauntlessness of research that would earn a nod of respect from the master himself. Many of their extensive primary sources are tiny, deciphered marginal notes from Casaubon’s books and copybooks (which they tracked down in libraries all over Europe), as well as obscure Latin correspondence with his academic friends and foes. They find a thinker fascinated with Jewish language and history at a time of near-ubiquitous anti-Semitism, when Jews themselves were forbidden from living in England, and when any Christian writing on ancient Judaism had to follow a distorted, villainizing narrative, no matter what the facts said. In this book, we find Casaubon struggling to subvert those obstacles, but also hobbled by them, in that his own ideas about Jews could lead him into error.”—John Jeremiah Sullivan, Salon

“Grafton and Weinberg patiently sift through Casaubon’s literary remains, devoting to them the same kind of sensitive, humane, and yet analytical philological care that Casaubon devoted to his Greek texts.”—Alan Jacobs, Books & Culture

“[‘I Have Always Loved the Holy Tongue’] combines great learning with enviable accessibility and can be enjoyed at various levels, first of all as an informed look at the enterprise of historical-linguistic scholarship in Europe during the decades surrounding 1600. The volume also furnishes an appealing portrait of the individual scholarly pains (and they were literally that) taken by Casaubon in tracking down the customs of early Christianity; one watches over the Huguenot’s shoulder as he scratches endless notes (in Latin mostly) on texts he is working through (‘rubbish, rubbish, rubbish’ is a memorable example). Particularly notable are two case studies of Casaubon’s dealings with contemporary Jews—factual tales rendered with a narrative flair evoking Nabokov or Ozick, rather than supposedly dry-as-dust intellectual history.”—E.D. Hill, Choice

“Casaubon never published any book on Hebrew or Jewish topics. But Anthony Grafton and Joanna Weinberg, two eminent historians of Renaissance scholarship, convincingly make the case in their fascinating and gorgeously produced book ‘I Have Always Loved the Holy Tongue’ that he was nonetheless an industrious Hebraist whose study of and familiarity with Hebrew should be added to his outstanding achievements in Greek and Latin scholarship… One gets a sense of Casaubon’s sheer delight in reading Hebrew texts, deciphering roots of words, and, above all, catching colleagues’ mistakes (not much has changed in the Republic of Letters). In their love for both the subject matter and the protagonist of their book, and their pleasure in the detective work, Grafton and Weinberg bring Casaubon’s own joy to life.”—Moshe Sluhovsky, The Jerusalem Post

“Magnificent… Grafton and Weinberg have pieced together and made coherent sense of the scholar’s abundant if often barely legible marginal notes to the works of Hebraica and Judaica that he aggressively acquired and industriously studied. Their decipherment of these rich marginalia, together with the evidence of Casaubon’s massive diaries and almost 3,000 letters, yields an eye-opening portrait of an enigmatic 16th-century classicist. It also exposes some of the earliest and deepest roots of the lasting Huguenot sympathy for the Jewish people.”—Allan Nadler, Jewish Ideas Daily

“Fascinating… It is precisely because Casaubon was a second-tier Hebraist that Grafton and Weinberg’s recovery of his study of Hebraica, and its role in his larger intellectual project, is so important. If the last several decades have left little doubt that Christian Hebraism was a central feature of Renaissance thought, Grafton and Weinberg have now begun to show how this helps to illuminate and enlarge our appreciation of scholars and divines beyond the core group of specialists. It is certainly not the key to all mythologies, but Casaubon’s interest in Hebraic studies becomes, in the expert hands of Grafton and Weinberg, a means for appreciating how Hebraism shaped the philological, theological, and historiographical endeavors for which Casaubon was celebrated. ‘I Have Always Loved the Holy Tongue’—the title taken from one of Casaubon’s letters to [Johann] Buxtorf in 1610—is a gorgeously produced volume; more importantly, it is accessibly written. I confess a combination of admiration and envy for the astonishing textual detective work on display.”—Jeffrey Shoulson, The Jewish Review of Books

“Anthony Grafton and Joanna Weinberg introduce us to this strong, determined scholar by considering a particularly illuminating and unusual aspect of his scholarly life: his efforts to study Hebrew in depth. To do so, in Casaubon’s circumstances, was not a simple task. If Christians were at one another’s throats during the Reformation, the prospects were still more dire for Jews… In their account of Casaubon’s Hebrew studies, Grafton and Weinberg have illuminated far more than the scholar; they have done much to reveal the multiple sides of a deeply sympathetic figure who must have been, in many respects, a thoroughly modern man.”—Ingrid D. Rowland, The New York Review of Books

“Grafton and Weinberg’s thoroughly researched account of Casaubon—not only his study of Hebrew texts but also his complicated relationship with Jewish friends, suggesting that ‘his openness to Judaism as a larger world had certain limits’—succeeds through clear syntheses and thoughtful dissections of the many primary sources involved, rendering this academic text refreshingly accessible.”—Publishers Weekly

“In the new story told by these two eminent authorities, Casaubon remains the great Hellenist known to Pattison, but he becomes much more. He is now a pioneering student of Hebrew texts and a Christian ascetic who turned Hellenic and Hebrew philology into Protestant piety… The book underlines the importance of late antiquity and early Christianity, which until recently, were not very visible in Anglophone scholarship: Grafton and Weinberg go far to reveal the roots of this exciting field.”—Brian Copenhaver, University of California, Los Angeles

“‘I Have Always Loved the Holy Tongue’ is a wonderful work of scholarship and a sheer delight to read. The book is significant beyond the authors’ brilliant reconstruction of Isaac Casaubon’s Hebraic passions. It provides a model on how to study Hebrew and Aramaic texts alongside Greek and Latin ones to the mutual benefit of both disciplines. It illustrates what exciting rewards exist for the industrious scholar willing to peruse hand-written journals and scribbled annotations on the pages of printed books. Both Grafton and Weinberg acknowledge their debts to their late teacher Arnaldo Momigliano, the great classical scholar. He especially would have appreciated their remarkable collaborative achievement.”—David B. Ruderman, University of Pennsylvania

“This book is nothing short of a masterpiece, combining in an unprecedented way sound philological expertise with historical ingenuity and creativity. The rediscovery of Casaubon as a dedicated student of Jewish learning will revolutionize the history of Christian Hebraism.”—Peter Schäfer, Princeton University