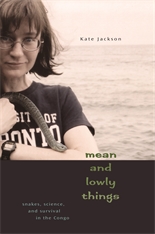 Snakes, Science, and Survival in the Congo

In 2005 Kate Jackson ventured into the remote swamp forests of the northern Congo to collect reptiles and amphibians. Her camping equipment was rudimentary, her knowledge of Congolese customs even more so. She knew how to string a net and set a pitfall trap, but she never imagined the physical and cultural difficulties that awaited her.

Culled from the mud-spattered pages of her journals, Mean and Lowly Things reads like a fast-paced adventure story. It is Jackson’s unvarnished account of her research on the front lines of the global biodiversity crisis—coping with interminable delays in obtaining permits, learning to outrun advancing army ants, subsisting on a diet of Spam and manioc, and ultimately falling in love with the strangely beautiful flooded forest.

The reptile fauna of the Republic of Congo was all but undescribed, and Jackson’s mission was to carry out the most basic study of the amphibians and reptiles of the swamp forest: to create a simple list of the species that exist there—a crucial first step toward efforts to protect them. When the snakes evaded her carefully set traps, Jackson enlisted people from the villages to bring her specimens. She trained her guide to tag frogs and skinks and to fix them in formalin. As her expensive camera rusted and her Western soap melted, Jackson learned what it took to swim with the snakes—and that there’s a right way and a wrong way to get a baby cobra out of a bottle.