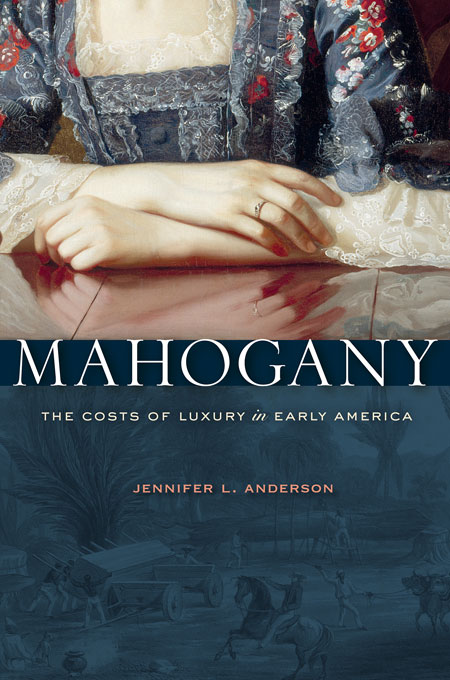 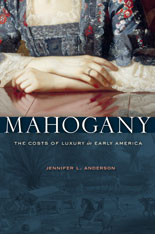 The Costs of Luxury in Early America

“[A] fascinating book about the most coveted wood in early America and, indeed, the 18th-century British Empire… This enlightening…study does for mahogany what others long ago did for sugar and tobacco, chocolate and coffee, rubber and bananas… From an impressive number of archival sources [Anderson] has assembled a vibrant collective portrait of colonial grandees—Benjamin and William Franklin, among them—declaring their social dominance through hard-won mahogany possessions.”—Kirk Davis Swinehart, The Wall Street Journal

“From the 1720s to the mid-19th century, mahogany was the preeminent medium for conspicuous consumption on both sides of the Atlantic… However, as Anderson’s superb [book] makes abundantly clear, the polished luster of these immaculate objects came from exploitative labor practices, ecological devastation, and phenomenal business failures, all of which attested to the commodity’s natural and human cost… Anderson’s is a remarkable contribution to Atlantic history that…will be much enjoyed by anyone interested in the history of trade in colonial America and the Caribbean.”—Brian Odom, Library Journal

“Anderson details the history of the search for, trade in, and use of mahogany. Though the title directs readers to early America, for Anderson, America is in reality the Atlantic world. Most of the author’s time is spent among the islands of the Caribbean or near the Bay of Honduras in Belize, where mahogany was harvested. Anderson paints a picture of the Atlantic world in which travel and trade were the norm and families lived and worked up and down the coasts of North and Central America as well as on numerous Caribbean islands.”—S. A. Jacobe, Choice

“Anderson’s evocative and stunning Mahogany reminds us of both the deep ties between humans and trees and the sharp consequences of allowing our passion for beauty to trump nature’s capacity to sustain a species.”—Peter C. Mancall, author of Fatal Journey: The Final Expedition of Henry Hudson

“This superb study of a vital early American commodity focuses on its production, distribution, and consumption from the age of sail to the era of steam. Mahogany’s sumptuousness came at a severe price, somewhat offset by enhanced knowledge of its properties and opportunities in its harvesting. With its highly nuanced and sophisticated argument, this book deserves a wide readership.”—Philip Morgan, author of Slave Counterpoint: Black Culture in the Eighteenth-Century Chesapeake and Lowcountry

“‘When you drink the water, think of the well-digger,’ is folk wisdom around the world. Anderson wisely adds, when you see elegant mahogany furniture, think of the hard-handed African slave hacking away, under deadly working conditions, at a tall hardwood tree in a hot, dense Caribbean rainforest. Like Sidney Mintz’s classic study of sugar, Sweetness and Power, this book makes us see the familiar in new and disturbing ways.”—Marcus Rediker, author of The Slave Ship: A Human History