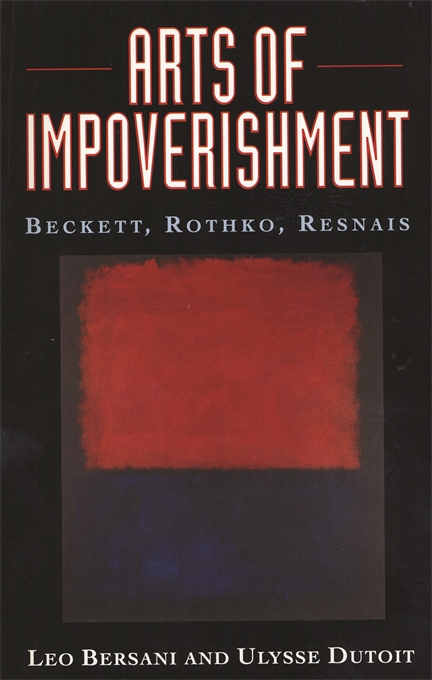 “How almost true they sometimes almost ring!” Samuel Beckett’s character rues his words. “How wanting in inanity!” A person could almost understand them! Why taunt and flout us, as Beckett’s writing does? Why discourage us from seeing, as Mark Rothko’s paintings often can? Why immobilize and daze us, as Alain Resnais’s films sometimes will? Why, Leo Bersani and Ulysse Dutoit ask, would three acknowledged masters of their media make work deliberately opaque and inhospitable to an audience? This book shows us how such crippling moves may signal a profoundly original—and profoundly anti-modernist—renunciation of art’s authority.

Our culture, while paying little attention to art, puts great faith in its edifying and enlightening value. Yet Beckett’s threadbare plays Company and Worstward Ho, so insistent on their poverty of meaning; Rothko’s nearly monochromatic paintings in the Houston Chapel; Resnais’s intensely self-contained, self-referential films Night and Fog and Muriel all seem to say, “I have little to show you, little to tell you, nothing to teach you.” Bersani and Dutoit consider these works as acts of resistance; by inhibiting our movement toward them, they purposely frustrate our faith in art as a way of appropriating and ultimately mastering reality.

As this book demonstrates, these artists train us in new modes of mobility, which differ from the moves of an appropriating consciousness. As a form of cultural resistance, a rejection of a view of reality—both objects and human subjects—as simply there for the taking, this training may even give birth to a new kind of political power, one paradoxically consistent with the renunciation of authority. In its movement among these three artists, Arts of Impoverishment traces a new form of movement within art.