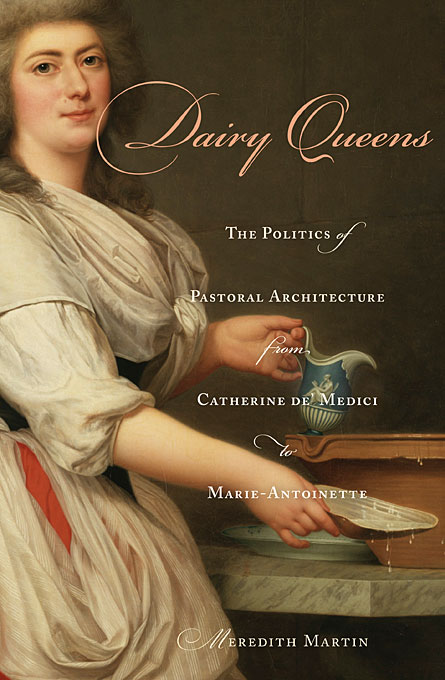 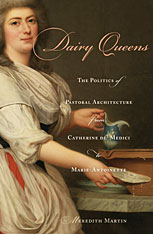 “[A] brilliant and gorgeous new book… Until now, little has been written about the pleasure dairy and this is certainly the first I’ve heard of it. An explanation for its disappearance from our cultural history and consciousness is that almost all of the actual buildings no longer exist. But the pleasure dairy’s gender coding and associations with female exclusivity and power is likely another reason. It is a testament to Meredith Martin’s talent as both writer and scholar that the pleasure dairy has now become so vivid in my imagination, a part of our political and cultural history, that I feel as if I have always known about the phenomenon, Martin’s book serving as an exquisite reminder.”—Jenny McPhee, Bookslut

“Marie Antoinette herding sheep and milking cows in the peasant hamlet that she built at Versailles seems the least likely subject for an essay in cultural history. Yet, as Martin shows in her stunning work of scholarship, the queen’s interest in pastoral retreats—dairies in particular—was an established and complex court tradition going back to Catherine de’ Medici in the 16th century. Martin argues that Catherine, a foreign consort to Henri II, and thus particularly vulnerable to the machinations of a chauvinist court, erected a dairy at her estate to ally herself to ideas of regal fertility, purity, and maternal care as a means of deflecting criticism. Later, during the reign of Louis XIV, the aristocrats who resisted the Sun King’s efforts to centralize power at Versailles constructed at their country properties ‘pleasure dairies’ and picturesque gardens as symbols of their repudiation of courtly life and affirmation of feudal order. By the mid-18th century, reformist ideas about responsible child-rearing and proper sanitation encouraged Mme. Pompadour to reintroduce dairies to Versailles. Marie Antoinette’s seemingly frivolous exercise in peasant rusticity, then, should be seen as a continuance of elitist expressions of virtuous behavior.”—L.R. Matteson, Choice

“Most of us are acquainted with tales of Marie-Antoinette’s faux-pastoral activities—her hamlet at Versailles, equipped with a ‘pleasure dairy,’ where she dressed as a milkmaid and churned butter with her aristocratic pals. In her meticulously researched book, Martin places this diversion into its historical context. Discussing the tradition that celebrated the virtues of rural living, milk, and maternal care as means of social reform, Martin’s wonderful book never fails to surprise and enlighten us.”—Francine du Plessix Gray

“Dairy Queens is a wonderful book, which I read with sustained pleasure. From Catherine de Medici to Marie-Antoinette, French queens and royal mistresses ordered the creation of dairy farms that became the intersecting sites of important architectural, decorative, and cultural trends. Martin deals with a plethora of subjects in this informed book, ranging from the prestige of milk baths and personal hygiene to politics. Readers will learn something new on every page.”—Patrice Higonnet, Harvard University

“An innovative and pathbreaking study. Martin demolishes the assumption that pleasure dairies were the frivolous products of a ‘let-them-eat-cake’ state of mind. They helped shape a range of significant discourses on health, femininity, nobility, pleasure, nature, and utility. Written in clear, lucid prose, this book will appeal to a wide readership.”—Mary Sheriff, University of North Carolina, Chapel Hill