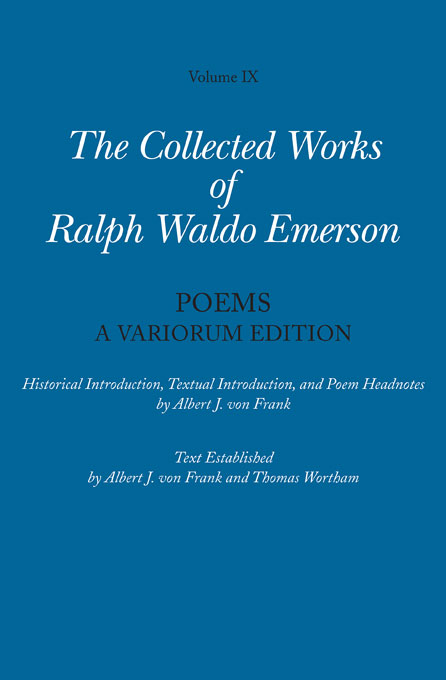 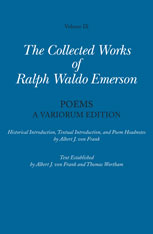 At his death in 1882, Ralph Waldo Emerson was counted among the greatest poets in nineteenth-century America. This variorum edition of all the poems Emerson chose for publication during his lifetime offers readers the opportunity to situate Emerson’s poetic achievement alongside his celebrated essays and to consider their interrelationship.

Decades before Walt Whitman and Emily Dickinson took their places in the firmament of American poets, Emerson was securely enthroned. Though his reputation as essayist now eclipses his reputation as poet, Emerson self-identified as a writer of verse and worked out his transcendental philosophy in this genre, establishing his belief in the authority of individual experience and in the essential metaphoric nature of language. Albert J. von Frank’s historical introduction traces the development of Emerson the poet, considering how life events, as well as his reading of German philosophy and Sufi poetry, influenced his thought and expression. Alongside accounts of the critical reception of his poems are public and private writings that reveal Emerson’s own estimation of his poetic project and achievement.

The textual introduction and apparatus make transparent the theoretical and practical concerns that inform these critical texts. Also included are a chronological lists of variants and texts constituting the historical collation, notes clarifying obscure allusions, and headnotes identifying sources and context.