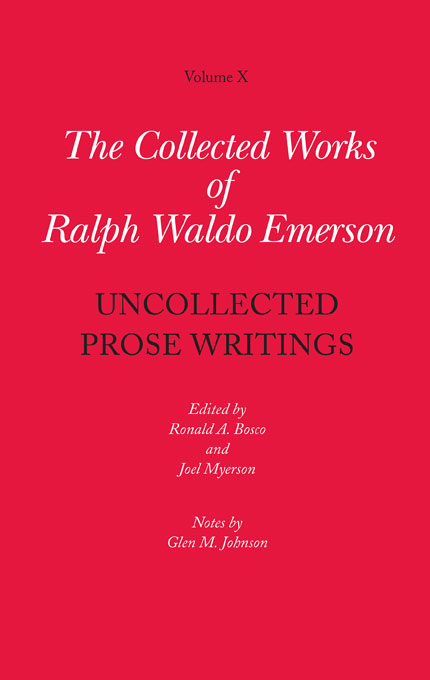 With the appearance of the tenth and final volume of Collected Works, a project fifty years in the making reaches completion: the publication of critically edited texts of all of Ralph Waldo Emerson’s works published in his lifetime and under his supervision. The Uncollected Prose Writings is the definitive gathering of Emerson’s previously published prose writings that he left uncollected at the time of his death.

The Uncollected Prose Writings supersedes the three posthumous volumes of Emerson’s prose that James Elliot Cabot and Edward Waldo Emerson added to his canon. Seeing as their primary task the expansion of the Emerson canon, they embellished and improvised. By contrast, Ronald A. Bosco and Joel Myerson have undertaken the restoration of Emerson’s uncollected prose canon, printing only what Emerson alone wrote, authorized for publication, and saw into print.

In their Historical Introduction and Textual Introduction, the editors survey the sweep of Emerson’s uncollected published prose. The evidence they marshal reveals Emerson’s progressive reliance on lectures as forerunners to his published prose in major periodicals and clarifies what has been a slowly emerging portrait of the last decade and a half of his life as a public intellectual.