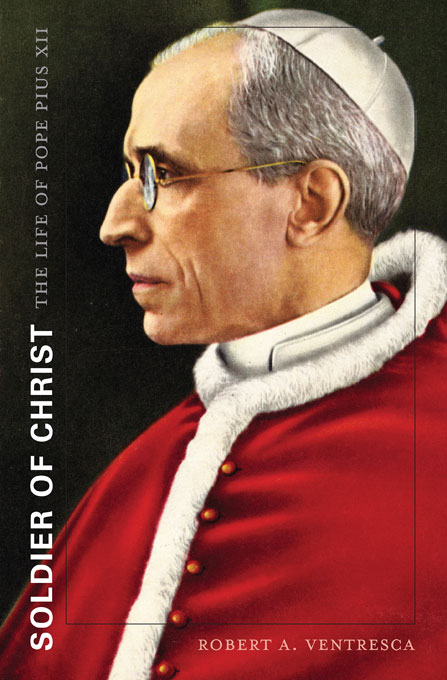 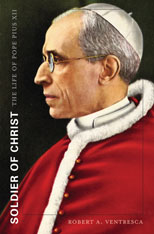 The Life of Pope Pius XII

“Ventresca has…successfully captured Pacelli in the round, with telling…details of human interest… For those who have no vested interest on either side of the divide, there [is] now [a] reliable…stud[y] of one of the most enigmatic figures of twentieth-century history.”—John Cornwell, The Times Literary Supplement

“Refreshing… Robert Ventresca…combines meticulous scholarship with an elegant and effective prose style that makes this a very readable and accessible book… The most serious and dispassionate biography so far of this controversial pontiff.”—John Pollard, Times Higher Education

“[A] welcome new biograph[y]… The detailed picture that emerges of Pacelli’s diplomatic career and years as secretary of state brings a new depth to our understanding of this austere and complicated man. Studies of Pius have too often made cases for the prosecution or the defense, in which Pacelli features as a monster or a saint… [Soldier of Christ] provides a rounded and persuasive portrait of flawed greatness.”—Eamon Duffy, London Review of Books

“Pius XII, more than most popes, was a polarizing figure, and previous studies of his pontificate have, accordingly, tended to be either fiercely polemical, if from his critics, or bordering on the hagiographical, if from his defenders. This latest biography by Robert Ventresca…strives to avoid these extremes. Ventresca builds his case from an impressive marshaling of the available evidence. It is cogently argued, and lucidly, if soberly, written. Pacelli’s human qualities are apparent… He was certainly a man who at a time of great moral challenge strove to do his best, for the church and for those who faced dehumanizing imprisonment and death at the hands of a monstrous tyranny. The history of the Holocaust is testimony that his best was not good enough, and he is not the only European leader between 1933 and 1945 about whom that can be said. The question that should haunt his defenders, however, is not whether he could have deterred the Nazis by publicly denouncing their crimes; it is whether his silence actually emboldened them.”—Ray Cassin, Australian Book Review

“Most of the books about Pius [XII] judge him, positively or negatively, based upon his policies during that period. Ventresca sets Pius’ decisions within the larger context of his life and achievements, bringing a fresh perspective to what has aptly been described as ‘the Pius war.’”—Eugene Fisher, The Catholic Herald

“With Soldier of Christ, Robert Ventresca has provided a real service, not only to the historical profession but also to the wider community… Ventresca makes every effort to be objective and balanced in his presentation of the controversial wartime pope. In this, he makes a refreshing and needed contribution to what has become a sometimes rancorous debate, which has more assertion of opinion than serious archival research.”—Gerald P. Fogarty, National Catholic Reporter

“Ventresca diligently works to establish a perspective on the pope that is not confined to the controversies that continue to swirl around his legacy: his reputed inaction during the Holocaust, the debates around his cause for canonization, his involvement with the shaping of post–World War Two Europe and his alleged reactionary approach to modernity in all its forms. The actual record, of course, is both more complicated and ambiguous, and Ventresca labors admirably to ensure that his portrait of Pacelli eschews the polarizing rhetoric, selective indignation and pious piffle that has defined the work of the pro- and anti-Pacellists over the last three decades… Ventresca’s biography, by contrast, is defined by its meticulous reliance on archival materials, its avoidance of polemical fire and its measured assessment of the complex factors that shape a pontificate.”—Michael W. Higgins, Literary Review of Canada

“Soldier of Christ is immaculately researched, well-written and judicious in its judgments, and it deserves serious consideration in the ongoing debate about the role of the Vatican in the face of the utter immorality of Nazi policies.”—Allen Mills, The Winnipeg Free Press

“The definitive biography of the wartime pontiff… Soldier of Christ: The Life of Pope Pius XII is a splendid work.”—Michael Coren, Catholic World Report

“[An] illuminating work.”—Paul Richardson, The Church of England Newspaper

“Eugenio Pacelli, who acceded to the papacy in March 1939, was the first Roman pope since the early 1700s. His tenure, which lasted until his death in 1958, remains highly controversial. Robert Ventresca’s book is an intervention in the ‘Pius war’—the argument over Pius XII’s seeming failure to defend European Jews from persecution by the Nazis.”—New Statesman

“Ventresca paints a well-crafted portrait of Pacelli’s remarkable consistency, deciding early on that pragmatism was his goal in both spiritual and temporal matters.”—Megan Moore Burns, Quill & Quire

“While refreshingly avoiding the overt polemics of the ‘Pius War,’ Ventresca gives us a pope deserving of sympathy yet amenable to criticism. This tension is the signal contribution of the newest biography of Pius XII. Future biographies will come closer to ‘the life’ by providing a more integrated approach to the pope’s strengths and weaknesses and a richer account of his papacy after 1945.”—Hilmar Pabel, The Tablet

“Ventresca does a thorough job sifting through the evidence of the complicated life and papacy of Pius XII, while keeping an open mind to the conclusion… An authoritative study of a deeply flawed and tragic figure of history.”—Kirkus Reviews

“Avoiding the extremes of vilification and hagiography, this well-crafted biography examines Pope Pius XII’s early life, his service in the Vatican diplomatic corps and as secretary of state to his predecessor, and his papal reign during World War II, including the ‘so-called silence,’ as Ventresca puts it, for which the pope has been roundly criticized… A balanced, but not uncritical, examination of the life of a controversial pope, seeking to understand Pius in the context of his times, this study will appeal to anyone interested in Church history, World War II, or general modern world history.”—Augustine J. Curley, Library Journal

“This beautifully written biography will become the standard account of Pope Pius XII’s life. In Ventresca’s hands, this enigmatic Pope is neither lionized nor demonized. Instead, we see Pius XII as a soldier mired in the trenches, neither advancing nor wholly retreating into silence.”—Charles R. Gallagher, author of Vatican Secret Diplomacy: Joseph P. Hurley and Pope Pius XII