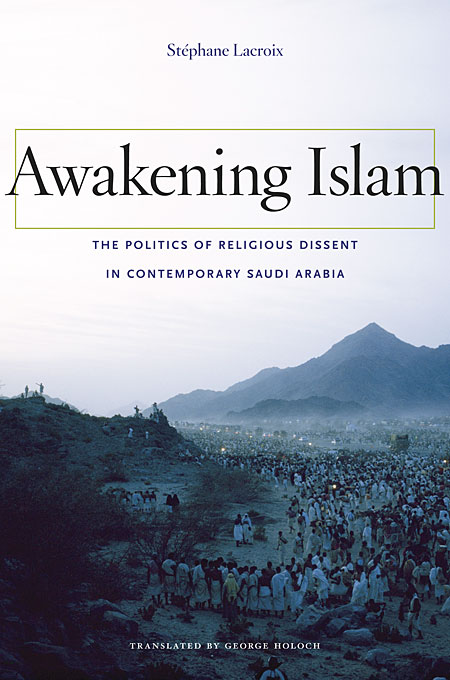 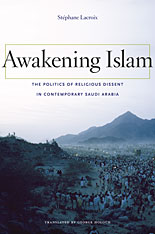 The Politics of Religious Dissent in Contemporary Saudi Arabia

“A timely work, especially when read against the backdrop of antigovernment demonstrations taking place across the Middle East and North Africa today.”—Christopher McConnell, Booklist

“Awakening Islam is bound to be the definitive account of how the Muslim Brotherhood took root in the kingdom and reshaped its religious landscape.”—David Commins, Christian Century

“Little attention is paid to Saudi Arabia’s internal Islamist movements. During the decades before the 1990s, the kingdom actively fostered the Sahwa, or ‘Islamic awakening,’ a movement led by local activists that was as political as it was religious. In his meticulously researched book, Stéphane Lacroix provides an exhaustive history of the Sahwa, detailing the movement’s original constituents—Muslim émigrés fleeing persecution from other states in the region—and its importance to the Saudi social and political spheres. For decades, Saudi leaders supported the group’s activities, even though their ideas were not entirely in line with state-sanctioned Wahhabism. This ended when Saddam Hussein invaded the country in 1990. The Saudis’ reliance on American military assistance expedited the Sahwa’s radicalization and ultimately led to its downfall. Among the splinters that remained were a group of neo-Jihadis who turned against the kingdom’s rulers and stood behind Osama bin Laden’s philosophy of holy war. Lacroix’s authoritative history sheds light on how this homegrown movement became influential throughout the region and created some blowback of its own.”—Atossa Abrahamian, The Daily

“Awakening Islam is an astonishingly rich, detailed analysis of the fascinating world of Saudi Islamism. The young French scholar Stéphane Lacroix spent significant time in Saudi Arabia, and got deep inside the competing networks that have shaped Saudi Arabia’s distinctive Islamist milieu. He unpacks the role of Muslim Brothers and Salafis and their sometimes-uneasy relationship with the state. He carefully traces the evolution of the Sahwa (Awakening) networks, and how they both carried political dissent and restructured the pathways of political mobilization. And while he certainly pays attention to militant jihadism and the worldview which helped spawn al-Qaeda, that does not overwhelm his broader analytical mission. This book is simply an extraordinary accomplishment, and should be required reading for anyone interested in the politics of Islam.”—Marc Lynch, Foreign Policy

“Looking at the Muslim misfits of the past half-century and how many received refuge in Saudi Arabia, Parisian professor Stéphane Lacroix argues that the resulting movement has yielded two opposing camps—the Islamo-liberals and the neo-jihadis, both headquartered out of that Islamic heartland.”—Asma Gull Hasan, Publishers Weekly

“Al-Sahwa Al-Islamiyya or ‘Islamic Awakening’ was one of the most powerful social movements in the history of Saudi Arabia. It is also one of the least documented—until now. Stéphane Lacroix tells the story of this movement in his splendid new book… Lacroix’s study is timely and original. Serious students of Saudi Arabia need to read this important book. They will be enlightened by it and moved to seek more knowledge about the Kingdom.”—Joseph Richard Preville, The Saudi Gazette

“Awakening Islam is the benchmark against which books on the vital intersection between religion and politics in Saudi Arabia will now be measured. It sheds light not only on Saudi Arabia, but on the fluid undercurrents of religious politics in many neighboring countries.”—Dale F. Eickelman, Dartmouth College

“Based on intimate knowledge of the militants, Lacroix’s pioneering analysis of the history and politics of Saudi Islamists is, and will remain, a classic.”—Gilles Kepel, author of Jihad and Beyond Terror and Martyrdom

“An extraordinary contribution that reshapes our understanding of Saudi Arabia and of Islamic politics in the Middle East. Lacroix takes us deep inside the evolution of the Sahwa and its competitors in Saudi Arabia, with unprecedented access to participants and a close reading of a vast array of rare sources.”—Marc Lynch, Director, Institute for Middle East Studies, George Washington University

“The Sahwa movement played a crucial role in shaping politically-oriented religious discourse in Saudi Arabia and beyond. Yet the movement is little understood and its ideas much misinterpreted. Lacroix’s dispassionate, far-reaching and well-informed analysis provides an essential resource for the understanding of this critical phenomenon.”—Tim Niblock, University of Exeter