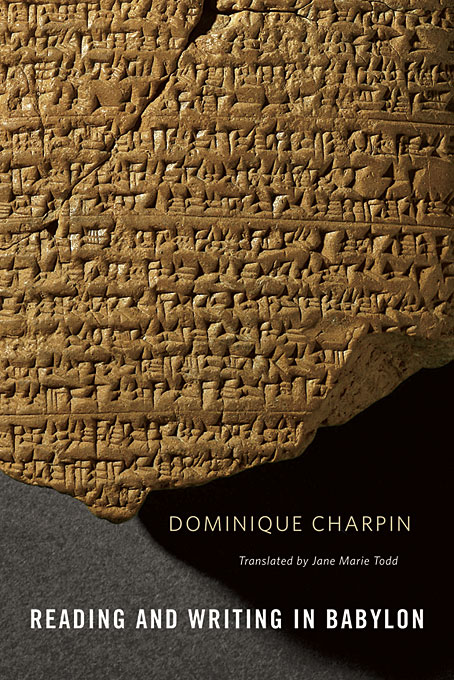 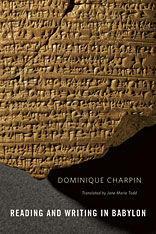 Reading and Writing in Babylon

“[Reading and Writing in Babylon] is a groundbreaking and fascinating contribution to the study of ancient literacy, readable by all-comers.”—Eleanor Robson, The Times Literary Supplement

“Charpin has written a book that is accessible to those outside the small academic field of Assyriology. The work is remarkable for its level of detail and the breadth of its concern. Charpin is able to keep one eye on the specifics of numerous texts and their archaeological contexts. At the same time, he is able to situate the written legacy of these ancient cultures in a broad sociological context, while arguing in some places for a generally new approach to reading and integrating the wealth of material into cognate fields.”—Phillip Michael Sherman, Bryn Mawr Classical Review

“Charpin takes up a subject that’s been debated by Assyriologists for many years: Did scribes alone have the knowledge to read and write cuneiform, the earliest writing, invented by the Sumerians around 3200 B.C.E.? Charpin focuses on what may be called the ‘classical’ period of Mesopotamian civilization, the period between the Babylonian rulers Hammurabi (1792–1750 B.C.E.) to Nebuchadnezzar (604–562 B.C.E.). Charpin’s work at Ur some 20 years ago convinced him that what was thought to be a school was in fact a residence for clergy who home trained their children and apprentices to read and write cuneiform. His research has convinced him that literacy was not limited to professional scribes. The depth and range of material Charpin includes is indeed impressive. In sections that will be of particular interest to lay readers and students, Charpin goes into detail about reading a cuneiform tablet and the apprenticeship of a scribe. He informs the reader that the oral, spoken word—Sumerian or Akkadian—was most important in Mesopotamian society, and it was the survival of the written over the spoken word that produced the expansion of writing. Required reading for scholars in the field and their students.”—Joan W. Gartland, Library Journal

“This introduction to the birth of cuneiform writing in the Babylonian empire is an engaging primer on the lexicon of linguistics… Charpin has written a scholarly work of incredible breadth.”—Publishers Weekly

“Many books have been written on the origins of the cuneiform script and the role of reading and writing in Mesopotamia. But Charpin’s book has no rival that could even stand in its shade.”—Karel van der Toorn, President, University of Amsterdam, and author of Scribal Culture and the Making of the Hebrew Bible