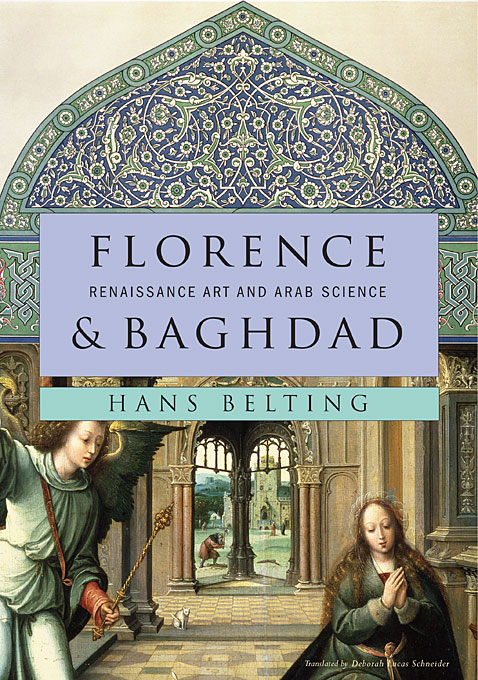 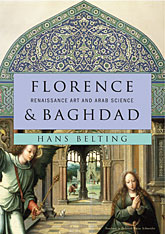 “Belting at his best writes with an infectious, ingenuous intellectual excitement… The book’s main remit is to spell out a sequence of conceptual changes in the meanings of vision and visual art running from antiquity to Islam and Western Christendom, and in this it is memorable and convincing… Belting has made a careful, honorable contribution to contemporary debates about culture clash.”—Julian Bell, London Review of Books

“Florentines remain convinced that their compatriots once invented central perspective. Yet matters were actually more complicated, as this fascinating book shows: The Arab mathematician Alhazen (965–1040) had discovered the path of light rays and constructed a camera obscura long before the Renaissance. He was concerned with the laws governing vision and not with realistic representations, which were alien to him as a member of a society without pictures. In his multifaceted new study, Hans Belting describes convincingly how artists and scholars turned Alhazen’s theory of vision into a theory of pictures and made perspective a trademark of the West. He also explains the significance of geometry for the Islamic worldview and Islamic art. This book is an eye-opener for readers who will come to understand the limitations and drawbacks of the kinds of images that are omnipresent in our society in the form of films and photographs.”—Art: Das Kunstmagazin

“Florence and Baghdad is…in large part a meditation on the nature of symbolic forms and consequently an interrogation of the neo-Kantian ideas of Ernst Cassirer and Ernst Panofsky… Belting…convincingly shows how the Arab geometrical approach was taken up in the West and transformed into a way of portraying spatial depth. Moreover, unlike Panofsky, his contrasting of Western and Islamic art leads to an exploration of the different ways in which the two cultures conceive the ‘gaze.’… Florence and Baghdad is beautifully illustrated… This frankly difficult book provides challenging exercises for the mind.”—Robert Irwin, The Art Newspaper

“In Florence and Baghdad: Renaissance Art and Arab Science, Belting makes a compelling case that the vision of the Renaissance—a vision that still holds us today—began not in Florence, but in Baghdad, with important implications for both cultures… Reproducing the complexity of Belting’s argument here seems like ‘playing God,’ too, in capturing the majesty of his examples and endless connections (all wonderfully translated from the original German by Deborah Lucas Schneider). The combination of illustrations and verbal explanations on the nature of Islamic aniconism surpasses any previous discussion I’ve read, making the sometimes daunting trek through the forest of soaring ideas well worth the trip once you’ve reached the clearing of Belting’s payoff. The real strength of Florence and Baghdad is how Belting puts those two worlds on equal footing—side by side in coming to grips with the same idea in a way determined by their culture. In first warning himself of the dangers of Eurocentrism and colonialism whenever you talk of ‘influence,’ Belting warns us of similar mistakes. ‘Linear perspective is not universal but rather tied to a particular culture,’ Belting concludes, allowing for the difference of Arabic versus Christian art while also providing discursive space to analyze how and why they differ, and what that difference may mean to us… From Africa to Asia to the Middle East, the Western way of seeing in perspective—individualized, human-centered perspective—eliminated all other ways of seeing and, along with them, ways of cultural being. Hans Belting’s Florence and Baghdad: Renaissance Art and Arab Science strikes the first blow for reversing the tide of that visual encroachment, or at the very least of recognizing the cultural blindness of imposed ways of seeing and how that blindness continues to keep the Middle East and West from seeing eye to eye.”—Bob Duggan, BigThink.com

“It is hard to do justice to the brilliance and complexity of this book, which provides no less than a complete re-evaluation of the origins of perspective in Western art. Hans Belting, an internationally recognized authority on the theory of art from Hieronymus Bosch to Marcel Duchamp, argues that the scientific and artistic genesis of linear perspective did not come out of the Florence of Giotto and Brunelleschi as we are usually told by art historians, but instead first emerged in eleventh-century Baghdad in the work of lbn a1-Haytham (965–1040), a mathematician born in Basra who became known in the West as Alhazen, ‘the Arab Archimedes’… Florence and Baghdad is a remarkable and brave book which takes on a highly contentious area of East-West artistic, scientific and political exchange… It reads like a cross-cultural Ways of Seeing: it is about art and science, painting and mathematics, politics and religion, hermeneutics and phenomenology. Ultimately it is the book of a very fine scholar learning to think across cultures and resist simplistic separations at a time when this is most needed.”—Jerry Brotton, Literary Review

“In many respects this is a bold book, first of all because of its premise: a veteran art historian dares, after half a century as an active scholar, to take another look at a classic art-historical problem—the formulation of linear perspective in fifteenth-century Florence. It is perhaps the most classical art-historical problem of all… In Florence and Baghdad, the connection between East and West has all the excitement of a fresh discovery: in effect, Belting is relearning, and retelling, the story of perspective, this time not from Florence for Europeans, but rather on a global scale for a globalized world.”—Ingrid D. Rowland, The New Republic

“[A] lively and erudite book.”—Alexander Marr, The Times Literary Supplement

“It is at first appropriate to admire Belting’s book as a beautiful object. It contains a number of fine photos and illustrations, and it is a pleasure to just browse through it… Belting aspires to be one of the cultural milestones that change our essential views on art and visual culture. Florence and Baghdad is not just a well-written academic study, it is also a book accessible to a wide audience. Occasionally it even reads like a thriller. The best thing is, once you finish it, you realize it isn’t just amusing, but eye-opening.”—Filip Šenk, The Prague Post

“Belting has expanded our field of vision to include both the history of art and of science, in both Islam and the West, and by so doing has given research on central perspective an entirely new foundation.”—Friederike Reents, Frankfurter Allgemeine Zeitung

“Florence and Baghdad rewrites the history of European art… Belting’s book must be read with care and readers will do well to consult the illustrations again and again in order to understand how an Islamic theory of vision, which refuted the theory of little pictures in the eye, could turn into a technique for producing paintings used first by Florentines and then all over Europe. You will find no better guide through this thicket of philosophy, optics, crafts and theology in East and West than Belting—and certainly no one else could make it so clear that these are not just old problems we can gladly leave to historians… Belting’s book shows that if we look carefully we can still discover that most of what we thought we knew was wrong. Belting gives us a fresh new eye for art and the world.”—Arno Widmann, Frankfurter Rundschau

“Taking the different concepts of pictures in the two cultures as a starting point, the author offers a fascinating comparison of the way Arabs and Westerners look at the world. He explains for example the ‘prohibition of images’ in Islam and the new importance given to the subjective view of an observer in the European Renaissance. This is only one of many differences that have continued to affect the world to the present day—a fact that makes Belting’s history of art a highly topical book.”—Geo

“Belting demonstrates persuasively how Alhazen’s visual theory was converted into a pictorial theory in the West between the 13th and 15th centuries and finally led to central perspective… His aim with this noteworthy book is to make a contribution to the history of images and move beyond the ‘colonial’ viewpoint of the West.”—Willibald Sauerländer, Süddeutsche Zeitung

“The connection Belting establishes between long-known facts in the history of science and the origins of the “window view” is a stroke of genius.”—Süddeutsche Zeitung

“Belting admits that tracing the genealogy of perspective from Alhazen via Pelacani to architects and painters of the Renaissance involves gaps; there are no contemporary documents that prove specific influences. Yet the chain of evidence is impressive—all the more so because Belting’s immense erudition reaches beyond the borders of the field… It will be impossible to go back to the usual assumption that perspective was part of the lost legacy of classical antiquity and was merely made available again through Arabic translations of earlier works. First of all this error presumes an unrealistically high level of ancient mathematics, and secondly it depends on the view that Arab culture served only a mediator between two eras in the West. Perspective plays a key role in the Western gaze—and through media such as photography and film it became one of Europe’s leading exports, so to speak, as well as an instrument of colonization, a norm for the ‘natural’ mode of seeing. The fact that it is rooted in Arab science is one of the secrets that Western society has long tried to keep hidden from itself. Thanks to Hans Belting we now know better.”—Steffen Richter, Der Tagesspiegel

“At a time when people use the phrase ‘cultural dialogue’ as if it were a magic spell, Florence and Baghdad is a refreshing appeal to view the genesis of the unconscious visual foundations in both cultures in all their historical complexity and to illuminate their interdependence. While some of the ‘discoveries’ Belting presents (such as the roles played by Alhazen’s treatise on optics in the 11th century or by the Italian mathematician Biagio Pelacani around 1400) are not new to scholars in the field, the author’s achievement is to assign them the place they deserve in cultural history and make these insights available to a broad public. He has created a scholarly mosaic, accompanied by a wealth of illustrations, that will captivate readers through its elegance.”—Emmanuel Alloa, Die Tageszeitung

“Belting is not concerned with ‘influences’ or ‘derivations’; his aim is a comparison that will place both cultures on the same level and reveal the particular character of each. For this purpose he uses what he calls sudden ‘shifts of focus’ [Blickwechsel] to contrast his discussion of one pictorial culture with the differently oriented position of the other. The result is a text that is well calculated to delight readers and make them grateful that this other world existed.”—Martin Warnke, Die Zeit

“Belting easily balances the contributions of two diverse cultures—European art and Arabic science—in a deeply scholarly yet captivating manner. He presents the well-documented historical connection between a mathematic theory sprung from 11th-century Baghdad and its influence on the use of perspective in Renaissance-era European artists… The timely translation is excellent as ideas flow logically, past to present.”—Marianne Laino Sade, Library Journal