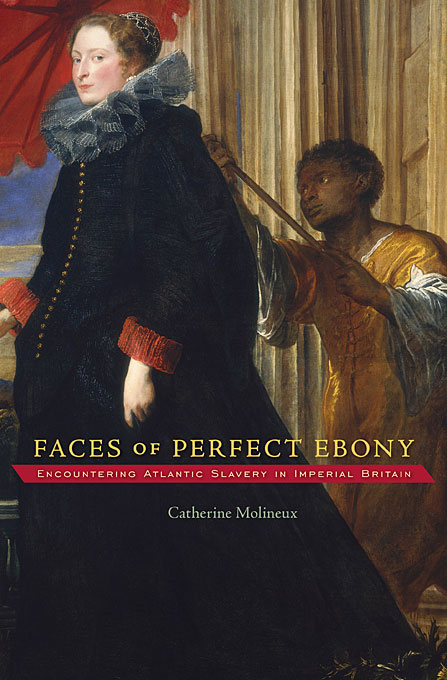 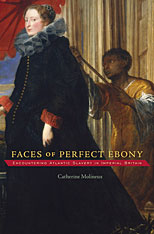 Though blacks were not often seen on the streets of seventeenth-century London, they were already capturing the British imagination. For two hundred years, as Britain shipped over three million Africans to the New World, popular images of blacks as slaves and servants proliferated in London art, both highbrow and low. Catherine Molineux assembles a surprising array of sources in her exploration of this emerging black presence, from shop signs, tea trays, trading cards, board games, playing cards, and song ballads to more familiar objects such as William Hogarth’s graphic satires. By idealizing black servitude and obscuring the brutalities of slavery, these images of black people became symbols of empire to a general populace that had little contact with the realities of slave life in the distant Americas and Caribbean.

The earliest images advertised the opulence of the British Empire by depicting black slaves and servants as minor, exotic characters who gazed adoringly at their masters. Later images showed Britons and Africans in friendly gatherings, smoking tobacco together, for example. By 1807, when Britain abolished the slave trade and thousands of people of African descent were living in London as free men and women, depictions of black laborers in local coffee houses, taverns, or kitchens took center stage.

Molineux’s well-crafted account provides rich evidence for the role that human traffic played in the popular consciousness and culture of Britain during the seventeenth and eighteenth centuries and deepens our understanding of how Britons imagined their burgeoning empire.