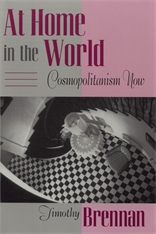 At Home in the World

From every quarter we hear of a new global culture, postcolonial, hybrid, announcing the death of nationalism, the arrival of cosmopolitanism. But under the drumbeat attending this trend, Timothy Brennan detects another, altogether different sound. Polemical, passionate, certain to provoke, his book exposes the drama being played out under the guise of globalism. A bracing critique of the critical self-indulgence that calls itself cosmopolitanism, it also takes note of the many countervailing forces acting against globalism in its facile, homogenizing sense.

The developments Brennan traces occur in many places—editorial pages, policy journals, corporate training manuals, and, primarily, in the arts. His subject takes him from George Orwell to Julia Kristeva, from Subcommandante Marcos to Julio Cortázar, from Ernst Bloch to contemporary apologists for transnational capitalism and “liberation management,” from “third world” writing to the Nobel Prize, with little of critical theory or cultural studies left untouched in between. Brennan gives extended treatment to two exemplary figures: the Trinidadian writer C. L. R. James, whose work suggests an alternative approach to cultural studies; and the Cuban writer Alejo Carpentier, whose appreciation of Cuban popular music cuts through the usual distinctions between mass and elite culture.

A critical call to arms, At Home in the World summons intellectuals and scholars to reinvigorate critical cultural studies. In stripping the false and heedless from the new cosmopolitanism, Brennan revitalizes the idea.