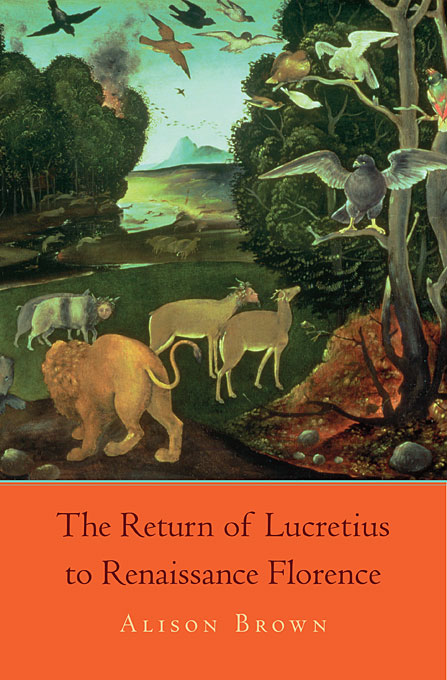 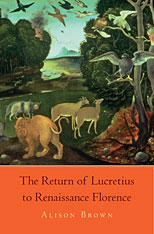 The Return of Lucretius to Renaissance Florence

“The rediscovery of Lucretius during the Renaissance invited readers to wonder whether God intervened in human affairs, even as they marveled at the understated, hauntingly beautiful Latin. Lucretius and his brand of Epicureanism were important to the period in all its manifestations, and now Brown offers a groundbreaking, clearly written study that every scholar concerned with the Italian Renaissance will want to read carefully.”—Christopher Celenza, Johns Hopkins University

“Alison Brown has made an important contribution to a crucial chapter in the history of modern thought. Tracking manuscript circulation and following a complex trail of hints and buried allusions, Brown explores the ways in which an ancient poem dangerously at odds with Christian orthodoxy subtly penetrated key intellectual networks.”—Stephen Greenblatt, Harvard University

“Brown has reconstructed, with rare skill and a discerning eye for textual detail and literary allusion, a crucial chapter in the intellectual history of the Renaissance. She uncovers not only the depth of Lucretius’s influence on leading Florentine humanists and political thinkers, including Machiavelli, but also the links among them that make this a tightly knit, unified story. This original and important book is a major contribution that will challenge current orthodoxies about Renaissance philosophy and religious thought and their relation to humanism and political ideas.”—John M. Najemy, Cornell University

“Brown unearths the roots of modern religious skepticism, atomism, and theories of the universe in the rediscovery of Epicurus and his Roman avatar Lucretius in fifteenth-century Florence. She charts the influence of his De rerum natura in the writings of Leonardo Bruni, Lorenzo Valla, Leon Battista Alberti, Marsilio Ficino, Niccolò Machiavelli, and others in a city increasingly torn by civil strife. This book is a must-read for all concerned not only with the humanist revolution in Renaissance Italy but also the origins of Enlightenment thought in Europe.”—Diana Robin, University of New Mexico