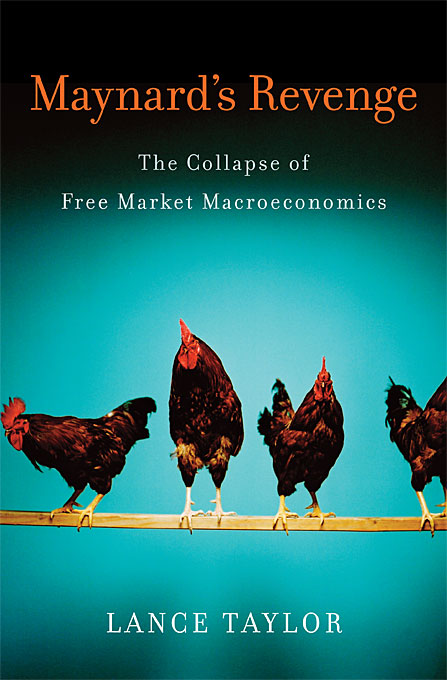 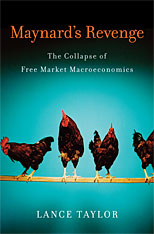 The Collapse of Free Market Macroeconomics

“[A] combative and tightly argued book on the collapse of the recent consensus in economics. Taylor strives to reinstate not just Keynes but an entire school of economics… The tone of the book fluctuates between being clinically academic and sharply polemical, a delightful combination often seen in the writings of Keynes himself… The deeper point Taylor makes is that much of modern economics is actually derived from insights provided by economists in previous ages. He powerfully illustrates this in almost every chapter in his book.”—Niranjan Rajadhyaksha, Mint

“This volume is useful, and even entertaining, when viewed as a paean to Keynes and his ideas.”—E. Kacapyr, Choice

“There is a need for a careful analysis of why exactly much of mainstream macroeconomics is irrelevant and problematic, and whether a more useful and realistic kind of economic analysis exists which can provide a better understanding of real world events. Lance Taylor’s book fills this need, providing an authoritative presentation of a more useful and realistic kind of macroeconomic analysis and deftly mingling theoretical analysis and critique with discussions of basic economic concepts. It is essential reading for anyone interested in how the economy works and how to make it work better and more humanely.”—Amitava Dutt, University of Notre Dame

“Lance Taylor has written a tome for our times. It is engaging and forceful, the analysis is of the highest order, and the exposition of very complex ideas is wonderfully clear.”—Geoffrey Harcourt, University of New South Wales

“Maynard’s Revenge offers a broad rigorous account of the creation, consolidation, and eventual eclipse of Keynesian theory, as well as the phoenix-like return of Keynesianism. With his nose to the empirical ground, Lance Taylor compellingly builds his case that Keynes was correct about how to do macroeconomics in our world. But Taylor goes beyond Keynes, showing how ‘ideas from the Master’ have been extended by his many disciples into an impressive body of thought.”—Servaas Storm, Delft University of Technology, the Netherlands