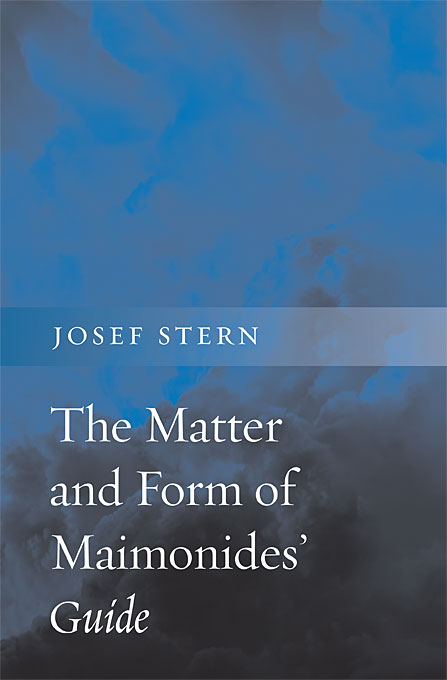 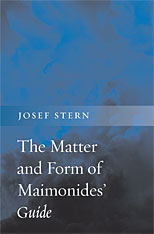 The Matter and Form of Maimonides' Guide

Maimonides’ Guide of the Perplexed has traditionally been read as an attempt to harmonize reason and revelation. Another, more recent interpretation takes the contradiction between philosophy and religion to be irreconcilable, and concludes that the Guide prescribes religion for the masses and philosophy for the elite. Moving beyond these familiar debates, Josef Stern argues that the perplexity addressed in this famously enigmatic work is not the conflict between Athens and Jerusalem but the tension between human matter and form, between the body and the intellect.

Maimonides’ philosophical tradition takes the perfect life to be intellectual: pure, undivided contemplation of all possible truths, from physics and cosmology to metaphysics and God. According to the Guide, this ideal cannot be realized by humans. Their embodied minds cannot achieve scientific knowledge of metaphysics, and their bodily impulses interfere with exclusive contemplation. Closely analyzing the arguments in the Guide and its original use of the parable as a medium of philosophical writing, Stern articulates Maimonides’ skepticism about human knowledge of metaphysics and his heterodox interpretations of scriptural and rabbinic parables. Stern shows how, in order to accommodate the conflicting demands of the intellect and the body, Maimonides creates a repertoire of spiritual exercises, reconceiving the Mosaic commandments as training for the life of the embodied mind. By focusing on the philosophical notions of matter and form, and the interplay between its literary form and subject matter, Stern succeeds in developing a unified, novel interpretation of the Guide.