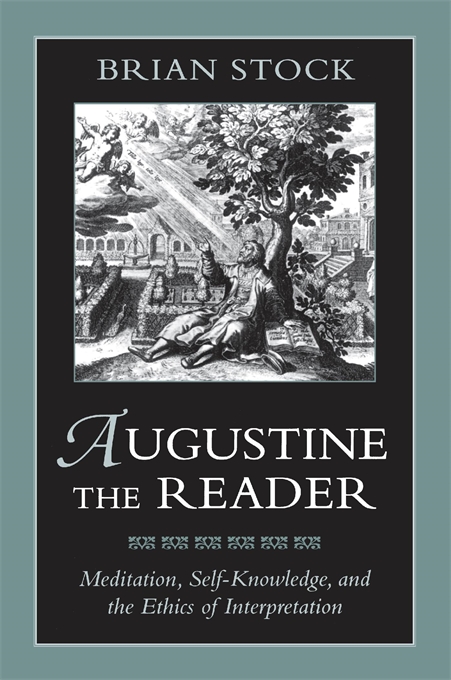 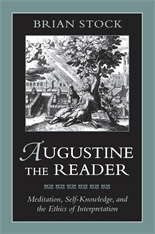 Meditation, Self-Knowledge, and the Ethics of Interpretation

“[Stock] display[s] an enviable and intimate knowledge of the text of Augustine, above all of his Confessions and, as the book progresses, of the De Trinitate.”—Anthony Meredith, SJ, Times Literary Supplement

“Through a comprehensive study of the primary sources and skillful textual analysis Stock has succeeded in producing a remarkable piece of scholarship and a very welcome contribution to both augustinian studies and the history of literary theory that opens up some exciting new avenues for future research.”—Andre F. Basson, Scholia: Natal Studies in Classical Antiquity

“Stock brings to his study of Augustine the reader a wealth of literary theory and a sensitivity to language that makes this book a very valuable contribution to the growing number of good studies of Augustine’s works. Anyone who reflects upon the central role played by reading in Augustine’s account of his own life in the Confessions will realize that Stock has found a topic central to that work.”—Roland J. Teske, S.J., Theological Studies

“Stock’s book, the first complete treatment of Augustine’s position [on reading], traces the evolution of Augustine’s doctrine through his early dialogues, the Confessions, and several of his more important later writings...This book is a creative and important introduction to a new way of looking at Augustine. It will interest philosophers, classicists, and students of literature.”—Choice

“This is the most insightful and careful reading of Augustine that has been produced in the last decade. Stock is an absolute master of Augustine’s texts and his knowledge of the secondary literature in French, German, and Italian may be unparalleled in the history of Augustine studies. Stock ably sums up Augustine’s intricate arguments, be they in the De Dialectica or in the De Magistro. Yet Stock feels comfortable in offering a critique of Augustine, e.g., when speaking about caput and sarabarae...I wholeheartedly recommend this work to Augustine scholars. For aficionados of Augustine Stock offers us a veritable intellectual feast.”—Richard Penaskovic, Journal of the American Academy of Religion

“This is an impressively learned, thoughtful, elegantly written book. Writing clearly and simply about Augustine is a very difficult thing to do, both because he wrote (or dictated) so much that survives and because he was so consistently aware of the implications and cross-connections of the words he used...[Stock] opts for following [Augustine’s] argument through sections (typically books) of his work, rather than for putting together short extracts or sentences from several texts on related subjects...His technique is to provide a narrative account of the text in such a way as to convey his interpretation of what the text is saying. The commentary thus offered is both lucid and rich, especially on Confessions, and makes even De utilitate credendi sound promising.”—Gillian Clark, Classical Review

“The book is entirely original. What it does has not been previously attempted--except perhaps in small-scale and fragmentary, article form. It is a reading of Augustine which is on the one hand entirely scholarly and rigorous; on the other hand, it is at the same time focused in terms of a modern preoccupation--concern, in this case, with text and textual understanding. This sort of interest has been gaining ground in patristic, and especially in Augustinian studies; but not hitherto worked out fully and systematically as Stock has done. And it is worked out in a thoroughly coherent and integrated fashion. Augustine the Reader will quickly become something of a classic, certainly for people seriously interested in Augustine, for it provides an entirely new dimension for understanding his work and, indeed--for the author convincingly presents his life as text--his whole development, spiritual and intellectual.”—R.A. Markus, Professor Emeritus of History, University of Nottingham

“This book offers a fascinating narrative, the story of St. Augustine’s ’moral and spiritual progress through reading,’ beginning with the Confessions and proceeding through other texts. It is masterly, a major scholarly event. The explication de texte of major works, with special attention being paid to reading and related subjects (this being the fundamental method employed) is excellent, highly revealing. There is no study like this, in the thoroughness and acumen with which it works its way through those texts, offering nuanced readings, rich and fascinating details.”—Alastair Minnis, Professor of English, York University

“Stock provides a sustained study of Augustine’s theory of the text and meaning that is applied systematically to the study of Augustine’s own texts...We are given a unique and provocative interpretation of the Saint in Stock’s work, one that will generate much discussion and may even significantly reshape the future of Augustinian studies. Highly recommended.”—The Reader’s Review