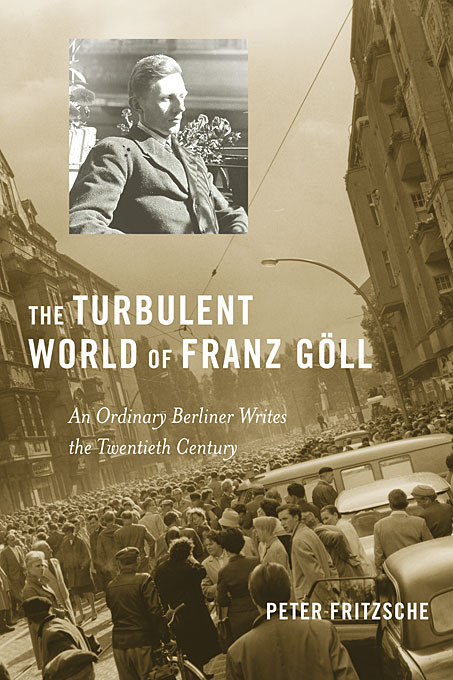 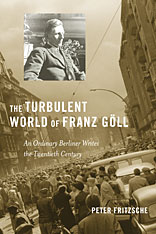 The Turbulent World of Franz Göll

Franz Göll was a thoroughly typical Berliner. He worked as a clerk, sometimes as a postal employee, night watchman, or publisher’s assistant. He enjoyed the movies, ate spice cake, wore a fedora, tamed sparrows, and drank beer or schnapps. He lived his entire life in a two-room apartment in Rote Insel, Berlin’s famous working-class district. What makes Franz Göll different is that he left behind one of the most comprehensive diaries available from the maelstrom of twentieth-century German life. Deftly weaving in Göll’s voice from his diary entries, Peter Fritzsche narrates the quest of an ordinary citizen to make sense of a violent and bewildering century.

Fritzsche paints a deeply affecting portrait of a self-educated man seized by an untamable impulse to record, who stayed put for nearly seventy years as history thundered around him. Determined to compose a “symphony” from the music of everyday life, Göll wrote of hungry winters during World War I, the bombing of Berlin, the rape of his neighbors by Russian soldiers in World War II, and the flexing of U.S. superpower during the Reagan years. In his early entries, Göll grappled with the intellectual shockwaves cast by Darwin, Freud, and Einstein, and later he struggled to engage with the strange lifestyles that marked Germany's transition to a fluid, dynamic, unmistakably modern society.

With expert analysis, Fritzsche shows how one man’s thoughts and desires can give poignant shape to the collective experience of twentieth-century life, registering its manifold shocks and rendering them legible.