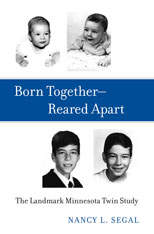 The identical “Jim twins” were raised in separate families and met for the first time at age thirty-nine, only to discover that they both suffered tension headaches, bit their fingernails, smoked Salems, enjoyed woodworking, and vacationed on the same Florida beach. This example of the potential power of genetics captured widespread media attention in 1979 and inspired the Minnesota Study of Twins Reared Apart. This landmark investigation into the nature-nurture debate shook the scientific community by demonstrating, across a number of traits, that twins reared separately are as alike as those raised together.

As a postdoctoral fellow and then as assistant director of the Minnesota Study, Nancy L. Segal provides an eagerly anticipated overview of its scientific contributions and their effect on public consciousness. The study’s evidence of genetic influence on individual differences in traits such as personality (50%) and intelligence (70%) overturned conventional ideas about parenting and teaching. Treating children differently and nurturing their inherent talents suddenly seemed to be a fairer approach than treating them all the same. Findings of genetic influence on physiological characteristics such as cardiac and immunologic function have led to more targeted approaches to disease prevention and treatment. And indications of a stronger genetic influence on male than female homosexuality have furthered debate regarding sexual orientation.