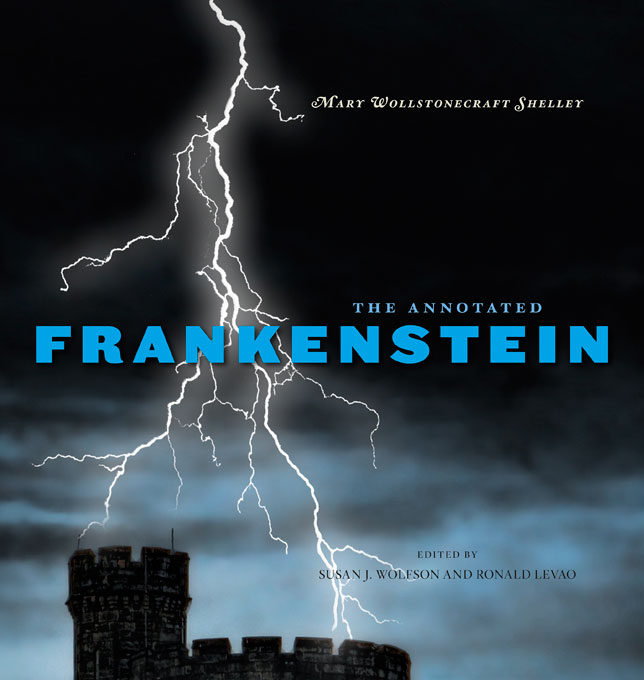 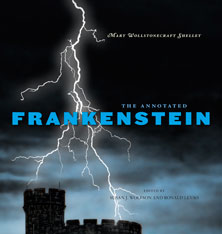 “The Annotated Frankenstein…should appeal to scholars familiar with the novel as well as those exploring it for the first time. The editors, Susan J. Wolfson and Ronald Levao, situate the novel in its philosophical, literary, biographical and historical contexts, and provide apt illustrations and useful appendices (including examinations of the revised edition of 1831 and a timeline which juxtaposes the novel’s episodes with concurrent historical events). Its expansive, cream-coloured pages and generous margins render the volume a world unto itself, while emphasizing the worldly issues Shelley addressed in her uncanny tale.”—Michael Saler, The Times Literary Supplement

“First published in 1818, very possibly the most famous debut novel in English, Mary Shelley’s Frankenstein: Or, The New Prometheus has never been out of print. Far fewer people have read this somewhat difficult and didactic novel than know, or think that they know, who ‘Frankenstein’ was; long ago, the grotesque figure of Dr. Frankenstein’s Monster became detached from its literary context, as from its creator. Highly recommended is The Annotated Frankenstein, edited by Susan J. Wolfson and Ronald Levao, who seem to know, between them, all that there is to know about Frankenstein, including his myriad cinematic metamorphoses over the decades.”—Joyce Carol Oates, The Globe and Mail

“The Annotated Frankenstein, edited by Susan J. Wolfson and Ronald L. Levao, brings scholarship to life for the lay reader. This latest volume in the irresistible ‘annotated’ series from Harvard University Press presents the 1818 edition on oversize, creamy-white pages divided into two columns. While the story runs down the inside columns, helpful commentary runs alongside. Every geographical, biographical and literary allusion is explained; themes are highlighted; and obscure words are defined. A hundred color illustrations sprinkled throughout reproduce manuscript pages, works of art, medical etchings, portraits of Shelley and her friends, and scenes from movie treatments of this deathless tale.”—Ron Charles, The Washington Post

“The Annotated Frankenstein is a well-chosen collection of parts animated by a knowledgeable introduction; beyond that, it is a comprehensive work of breadth, depth, and interest enriched by over one hundred high-quality images. It is a beautiful, amiable companion… The Annotated Frankenstein achieves the editors’ ambitious goals… It offers the pleasures of a gift book while also providing readers with the fruits of decades of scholarship. Images, texts, and annotations together form an edition that is reputable, accurate, and insightful but also something more. Readers can luxuriate in the rich contexts the editors present… In beginning his story, Victor Frankenstein has insisted that intellectual pursuit provides ‘continual food for discovery and wonder.’ The success of The Annotated Frankenstein is that it allows Mary Shelley’s novel to do the same.”—Meoghan Cronin, Essays in Criticism

“Mary Shelley’s classic tale of the doctor who awakened a monster gets an expanded treatment in the edition edited by Wolfson and Levao. This new treatment includes notes on Shelley’s life and highlights literary allusions within the book.”—Molly Driscoll, The Christian Science Monitor

“First published in 1818, Frankenstein, Or, the Modern Prometheus, has fascinated, horrified, alarmed and even enchanted us ever since. In fact, as the editors of this usefully and delightfully annotated and illustrated edition make clear, almost as soon as the book was published, the word ‘Frankenstein’ (so often wrongfully ascribed to the monster and not his creator) became synonymous with anything new, especially disturbing developments in science and technology. This edition will improve greatly one’s understanding of the book’s provenance and its era.”—The Globe and Mail

“This is a serious work of interpretation. Wolfson and Levao offer the most extensively annotated edition of Mary Shelley’s Frankenstein in print, a book that serves the educated but nonspecialist reader.”—J.T. Lynch, Choice

“This new edition of Shelley’s nearly 200-year-old novel is replete with supplements—explanatory notes, scholarly introductions, and other special features—that enhance the text itself. Wolfson and Levao provide useful information on the author’s milieu, including details about her parents, friends, and husband, Percy Bysshe Shelley, focusing on the latter’s contributions to the novel’s birth and development.”—Morris Hounion, Library Journal

“An impressive addition to the study of Frankenstein. While ideal for students of English, this book is accessible enough for anyone desiring a deeper reading of the novel, and does just what a well-annotated work should do, shedding a bright light not only on the text in question, but also on its historical moment and literary forebears.”—Publishers Weekly (starred review)

“Wolfson and Levao revivify the original 1818 version of Shelley’s classic in this illuminating annotated text. Beginning with a thoroughly researched introduction to the author’s life and the ‘life’ of Frankenstein, Wolfson and Levao draw parallels between the novel’s themes and the losses and turmoil that plagued Shelley. Moving along, their commentary draws from an abundance of criticism, focusing primarily on the novel’s allusions to Paradise Lost, Coleridge’s ‘The Rime of the Ancient Mariner,’ and the myth of Prometheus. At a more local level, the duo dutifully notate Shelley’s ingenious use of language and her husband’s edits. This book is accessible enough for anyone desiring a deeper reading of the novel, and does just what a well-annotated work should do, shedding a bright light not only on the text in question, but also on its historical moment and literary forebears.”—Gabe Habash, Publishers Weekly

“This is a superb edition. The annotations provide extensive guidance to the basic themes of the novel, the significance of the names of the characters, the geography of the text, historical dates and allusions, and textual revisions.”—Anne K. Mellor, University of California, Los Angeles

“This is a splendid production, a happy convergence of topic and talent. Frankenstein could easily have been prey to a more sentimental and gossipy treatment; instead what emerges is thorough, spirited, and searching. The net effect is a downright moving portrait of author and novel both.”—Garrett Stewart, University of Iowa