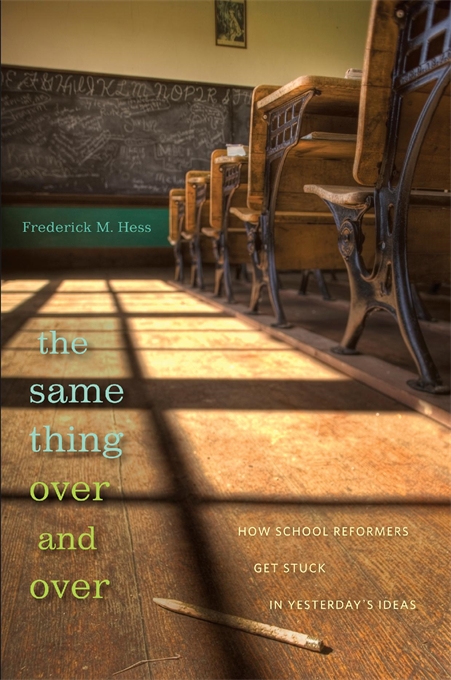 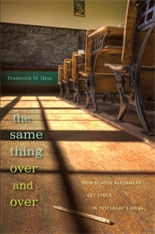 The Same Thing Over and Over

How School Reformers Get Stuck in Yesterday's Ideas

“Frederick M. Hess has written an important book that seeks to bring sobriety to an education-policy realm too often besotted with the panacean, the faddish, the naive, and the antiquated.”—Liam Julian, Commentary

“To say the book is thought provoking is an understatement. Each paragraph entices and envelopes the reader in both the philosophical issues as well as the value issues related to teaching and education… Not knowing about the history of education, and the past philosophies of education will impact our choices and decisions. This book will go a long way in terms of rectifying this situation.”—Michael F. Shaughnessy, Education News

“In this wide-ranging discussion, Hess, an education analyst at the American Enterprise Institute, argues that education reform must be about finding a new path, not just arguing about today’s educational arrangements. He chides educators for failing to look outside the sector for fresh ideas and approaches. Agree or disagree with his remedies, he’s spot on about how frustratingly insular education remains in such a rapidly changing world.”—Andrew J. Rotherham, Time online

“As close as the feverishly productive Hess is ever likely to get to a genuine magnum opus. No one will be shocked that a scholar at [the American Enterprise Institute] has a lot to say that will infuriate liberal defenders of the educational status quo. The book’s real surprise is that he is perfectly willing to take on the sacred doctrines of conservative education reformers, arguing that some of them may actually be hampering the process of educational innovation… Hess is a refreshing change from many other analysts who hold forth on the subject of education. He is unafraid to take on flaws even in policies he largely supports… The most critical lesson from the book is Hess’s powerful theory about what makes schools succeed or fail. That theory, simply put, is that the basic components of schooling—parents, children, school leaders, and teachers—are irreducibly diverse… Rather than aggressively imposing a single set of best practices on all schools, then, Hess argues for narrowing the scope of choices that are made by majorities, and increasing those made by smaller, self-chosen groups of common sentiment.”—Steven M. Teles, Washington Monthly

“Most education books focus on a single aspect of education—pedagogy or school funding—or build an argument around a central theme, such as vouchers or No Child Left Behind. Hess cuts a broader swath, taking a sweeping historical look at the big issues that have shaped education… Hess, an education policy scholar at the American Enterprise Institute, offers an extensive policy primer on the great achievement of American education—and the challenges its success has created.”—Phil Brand, The Washington Times

“Hess takes on virtually every convention of K–12 schooling, including grouping students in age-defined classrooms taught by teachers prepared in traditional schools of education and remunerated in highly standardized ways over long-term careers. He concludes that the current system of K–12 education is wholly inappropriate for the 21st century and argues that the system can probably not be improved to any significant degree by contemporary reforms such as experiments in merit pay, school-based decision-making, and/or mayoral control. Hess is no centrist and has little interest in compromise. Rather, he argues for a transformational reform in which new models replace, not modify, K–12 practices. He supports extended school days only if what occurs in schools radically changes from present practices. He makes a bold but controversial argument that educators need to be honest about the distribution of academic ability. Not all students, he argues, can achieve all subjects at high levels. This is a very-well-done book with rich descriptions of contemporary efforts at school reform and some initial suggestions about the paths toward transformative change.”—S.H. Miner, Choice

“Rick Hess is one of the most provocative people now writing about public education. Sooner or later he challenges everyone’s assumptions. You probably won’t agree with everything he has to say, but this book will surprise you into thinking in completely new ways about what schools could be.”—Richard Barth, CEO and President, KIPP Foundation

“Half the time I’m agreeing with every word Rick Hess says, and wishing I had said it myself. The other half the time I’m provoked, stimulated, and arguing with him. He’s got it both all right and all wrong. Read him, argue with him, take him very seriously.”—Deborah Meier, author of In Schools We Trust