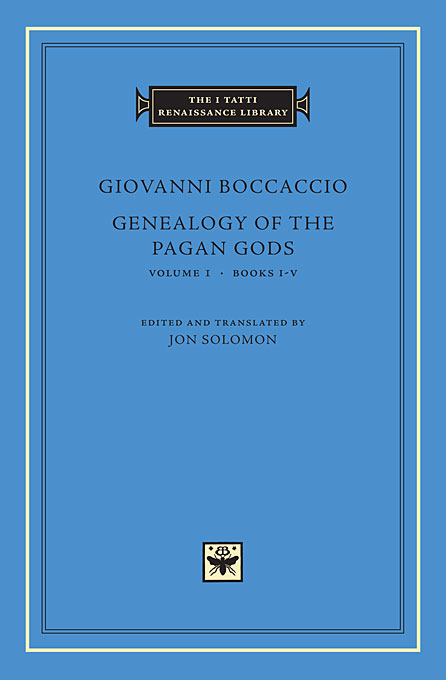 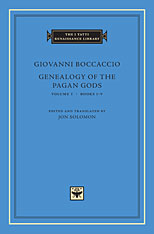 The I Tatti Renaissance Library 46

Genealogy of the Pagan Gods, Volume 1

“A truly stupendous effort in which Boccaccio references hundreds of ancient Greek and Roman sources in over a thousand citations—a stunningly masterful synthesis of all classical mythology, running to over 700 chapters. The whole thing is an utterly amazing performance, a towering masterpiece of Renaissance humanism, and here, as one of the latest entries in Harvard University Press’ I Tatti Renaissance Library, it gets its very first unabridged translation into English. Jon Solomon does the honors, everywhere using a deftly light touch that works perfectly to bring out the relatively straightforward simplicity, sometimes called ‘arid’ by those who go into the work expecting frolics in the Tuscan hills, of the Latin Boccaccio uses in this teeming work… This I Tatti volume is in itself a mighty achievement, and when it’s joined by its companion volumes, all attractively produced and supplied with the extensive critical apparatus most modern readers will need for a work that isn’t entirely accessible, it will stand as a long-overdue monument to its beloved author. And it will give that author’s many fans something new—and wonderful—by him to read.”—Steve Donoghue, Open Letters Monthly