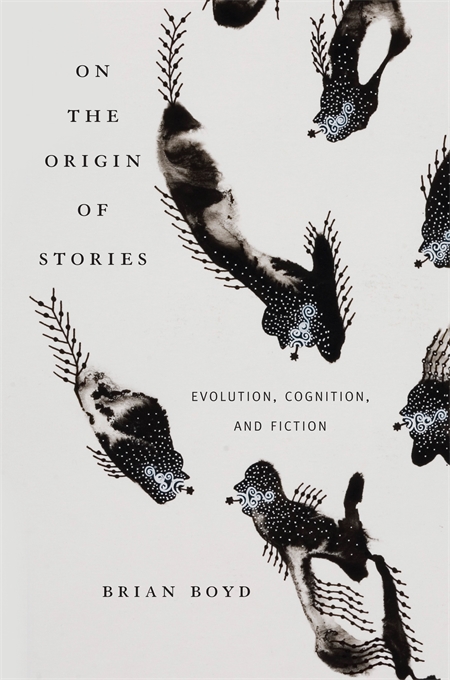 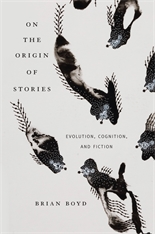 On the Origin of Stories

“On the Origin of Stories may have an impact far beyond academic circles… No one thinks on this scale anymore. Bent to the cultivation of shrinking plots of expertise, enlivened by the occasional boundary squabble, we are ill-accustomed to broad new theories even from Young Turks, let alone established critics. Ambition is in itself cause for celebration… Boyd’s treatment is engrossing, as elegant in the writing as the reasoning. It offers a new insight into the question of why some works [of fiction] speak to audiences across cultures and generations… To look at a story as a naturalist looks at a leaf or a shell, not criticizing improvisations but marveling at its inventive beauty, is a refreshing experience… Whatever your opinion of Derrida, Boyd offers absolution to all lovers of fiction. Our childish taste for make-believe, it seems, is a little more serious than we thought.”—Laura Dietz, The Times Literary Supplement

“Brian Boyd’s On the Origin of Stories, which presents itself as a work of ‘evocriticism,’ might well be a straw in the wind blowing contemporary criticism back from Culture to Nature. Given the rampant culturalism of much current literary work, which can see the natural only as an ideologically insidious ‘naturalizing,’ it is agreeable to read a work which discusses Homer cheek by jowl with allusions to dung beetles, the neocortex and cases of sexual harassment among pigeons. In sober evolutionary spirit, Boyd has no doubt that whatever more glamorous things human beings can get up to, they are in the first place natural material objects. He also insists in the teeth of postmodern orthodoxy that there is indeed a universal human nature; that culture is not unique to the human animal; and that there is a universally identifiable activity known as art. Nobody who is aware of the excesses of contemporary culturalism could doubt the subversive force of these platitudes. The word ‘natural,’ like the words ‘fact’ and ‘truth,’ hardly ever turns up in such writings without being ceremoniously draped in scare quotes—and this in an ecological age. The point to Boyd’s superbly erudite study is to offer an evolutionary theory of art… Brian Boyd has produced a challenging piece of critical theory, which might well herald the return to Nature of which cultural criticism is in such sore need.”—Terry Eagleton, London Review of Books

“[Boyd’s] highly intelligent, impressively learned and patiently elaborated theory of the origin of fiction and the other arts begins with the idea that art is cognitive play… Diffusion of Boyd’s ideas might even, in our utilitarian and scientistic society, restore the prestige of the arts and humanities.”—William Deresiewicz, The Nation

“Like all the best stories, this one has a pleasing symmetry. It is a book in two parts, each illuminating the other. On one side stands evolutionary theory and its attempts to explain human nature. On the other is story itself, represented by two great works of fiction: Homer’s Odyssey and Dr. Seuss’s Horton Hears a Who!… [Boyd] has some novel and thought-provoking ideas, and his book covers an impressively wide terrain… What really matters, Boyd makes clear, is whether a story is worthy of our attention. On the Origin of Stories surely is.”—Kate Douglas, New Scientist

“Boyd’s book will engage and excite readers for decades to come… Reading On the Origins of Stories, I was struck with the same excitement and enthusiasm I can only imagine the readers of Darwin’s text felt in 1859. Boyd’s text is itself a seminal work synthesizing various literary theories upon an evolutionary framework strong enough to hold whatever stance from which the reader comes. Boyd illustrates this by applying evolutionary thinking to the works of Homer and Dr. Seuss alike… This amazing text allows us to see art from new vantage points that may, in fact, ensure its survival within our global culture… Brian Boyd elevates the writing of criticism to an art form by indeed considering the arousal and sustained engagement of his readers. On the Origin of Stories is itself a welcomed mutation in critical writing. Boyd carries his reader along an original odyssey into science, literature, human nature, the epic landscape of Ancient Greece and the tiny world of Whoville. Like Homer and Dr. Seuss, Boyd cares about his readers and wants us to find our way home to the text without sacrificing intellectual integrity and scholarly research.”—Christine Boyko-Head, The Arbuturian

“Brian Boyd brilliantly makes the case for literature as necessary for the survival of humankind. Step by step, he builds his argument that we have evolved to engage in play and, in particular, in storytelling… Both Homer and Dr. Seuss must catch and hold our attention with their artistry, their universality, and their moral tone. Boyd forcefully and elegantly supports his view that art is not simply pleasurable for humans but crucial to our survival.”—Barbara Fisher, The Boston Globe

“Fascinating… Elaborate hypotheses like this one are themselves a kind of story, and Boyd tells his on a grand scale. His central arguments are prefaced by a substantial reprise of basic evolutionary theory—very useful if you’re unfamiliar with it—and followed by two case studies, of Homer’s Odyssey and the tales of Dr. Seuss. It is expert, though highly idiosyncratic, literary criticism… ‘Bliss was it in that dawn to be alive,’ Wordsworth wrote of the first, intoxicating years of the French Revolution. Reading [a] path-breaking book like [this], one feels something similar.”—George Scialabba, The Boston Globe

“A searching, free-wheeling book that sets forth a Darwinian view of narrative’s place in human history.”—Robert Fulford, National Post

“On the Origin of Stories is a fascinating book, even a necessary book. At its best, evocriticism can help to reorient the arts and humanities, renewing (or, in some benighted quarters, sparking) our appreciation for the creative works of human minds and hands, and leading humanists to take a fresh look at the rich evolutionary record.”—Michael Bérubé, New Scientist

“Boyd has created a compelling, erudite, and thoroughly original work about the nature of humanistic expression in art and literature. Beautifully written and wide-ranging, the book delves into social science, evolutionary biology, art, and literature to create a comprehensive account of the evolutionary origins of art and storytelling. The author argues that art derives from play and is a humanistic adaptation, offering advantages for human survival. Storytelling, he contends, fosters cooperation, social cognition, and creativity… Apropos the 150th anniversary of On the Origin of Species, this book is a fitting tribute to Darwin.”—K. Wein, Choice

“Boyd’s understanding of human evolution thus leads him towards those features of literary texts that have always fascinated practical and humanist critics… Boyd alone provides us with a sophisticated literary analysis informed by an equally sophisticated understanding of human biology. Boyd demonstrates comprehensively that evolutionary literary theory is compatible with and can inform perceptive literary criticism.”—John Holmes, The British Society for Literature and Science

“Masterful… [An] entrancing book… [Boyd] clearly invites comparison with Darwin’s masterpiece. Like its namesake, Boyd’s book is carefully constructed and constitutes, in Ernst Mayr’s words, ‘one long argument.’… While a number of evolutionary analyses of literature, fiction, myths, folklore, and art have appeared in the last 15 years or so, this one stands out for its accessibility and genuinely integrative approach, combined with a detailed analysis of two specific fictional works… Boyd covers an astonishing range of evolutionary concepts, human evolution, cognitive and developmental psychology, human ethology, anthropology, game theory and related topics. Having done research in several of these areas, I can attest that he has selected judiciously and described the science remarkably accurately and clearly… Unlike much of the early writings by promoters of simplistic Pleistocene EEA scenarios and typological human universals, Boyd explores detailed empirical observations and experiments, realizes that human variation is the engine of evolutionary change, but—and I view this as an essential strength—eschews a single-minded, or even primary, concern with adaptation… Boyd gets so much right!”—Gordon Burghardt, University of Tennessee, The Evolutionary Review

“Integrating a vast array of findings in the social and biological sciences and in the history of the arts, Boyd makes a compelling case for art as an adaptive human behavior. I can think of no similar work in contemporary literary theory; I have to go back to Northrop Frye’s Anatomy of Criticism for a work of comparable imaginative sweep and analytical precision. A monumental achievement.”—David Bordwell, University of Wisconsin–Madison

“This is an insightful, erudite, and thoroughly original work. Aside from illuminating the human love of fiction, it proves that consilience between the humanities and sciences can enrich both fields of knowledge.”—Steven Pinker, Harvard College Professor, Harvard University, and author of The Stuff of Thought: Language as a Window into Human Nature

“This is a very important book—important in its own right, but also important as a marker for significant change in the academic study of the humanities. Basically, Boyd sees art as an adaptation, one that brings advantages in our struggle for survival and procreative success. He studies the ways in which stories focus attention (as play does) and foster collaboration and unity. This heightened form of play yields a heightened form of sociality, creates ‘creativity,’ refines and extends our cognitive skills, helps us to understand one another’s thoughts, intentions and motives, see our world from multiple perspectives, explore possibilities and not just actualities, command attention, enjoy status and foster reciprocal altruism (among other things). Most interesting, I believe, is the fact that Boyd’s position validates thousands of years of humanistic thought, from Aristotle to Horace, Sidney, Johnson, the Kant of the Critique of Pure Reason (though not perhaps the Kant of the Critique of Judgment) and the successful practice of the storyteller’s art by a host of writers whose work has been not only substantive but widely popular. In short, Boyd’s study of human nature, human behavior, human development and human artistic expression squares with what many of us have long believed and it does so with the leverage of contemporary, evolutionary science.”—Richard B. Schwartz, University of Missouri, Columbia

“Rich, intelligent and incredibly wide-ranging—from Zeus to Seuss, as one chapter title says—this book is indispensable reading for anyone who wants to think about the nature of fiction. Do we imagine that situating art within a theory of evolution must be reductive? Then we must consider, as Boyd suggests we do, the difference between solving a problem and picturing a chance of solving a problem—and imagine what it would be mean not to be able to do the second.”—Michael Wood, Princeton University