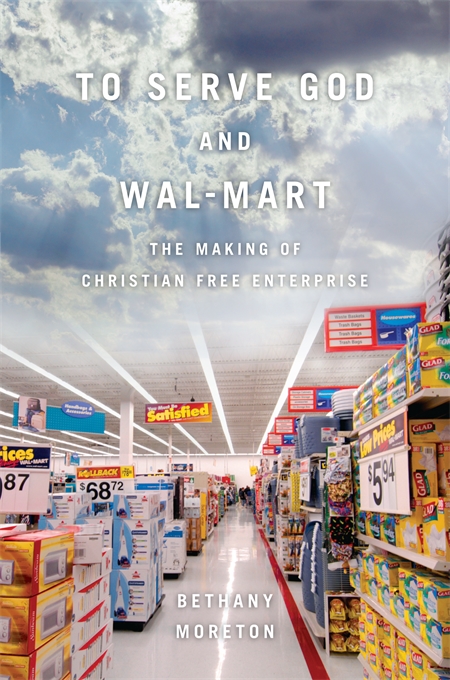 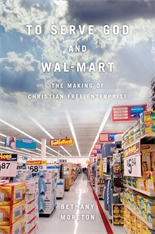 To Serve God and Wal-Mart

The Making of Christian Free Enterprise

“Much of what we learn from Moreton’s book…raises serious doubts about whether the corporation’s influence has been positive on balance. But in the process of describing the downside of Wal-Mart, [she] offers penetrating insights into why the chain has been so phenomenally successful… Moreton offers a gracefully written and meticulously researched account of why people not only have been willing to work for the company, but often have also developed fierce loyalty to it… Economists have long recognized the attractions of flexible working arrangements to some segments of the labor force. But Moreton also offers more novel observations about the lure of Wal-Mart. She explains, for example, how the company invoked the fundamentalist Christian teachings embraced by many of its employees to fashion a working environment that induced them to work contentedly for low wages and paltry benefits… Moreton argues that Walton and his fellow executives quickly recognized the economic advantage of weaving specific strands of the Ozark region’s fundamentalist belief system into their corporate strategy… Moreton’s book answers important questions about why workers have been willing to accept Wal-Mart’s austere compensation package.”—Robert Frank, The New York Times Book Review

“Like all historians who love their craft, Bethany Moreton is a gifted storyteller, and this book offers readers an engaging account of how a discount five-and-dime store conceived in the rural American Ozarks became the template for service work in the global economy… [An] impeccably documented and eloquently argued narrative, which will interest historians, sociologists and general readers… Her most significant contribution is to offer an explanation of the paradox that political pundits have pondered in recent years: why many middle Americans prioritize conservative social issues ahead of government policies that would presumably be in their economic self-interest. Moreton’s careful, sometimes wry historical analysis demonstrates that when ‘values voters’—with many Wal-Mart workers surely among them—eschew economic benefits such as unionization, they do so out of allegiance to a radically new set of moral market priorities. The subjugation of the self to the global corporation, ironically, embraces a deeper set of ideals about the supremacy of family, the morality of self-reliance and the evangelical justification of free enterprise. To Serve God and Wal-Mart shows just how deeply entrenched these ideals are in the world’s largest retailer, offering an intimate portrait of both the contradictions and conquests of the new service economy.”—Rebekah Peeples Massengill, Times Higher Education

“Bethany Moreton’s To Serve God and Wal-Mart: The Making of Christian Free Enterprise views the company as product of its region, showing that its success has depended on a bizarre reconciliation of Northwest Arkansas’s uneasy cocktail of anti-corporate populism, racial homogeneity, evangelical Christianity, and free enterprise… The mega-retailer is significant not only as a business success story but as an ideological triumph for the right. Bethany Moreton charts this triumph brilliantly.”—Liza Featherstone, The Big Money

“This is a history in equal parts of Wal-Mart and the world that Wal-Mart has made… Moreton reveals Wal-Mart’s extraordinary capacity to develop cultural solutions for the very crises that its business model produced. Her prose is extraordinarily lucid and often provocative, and presents the subject in a manner that will hold interest for both scholars and general readers… To Serve God and Wal-Mart should become a standard text in business history courses, and deserves to be widely assigned—in whole or in part—in a broad range of undergraduate and graduate courses on the history of the twentieth-century United States… In performing a deliberate inversion of more conventional approaches to business history, To Serve God and Wal-Mart greatly enriches our understanding of both Wal-Mart and the Sun Belt service economy.”—Angus Burgin, Enterprise and Society

“[A] probing and nuanced study of the latter-day evangelical romance with free-market capitalism… Wal-Mart’s folksy illusion relied in part on making store workers feel like family; in particular, on making female workers feel valued as wives and mothers. Moreton does an excellent job of digging beneath Wal-Mart’s carefully imagineered vision of the rural good life. She not only recounts labor abuses such as the company’s notorious failure to promote and reward women but also stresses how the company appealed to white Americans’ feelings of entitlement… Its workers and the customers they served—often ‘friends, neighbors, and loved ones’—were the same: white Ozarkers nostalgic for a wholesome, more homogeneous, and largely imaginary yesteryear, for a past in which the best opportunities were reserved for people like them.”—Maud Newton, Bookforum

“Moreton charts the fortunes of Wal-Mart, the world’s largest corporation, and analyses its collusion with the evangelical Christian movement. Hers is a thought-provoking general account of the effect ‘a Christian service ethos’ has on American attitudes towards the free market.”—New Statesman

“Bethany Moreton’s pathbreaking study, To Serve God and Wal-Mart: The Making of Christian Free Enterprise is an invaluable asset for apprehending how we got here. Her new book chronicles Wal-Mart’s role in mainstreaming evangelical and free market values even as it became the world’s largest public corporation and the nation’s biggest private employer. A critical appraisal of how religion, politics and economics were interwoven in post-Vietnam American culture and society, To Serve God and Wal-Mart is also a bracing reminder that we, among the most materialistic people in the world, have turned a blind eye to the impact of material conditions on our actions, attitudes and beliefs.”—Diane Winston, Religion Dispatches

“Walton made the cheerful, down-home, everyone-pulling-together family-farm values of his early frontline retail workers a hallmark of his emerging behemoth while earning their loyalty through policies, like flexible scheduling, that respected their ‘home duties.’… To understand the lingua franca of today’s workplace—with its talk of networking, entrepreneurialism, leadership, community service, and, above all, PR and communications—this book is indispensable reading. After all, we all live in Wal-Mart World now.”—Catherine Tumber, The Boston Phoenix

“Moreton provides both a bird’s eye view of the corporation’s history and the in-store perspective of a great many interviewed employees. Her wide-lensed analysis includes in its focus aspects as divergent as the sleepy Ozarks of the early 20th century, the turbulent Latin America of the late 20th century and the network of conservative free market fundamentalists who dutifully prepared the way for Wal-Mart’s meteoric rise… To Serve God and Wal-Mart can be seen as a case study, a scrutiny of the all-too-familiar larger phenomenon, that strange conflation of metaphysics and economics, where the Dow Jones average moves in mysterious increments according to unknown and unknowable vagaries, and the individual is sacrificed on the altar of corporate profit. Is this how a merciful God distributes His favor? Or could it be that religion is being used in that old familiar way, to legitimize exploitation otherwise abhorrent?”—Matthew Pulver, Flagpole

“Essential reading for understanding not just Wal-Mart, but also America’s general political and economic trajectory.”—David Moberg, In These Times

“Full of detailed and important information and gives a very good insight as to how the sunbelt states set about their development after the second World War… For those interested in the Southern Christian psyche it’s a valuable reference.”—Noel Smyth, The Irish Times

“Why are the people who are harmed the most by big business conservatism often the same people who are its most vociferous supporters? Bethany Moreton seeks to answer that question in her fascinating book, To Serve God and Wal-Mart. Not just some mainstream, shallow outsider’s screed against rural American culture and politics, Moreton’s book instead is an academic exploration of the social, political and religious upheaval in the post-WWII South that transformed blue-collar Democratic-voting white farmers into the religiously conservative suburban base behind Reagan-era corporate expansion… It’d be a mistake to discount Moreton’s book because of political prejudice. Her work isn’t a denunciation of rural rubes, but is instead a story of an energetic and creative people adapting to economic crises. The impulse to community that drives the success of Wal-Mart is no sin, but the exploitation of this impulse by corporations like Wal-Mart is damnable.”—Jay Stevens, The Missoula Independent

“[A] deeply researched account of the ideological underpinnings of the company’s rise… [It] makes for compelling and provocative reading, complicating any simplistic view about why many Americans are enthusiastic about Wal-Mart, even as it seems to grind down wages, stamp out unions, advance a desolate model of exurban life, and eviscerate the small towns in its path.”—Rob Horning, PopMatters

“Moreton unearths the roots of the seeming anomaly of ‘corporate populism,’ in a timely and penetrating analysis that situates the rise of Wal-Mart in a postwar confluence of forces, from federal redistribution of capital favoring the rural South and West to the ‘family values’ symbolized by Sam Walton’s largely white, rural, female workforce (the basis of a new economic and ideological niche), the New Christian Right’s powerful probusiness and countercultural movement of the 1970s and ’80s and its harnessing of electoral power. Giving Max Weber’s ‘Protestant ethic’ something of a late-20th-century update, Moreton shows how this confluence wedded Christianity to the free market. Moreton’s erudition and clear prose elucidate much in the area of recent labor and political history, while capturing the centrality of movement cultures in the evolving face of American populism.”—Publishers Weekly

“Fascinating… With verve and clarity, Moreton offers something more distinctive: a compelling explanation of how Wal-Mart captured the hearts and pocketbooks of so many Americans.”—Steven P. Miller, The St. Louis Post-Dispatch

“To Serve God and Wal-Mart is a landmark study. Moreton’s subtle blend of economic and cultural history compels us to rethink the history and geography of modern America. Revelations abound on every page.”—Jean-Christophe Agnew, Yale University

“A fascinating portrait of the interconnections of commerce, spirituality, and government in modern society. Moreton treats Wal-Mart as a great whale of a corporation that gathered religious and political significance as it traveled from Bentonville, Arkansas, throughout the US, on to Mexico, and to every corner of the globe.”—Walter A. Friedman, Harvard Business School

“This brilliant book could well become one of the most talked about nonfiction books of 2009—certainly among those who helped bring in the Obama era and likely among their opponents as well.”—Nancy MacLean, author of Freedom Is Not Enough: The Opening of the American Workplace