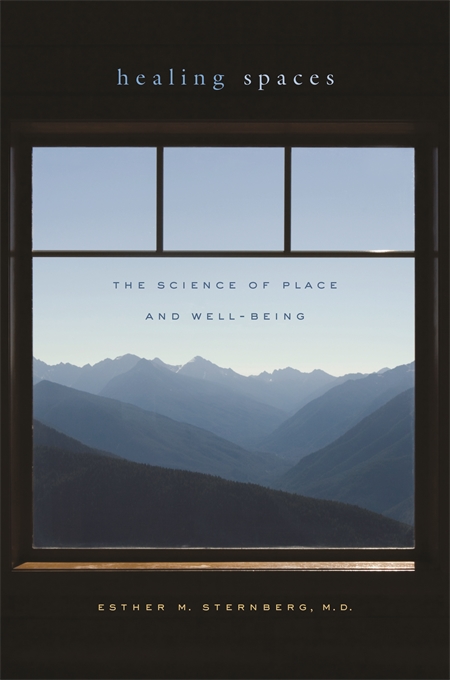 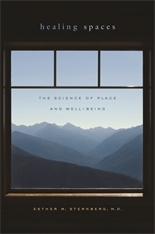 The Science of Place and Well-Being

“Healing Spaces [is] an exploration of environmental influences over the brain, the body and the course of mental and physical disease… Anyone who has ever felt peace descend in lovely surroundings will find a few seeds of explanation in her book.”—Abigail Zuger, M.D., New York Times

“In this fascinating book, physician Esther M. Sternberg explores the intersection of architecture and medicine; the studies and conferences (primarily through the Academy of Neuroscience for Architecture) and vast body of literature that reveals the extent to which our external environment plays a role in healing… Sternberg’s findings are fascinating, some strange, some pure common sense—thought-provoking for both individuals and institutions.”—Susan Salter Reynolds, Los Angeles Times

“After this fascinating, engaging, and challenging read I’ll think about the heath consequences of where I am in a different way.”—Richard Mitchell, The Lancet

“What Sternberg does so skillfully is to stitch together an explanation as to how so many of the things we intuitively find relaxing, like yoga, or sitting by the sea, or in a bright airy room, affect how quickly we heal. She provides the science to back it up and explains it so engagingly that it’s hard to resist sharing her conviction.”—Linda Geddes, New Scientist

“Sternberg offers a fascinating study of the complex relationships between health and ‘healing places.’ …She makes the work of many pioneers in brain and behavioral research accessible to laypersons even as they rub elbows with such figures as Walt Disney, Frank Gehry, and the Dalai Lama… This is a fine, thoughtful volume.”—J. Quinan, Choice

“Even the ancients understood that some places had healing powers. But in the late 20th century, scientists began to study how space affects both mental and physical health for good and ill. NIH researcher Sternberg thoroughly chronicles research on the neural pathways that connect our sensory perception of our environment with our ability to heal… The conclusions—e.g., that noise induces stress, which can impede healing—seem intuitive and well known, but readers interested in neuroscience will learn much about the research on why this is the case.”—Publishers Weekly

“Most of us explain what other people do in terms of their individual abilities, motives, and personality traits, even when their behavior is due primarily to situational forces. This important and beautifully written book shows that contemporary medicine has made the same fundamental error about healing, and shows how powerful situations and spaces can be in moving people from illness to health.”—John Cacioppo, author of Loneliness: Human Nature and the Need for Social Connection

“A vividly written book about a humanly important issue: the ways in which the spaces we literally inhabit—whether they be hospital rooms or spacious outdoor vistas—are not just backdrops to our dramas of health and illness, but actually have an impact on the outcomes of those dramas. Mixing accessible science with elegant ‘you are there’ journeys of exploration, Sternberg has written a book that pushes the boundary of mind-body science in ways that patients and their caregivers alike will appreciate.”—Anne Harrington, author of The Cure Within: A History of Mind–Body Medicine

“This engaging book—conversational in tone, informative in content—is full of insight on collective healing and well-being. Esther Sternberg reveals the power of both natural places and architecture to elevate and enrich human experience and health. Enjoy it, and benefit from reading it!”—Norman L. Koonce, former CEO, American Institute of Architects

“Esther Sternberg is a rare writer—a physician who healed herself by going back to ancient truths known by the Greeks, and proving them. With her scientific expertise and crystal clear prose, she illuminates how intimately the brain and the immune system talk to each other, and how we can use place and space, sunlight and music, to reboot our brains and move from illness to health.”—Gail Sheehy, author of Passages