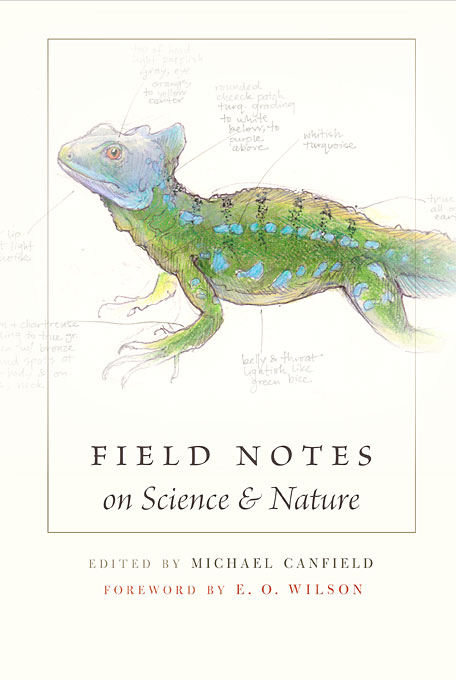 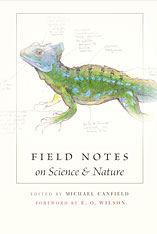 “[This] exceptional collection of essays, Field Notes on Science and Nature, offers practical tips for the born-again naturalist, who, after all, is useless without a notebook. Here biologists, geologists, anthropologists and scientific illustrators open notebooks from all stages of their lives, showing how they record and organize their observations. Some sketch, others paint, some combine graphs and cryptic scrawl making a glorious mess. The point is that their observations don’t go unrecorded and that many seemingly random notations, made during routine or aimless forays, have led to important discoveries.”—Jennie Erin Smith, Wall Street Journal

“This gorgeous book reproduces samples from the notebooks of 12 naturalists in all their glory, accompanied by short essays on methodology and why field notes are still so critical to the art of science… These drawings, notes (in spectacular handwriting), photos and maps are a reminder that natural history is the root of all biology, and observation is a critical skill. George Schaller’s drawings of a lion hunt in the Serengeti, Bernd Heinrich’s delicate drawings of leaves, Kenn Kaufman’s lists, Jonathan Kingdon’s drawings of acacia trees in Kenya, Jenny Keller’s spectacular drawings of moon jellies—these and others make science look not only appealing, fascinating and fun but human and creative as well.”—Susan Salter Reynolds, Los Angeles Times

“Pioneering a new niche in the study of plants and animals in their native habitat, Field Notes on Science and Nature allows readers to peer over the shoulders and into the notebooks of a dozen eminent field workers, to study firsthand their observational methods, materials, and fleeting impressions… Recording observations in the field is an indispensable scientific skill, but researchers are not generally willing to share their personal records with others. Here, for the first time, are reproductions of actual pages from notebooks. And in essays abounding with fascinating anecdotes, the authors reflect on the contexts in which the notes were taken. Covering disciplines as diverse as ornithology, entomology, ecology, paleontology, anthropology, botany, and animal behavior, Field Notes offers specific examples that professional naturalists can emulate to fine-tune their own field methods, along with practical advice that amateur naturalists and students can use to document their adventures.”—Ian Paulsen, The Guardian

“Field Notes on Science & Nature is an eclectic collection that crosses many disciplines, from geology, botany and zoology to art and anthropology. The variety of styles and records described are fascinating—field notes are very personal. Some of the contributors take notes entirely electronically, others in red pen in cheap notebooks. Others use pictures more than words. Few of us have the artistic skills of Jonathan Kingdon or Jenny Keller, scientist-illustrators whose drawings alone make this book worth buying. But even the sketchiest sketch can call to mind a place or organism in a way no words can… I will alter my own note-taking after reading this set of essays. All scientists, whether based in the field or the lab, could benefit from the advice given here so eloquently.”—Sandra Knapp, Nature

“Michael Canfield’s Field Notes on Science and Nature raises the curtain on where ‘science happens,’ allowing readers behind-the-scenes glimpses of the rough-draft places from which serious inquiry springs… This book of meditative essays is interspersed with lush facsimiles of just such notebooks, often accompanied by sketches of butterflies, charts of soil strata, or memories of weather and light. In the era of the laptop and iPhone, readers can see what the Moleskine can still accomplish as a place for thought to assemble, and observe how the act of careful recording can give rise to great and meaningful discovery. Ranging from etymologists to paleontologists to avian specialists, the essayists gathered in this collection share a common love of watching and writing, and a keen ability to articulate how both of these things form the first tier of human investigation. Whether we’re learning the way a passing thought about crane flies became a discovery of the way a species protects itself, or hearing about an expert who developed his own finely honed philosophy of list-making, or reading how journal entries about raven behavior led to a book, we’re gifted with an understanding of how note-taking becomes the first place to frame a world… Looking at these well-kept journals is like looking into an artist’s sketchpad, a journalist’s reporting notes, or a composer’s first drafts. We see the activity of a mind sorting out the world and framing it… Out of these drafts some essence reveals itself—and to each of these scientists this process still has the luster of mystery. At its base this book is about science, but it’s also about the liveliness of the human mind practicing any craft, and about the kinetic, surprising places from which any human knowledge springs.”—Tess Taylor, Barnes & Noble Review

“Michael Canfield’s extraordinary new book, Field Notes on Science and Nature, takes us back to a time when the notebook was a serious scientific tool: when paper-and-pencil field notebooks were ‘the most basic tool for studying the science of nature.’ Field Notes, by beautifully reproducing dozens of pages from field notebooks old and new, reveals the important role note-taking has played, and still plays, in scientific reasoning.”—Josh Rothman, Boston Globe online

“This remarkable book features 14 essays written by accomplished natural scientists about scientific note-taking in the field, lavishly illustrated with examples from their field notebooks and journals… Most of the authors acknowledge the value of technology, but prefer writing in their field books. I find it refreshing that these distinguished scientists consider the humble pen and notebook their most important tools… Field Notes on Science and Nature may turn out to be inspiration for a new generation exploring our natural world.”—Harvey Webster, Cleveland Plain Dealer

“Flip through the pages of a biologist’s notes and you may find sketches of plants and animals, hand-drawn maps, and the author’s occasional excited exclamation or question to himself. It can be like getting an opportunity to hear someone think out loud. Field Notes on Science & Nature gives readers a chance to do some eavesdropping of their own by providing a glimpse into a few of these notebooks.”—Alyson Foster, National Geographic online

“This compendium comprises essays written by renowned scientists like mammalogists George Schaller and Jonathan Kingdon, and plant biologist James L. Reveal. Based on their own journals, and replete with illustrations lifted straight from their field notes, the essays not only provide an insight into the minds of world-class researchers but also address broader questions about the function and meaning of the field journal… While the solid observations have indeed gone on to be used in peer-reviewed publications, the more Darwinesque-style human stories make for the most enjoyable parts of the book. These stories show the delightful humanity behind the scientific studies… The contributors’ enthusiasm and informed guidance will ring true with anyone who has spent time in the field. Although few will have the dubious privilege of having their every scribbling archived, valuable lessons are there for everyone armed with a pen and paper. In fact, the vivacity of the essays will inspire many to pick up a pencil and venture into the wild. I for one am left itching to get back to the bush to put what I’ve read here into practice.”—Jack Ashby, New Scientist

“It’s hard to believe that only two of the fourteen scientists who contributed chapters to Field Notes on Science & Nature, a study of the lasting importance of the scientist’s field journal, are formal illustrators… It was the book’s graceful design and beautiful illustrations that first grabbed my attention. The sketches and watercolors made by scientists in real time are charming and instructive, capturing unsuspected nuances of the world around us… A scientist’s field journal is an intimate thing, rarely shared with outsiders. But the contributors to Field Notes on Science & Nature have a purpose: to demonstrate the importance of the field journal in scientific study for younger generations of researchers, who receive less and less formal instruction in their graduate work in keeping and maintaining field notes… What comes across most in Field Notes is how the creativity and care involved in making notes aids in thinking about problems and theories in new ways.”—Stacey Mickelbart, New Yorker blog

“Right from the start, the book induces a rewardingly sublime aesthetic response… Anyone who cares about the environment would likely profit from reading Field Notes on Science and Nature, and I hope graduate professors will require it as background for qualifying exams.”—Harry W. Greene, Science

“Why are scientists’ field notebooks so valuable? And do notes really matter anymore, with global positioning systems, laptops and digital cameras available to document information traditionally recorded through sketches and barely legible scrawl? In Field Notes on Science and Nature, edited by Michael R. Canfield, more than a dozen biologists, anthropologists, geologists and illustrators explore these questions as they open up and dissect their journals, and a few of their forebears’ as well… Both [Bernd] Heinrich and [Roger] Kitching started with little besides notebooks; both have enjoyed rich scientific careers. This should be heartening news to any young person heading outdoors with some pencils, a notebook, a collecting jar or two and no ideas whatsoever.”—Jennie Erin Smith, Wall Street Journal

“There is no other book like this—one that takes readers out of the laboratory and into the field to learn the basics of natural history and the fun of observing nature.”—George Schaller