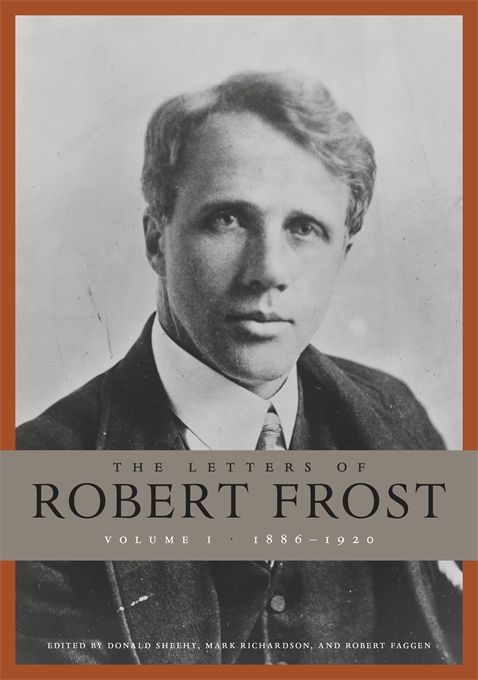 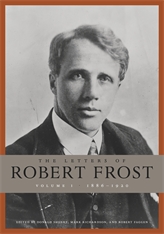 The Letters of Robert Frost, Volume 1

“This opening volume of a complete edition of Frost’s letters meanders from a schoolboy’s love notes (‘I have got read a composition after recess and I hate to offaly’) to the dashed valedictions of the poet at 45, fleeing a cushy job at Amherst. Generously annotated, it replaces the selected letters edited by Lawrance Thompson half a century ago… In almost every way, this new edition is a triumph of scholarly care… The notes are as thorough as most readers could wish… For all his private flaws, his tragedies large and small, American literature—and the language itself—owes a profound debt to that dark, demonic, beguiling figure, Robert Frost.”—William Logan, The New York Times Book Review

“It can sometimes seem, from the surfeit of images of Frost in his later years, that he was born old, incapable of youth in the same way John Keats is incapable of age. The Letters of Robert Frost, Volume 1: 1886–1920, edited by Donald Sheehy, Mark Richardson, and Robert Faggen, part of a heroic effort by Harvard University Press to collect all Frost’s writings in a definitive edition, goes some way toward filling this imaginative deficit… These letters [show] Frost at home in metaphor, if nowhere else… His own oppositional modernism was as revolutionary as Eliot’s.”—Dan Chiasson, The New Yorker

“It must be said that these early letters carry the burden of [Frost’s] poetry so finely as to be no embarrassment to the poetry. The book has been edited by Donald Sheehy, Mark Richardson and Robert Faggen with continuous tact and sensitivity to the likely demands of a literate reader; there are enough notes and just enough (they never strike one as intrusions pretending to be elucidations). A good index and a biographical glossary complete the authority of a book that has been printed with the care and elegance it deserves. Frost’s letters seem the inevitable expressions of a personality, so that, even when a mask is on, there is interest to be found in exactly what it reveals.”—David Bromwich, The Times Literary Supplement

“Long overdue, The Letters of Robert Frost, Volume 1: 1886–1920 is deservedly getting a lot of attention. Frost is not simply a lively correspondent, he is an artist of the epistolary form, defining himself and his poetic era in these pages. The trio of editors, Donald Sheehy, Mark Richardson, and Robert Faggen, have done a splendid job, bringing into print all of the known letters from this period, silently correcting obvious typos, offering helpful annotations in ample headnotes and footnotes… The truly original, splenetic, aphoristic, and revisionary mind of a major poet comes into view… No reader will come away from this volume without a quickened sense of the poet’s greatness in the face of his obvious failings as a human being. His unique, almost ferocious, intelligence shines on every page of these letters.”—Jay Parini, The Chronicle of Higher Education

“[A] superb first volume of the Letters (two more are on the way)… The letters have less to say about the events in the poet’s life than about the life of his writing, although at several points the unspoken pressure of the life that informs the writing makes itself felt. The whole volume reveals a lot about the way Frost’s imagination works—and his desperation to make it work… Frost’s letters are vital documents not simply because they throw more light on his work, but because they throw more darkness on it.”—Matthew Bevis, London Review of Books

“Such a joy to read… This is the first time a complete version of [Frost’s letters]—running in chronological order—has been made available. Frost saw these noble exchanges almost like an art form: one where he could deconstruct his own work, and the work of others, with precision and intellectual rigor… Through them, we get a deep insight into Frost’s views on: the mechanics of poetry; politics; the art of conversation; and the importance of structure and syntax in language… These letters give us greater insight into Frost the poet, and Frost the man, and they are a fitting testament to his exceptional work ethic as a writer. Anyone interested in the laborious process an artist must undertake to perfect his craft will read this book with awe and fascination, and as a constant source of inspiration.”—J. P. O’Malley, NPR Books

“The Letters of Robert Frost, Volume 1: 1886–1920 is a staggering effort by the three editors—Donald Sheehy, Mark Richardson and Robert Faggen—and Harvard University Press to present, for the first time, the entire collection of all of Frost’s preserved correspondence. What’s unique about this effort is that there’s no discernible bias made by the editors; instead, their expectation, as suggested in the preface, is that unlike prior biographies and incomplete collections of correspondence, ‘the availability of the correspondence in its entirety will present both an occasion and a means to come to know Robert Frost anew.’ [It’s] a collection so massive that casual readers may look at its fatty binding and flee in terror with memories of being forced to read Boswell’s Life of Johnson, Joyce’s Ulysses or Wallace’s Infinite Jest. But those people would be mistaken; while visibly daunting, The Letters of Robert Frost should be read by everyone.”—Shyam K. Sriram, PopMatters

“Overall, the letters show Frost to be a mature artist, a good friend, and a caring husband and father… The introduction, chronology, index of correspondents, and helpful contextual notes make these letters both accessible and enjoyable for anyone interested in Frost. How could it be otherwise for a poet who always wrote for the many and the few?”—Micah Mattix, The Weekly Standard

“The Frost who emerges from his letters can come across as vain, defensive, ingratiating, stubborn… But what redeems Frost is his acute awareness of his own deficiencies of character—along with his lively sense of humor. Like his poems, his letters can be playful and teasing. Others read like drafts of lectures, in which he tries out his ideas about poetry. They take us back to an era when letter-writing was the next best thing to a conversation beside the fireplace. Frost meant his letters to do what Horace said poetry should do—please and instruct their readers. Thanks to the labors of Donald Sheehy, Mark Richardson, and Robert Faggen, they can now please and instruct us as well, even though we don’t write letters anymore.”—Mark Walhout, Books & Culture

“To remove some of the confusion surrounding Frost himself is among the editors’ aims in this first of four planned volumes of his complete letters. It continues the commendable project by Harvard University Press of bringing into print all the primary material of one of America’s most important 20th-century poets… Judging by this first volume, which takes us up to Frost at age 46 (he was born in 1874), he comes across very well: sympathetic, funny, self-deprecating, and both loyal and caring towards family and friends.”—Simon West, The Australian

“Writers, in particular, are revealed through traditional correspondence. Thanks to Harvard’s undertaking, Frost’s more complete, chronological letters help correct the poet’s legacy by allowing it weight and breadth.”—Valerie Duff, The Boston Globe

“The Letters of Robert Frost [is] a projected four-volume edition of all the poet’s known correspondence that promises to offer the most rounded, complete portrait to date… The complete correspondence, scholars say, will show Frost in full, revealing a complex man who juggled uncommon fame with an uncommonly difficult private life (including four children who died before him, one a suicide), a canny self-fashioner who may have cultivated the image of a birch-swinging rustic but was as much the modernist innovator as T. S. Eliot and Ezra Pound… If there’s a true revelation in the first volume, the editors say, it’s the sheer intellectual firepower Frost brings even to a casual missive, the range of references that can wind playfully from George Bernard Shaw to Gothic architecture to Neolithic archaeology, all in a few hundred words.”—Jennifer Schuessler, The New York Times

“The Frost of the letters is deeply literary, a theorist of prosody, a scholar of Greek and Latin… Frost’s erudite, wide-referencing letters…revel in multi-level puns and literary riddles as much as anything in Joyce…That so many perfect poems arose from what his letters testify was an imperfect life isn’t duplicity; it’s grace.”—Michael Lista, National Post

“The collected Letters reviewed here should serve as a thorough corrective to [biographer Lawrence] Thompson’s view of Frost as a ‘monster’ and a parallel tendency to dismiss him as a poet of seemingly easy favorites like ‘The Road Not Taken.’ The letters call for a renewed evaluation of Frost as a poet who drew skillfully, and with playful subtlety, on classic poetic themes and subjects to give them a modern relevance… [An] excellent and meticulously edited volume.”—Andrew Hamilton, New Criterion

“The first volume [of letters] is already enough to prove, if proof were needed, that Frost was anything but the shit-kicking fireside verse-whittier of legend. When not actually practicing his art, he thought about it so long and hard that it was a wonder he had time for anything else. His detractors would like to think that he found plenty of time to suborn editors, sabotage rival poets and practice infinite cruelties on his wife and family, but even his detractors must have noticed that he got quite a lot of meticulously crafted poems written. These letters are proof that his working methods and principles were the product of a mental preoccupation that began very early. Right from the start he had an idea of what a poem should do… Whatever else they reveal about him—perhaps he stole cars—the next two volumes of letters are bound to go on showing that he was as thoughtful and hard-working as an artist can get: further evidence that the best of modernism is a way for the classical to keep going.”—Clive James, Prospect

“Robert Frost, it seems, didn’t just craft some of the best poetry in the English language, he wrote a lot of letters, too: 3,000 and counting. While many have appeared in prior collections, nothing matches the size and scope of this project.” —Mackenzie Carpenter, The Pittsburgh Post-Gazette

“Frost shows himself to be playful, sly, caring and supremely serious about his art in his letters to poets Amy Lowell, Louis Untermeyer, Edward Arlington Robinson and Harriet Monroe; publishers Alfred Knopf and Henry Holt; former students; his daughter; and many friends… Judiciously annotated with a biographical glossary of correspondents and an indispensable chronology, this volume may well inspire a Frost renaissance.”—Kirkus Reviews

“Not the rustic sage, but the savvy, ambitious, cosmopolitan poet emerges from this first volume of Frost’s lively, shrewd letters… The editors’ exhaustive, well-organized notes and appendices, explicating every obscure figure and stray allusion, make the collection a must for scholars; but Frost’s witty, urbane style make the letters an engaging browse for ordinary readers, too.”—Publishers Weekly

“After decades in which Robert Frost’s letters were unavailable, we are given the first of several volumes, taking him up through 1920. Especially valuable are letters from 1913–14 in which Frost staked out his poetic aims and principles. The editorial job is painstakingly, indeed brilliantly, performed.”—William H. Pritchard, Amherst College