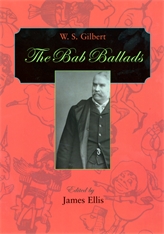 W. S. Gilbert, renowned author of the Savoy Operas, was also the creator of the Bab Ballads—“possibly the best comic verse—and surely the best illustrated—in the English language,” according to James Ellis. Gilbert published these poems, together with his own, grotesque drawings signed “Bab,” a childhood nickname, in Fun and other magazines in the late nineteenth century.

In 1898, the older and by then distinguished Gilbert substituted pallid and inoffensive drawings for the originals, which he had come to believe “erred gravely in the direction of unnecessary extravagance.” Since then the ballads have been collected and published in various editions, most of which have featured the revised drawings and only a selection of the poems.

This is the only book to offer the complete collection of ballads with all original illustrations, a tribute to the comic genius of a writer known as “the most original dramatist of his generation.” This collection will delight readers with its irreverence and wit.