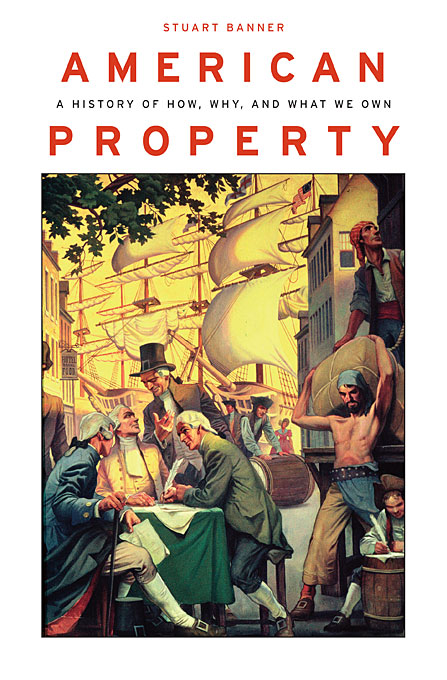 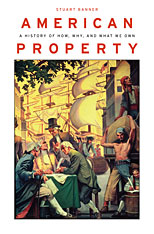 A History of How, Why, and What We Own

“Ostensibly a history of the ways judges and other legal actors have argued about what constitutes ‘property,’ [American Property] offers a generally persuasive and always accessible reconstruction of how particular claimed resources—waterpower at one moment, copyright at another, clean air, the airwaves, access to beaches, the capacity of suburbanites to sustain a homogeneous racial community at others—have become and remain contested in the law. Unlike most historians of property, who usually pick a single critical standpoint or truth about who owns what in America (natural right, inequality, exploitation, beggaring the environment), or who track particular phrases or positions as they have been mobilized throughout American history, Banner builds a portrait of property in the United States by exploring transitory conflicts and settlements… American Property is not just a revelation of the secret knowledge of American property law but a chronicle of how that knowledge was amassed, told through a sequence of exemplary tales and moments.”—Hendrik Hartog, The Nation

“What sounds like it might be a staid look at a dry subject turns out, in fact, to be an exciting and captivating journey along a fascinating side road in American history: property and its ownership… [Banner] explores the occasionally labyrinthine legal and political processes that, as America was defining itself as a country, began to define one of its residents’ most basic (yet complex) rights.”—David Pitt, Booklist

“Banner provides an expansive survey on the evolution of property rights and protections in the U.S. Using the background of technological advances and shifting social perspectives, the author highlights the mutable nature of American property.”—A. H. Cooley, Choice

“In this tightly written book, Banner tackles an admittedly expansive topic, illustrating that our ideas about what property is, how it is regulated, and what it is meant to do are in constant flux and have been historically contested. Partly an examination of law, partly of culture, politics, economics, and even religion, Banner successfully shows how our notions of property and so-called ‘natural property’ in essence sketch the shifting borders of what Americans deem appropriate government regulation. ‘Our conceptions of property have always been molded to serve our particular purposes,’ Banner writes, using examples ranging from zoning laws (which were often used to enforce racial and economic boundaries); eminent domain and personal property disputes; as well as new, thorny notions of intellectual property in the digital age (digital copying makes some property rights harder to enforce, he notes, but creates new opportunities as well). Banner even addresses biological breakthroughs (can a company own a genetically engineered hybrid or a cell line?).”—Publishers Weekly

“We have never had a comprehensive synthesis of the history of property and property law in the United States. Now Stuart Banner fills this major gap with an original and insightful work.”—Gregory S. Alexander, Cornell University

“In this masterful survey, Stuart Banner documents the evolution of property rights. Brimming with fresh vignettes and insights, American Property will enlighten and delight both general readers and specialists in these issues.”—Robert Ellickson, Yale Law School

“American Property deftly explores the many ways that we rely on property to achieve human ends, tailoring the law to suit new places and changing technology.”—Sarah Barringer Gordon, author of The Spirit of the Law

“Stuart Banner’s elegantly written tour of American property law leads its reader to a startling conclusion. There is no such thing as a unified singular law of property. There are only laws of property that have shaped where we live, the news we read, the inventions we use, the celebrities we watch, and the music we listen to. Our ideas of property won’t ever look quite the same.”—John Fabian Witt, author of Patriots and Cosmopolitans: Hidden Histories of American Law