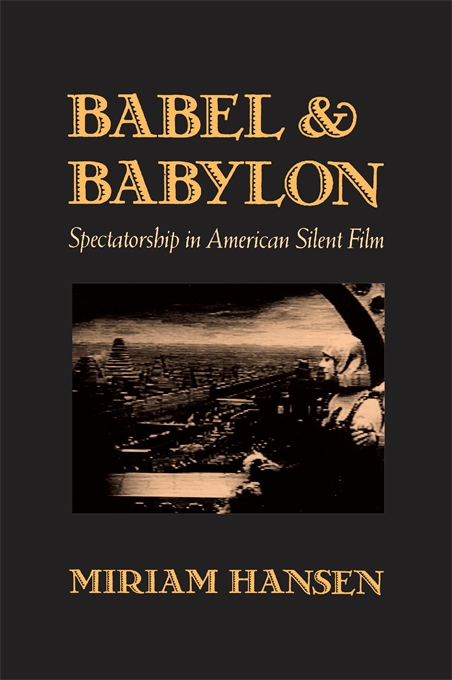 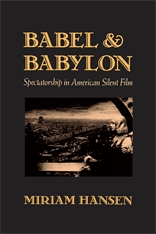 Although cinema was invented in the mid-1890s, it was a decade more before the concept of a “film spectator” emerged. As the cinema began to separate itself from the commercial entertainments in whose context films initially had been shown—vaudeville, dime museums, fairgrounds—a particular concept of its spectator was developed on the level of film style, as a means of predicting the reception of films on a mass scale. In Babel and Babylon, Miriam Hansen offers an original perspective on American film by tying the emergence of spectatorship to the historical transformation of the public sphere.

Hansen builds a critical framework for understanding the cultural formation of spectatorship, drawing on the Frankfurt School’s debates on mass culture and the public sphere. Focusing on exemplary moments in the American silent era, she explains how the concept of the spectator evolved as a crucial part of the classical Hollywood paradigm—as one of the new industry’s strategies to integrate ethnically, socially, and sexually differentiated audiences into a modern culture of consumption. In this process, Hansen argues, the cinema might also have provided the conditions of an alternative public sphere for particular social groups, such as recent immigrants and women, by furnishing an intersubjective context in which they could recognize fragments of their own experience.

After tracing the emergence of spectatorship as an institution, Hansen pursues the question of reception through detailed readings of a single film, D. W. Griffith’s Intolerance (1916), and of the cult surrounding a single star, Rudolph Valentino. In each case the classical construction of spectatorship is complicated by factors of gender and sexuality, crystallizing around the fear and desire of the female consumer.

Babel and Babylon recasts the debate on early American cinema—and by implication on American film as a whole. It is a model study in the field of cinema studies, mediating the concerns of recent film theory with those of recent film history.