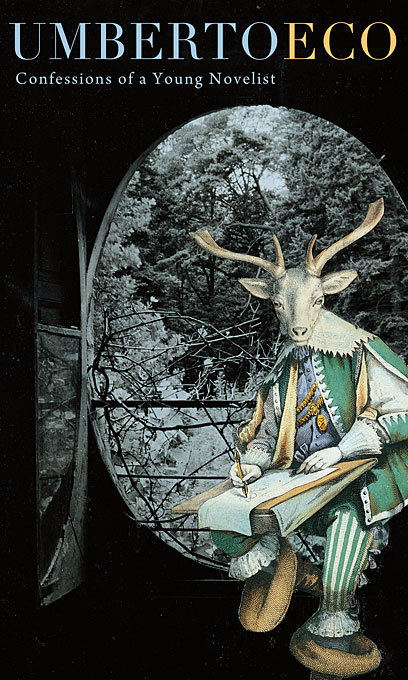 Confessions of a Young Novelist

“Umberto Eco wrote his first novel, The Name of the Rose, in 1980. It was the first of only five novels, and it was a runaway bestseller. The Name of the Rose was so popular that critics accused Eco, a semiotics professor, of programming a computer with a secret formula for a successful novel. Eco was, of course, offended and fired back a series of sarcastic modest proposals that pretty much flattened his critics. There may not be a formula, or a recipe, but there are ingredients for a successful novel, and now, decades later, Eco has decided to tell us what he believes they are.”—Susan Salter Reynolds, The Los Angeles Times

“Is there anything Umberto Eco cannot do? It has been said before and certainly will be said again—Umberto Eco is a true Renaissance man… Now, with the publication of Confessions of a Young Novelist, he offers readers an effective primer on both his oeuvre and the contemporary field of semiotics… Akin to a Paris Review interview turned essay, Confessions is both polemic and intensely personal, infused with Eco’s trademark fastidiousness and also bursting with bombasticity. No matter the subject, Eco appears both grandiose and also dedicated to the minutiae. For a public figure and academic, he is delightfully unguarded and frank… The fruits of Eco’s semiotic detective work…are presented so clearly as to become Confessions’s most fascinating revelations… He posits in his very first paragraph that he is indeed a young novelist. We know this to be untrue, Eco is currently nearing eighty. But this, his first confession, that despite all his fame and honorifics he feels like an amateur, is what imbues all the pages beyond with such vibrancy and hunger—Eco is just another reader, trying to understand.”—Hillary Kelly, The Millions

“Confessions of a Young Novelist offers a brief glimpse into the mind and process of one of the most important writers of the last 30 years… Eco is a jocular and insightful writer (and speaker), and his ability to present the complex as if it were comprehensible makes Confessions of a Young Novelist a pleasant, albeit brief, read… It’s rare to be invited into a great writer’s intimate space, an opportunity that shouldn’t be taken for granted.”—Michael Patrick Brady, PopMatters

“For good book chat it’s hard to beat Umberto Eco. The mega-selling Italian novelist, essayist, semiologist, scholar and critic has long been one of our best informed and entertaining commentators on literary matters, and in [this] new book he proves he’s still near the top of his game.”—Alex Good, The Toronto Star

“After a lapse of 30 years since his venture into fiction, [Eco] has come up with a meandering little book that offers his readers an effective primer on both his oeuvre and the contemporary field of semiotics… Laced with Eco’s fastidiousness but delightfully unguarded and frank, Confessions is divided into four parts with the idea of providing a peek into the elusive process of a writer or what could be described as literary theory.”—Business Standard

“Refined by a lifetime of reading, studying, and creating texts across languages, genres, and centuries, the wisdom of this ‘young’ novelist abounds.”—Brendan Driscoll, Booklist

“Eco addresses interesting questions: what is the boundary between fiction and nonfiction? How do novelists put together books? Why do we care about wholly fictional characters like Anna Karenina or Emma Bovary?… As always, Eco is diverting to read. Recommended as a valuable introduction to how an important writer produces his fiction.”—David Keymer, Library Journal

“This book is a complex little gem: light and entertaining reading with an underlying thrust that is serious and sparkling with insights. Eco promises delight and instruction and delivers both.”—Wlad Godzich, University of California, Santa Cruz