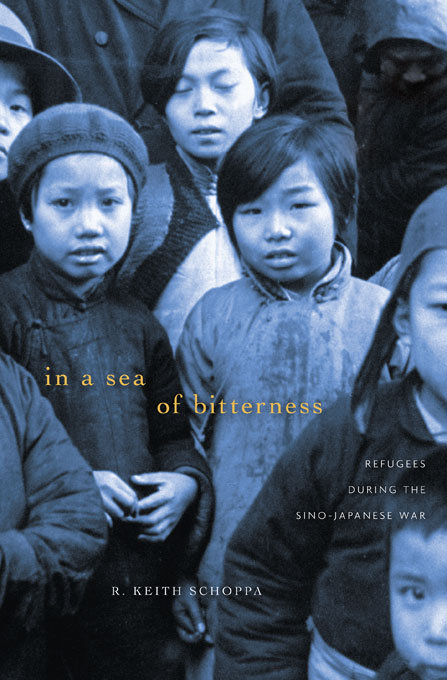 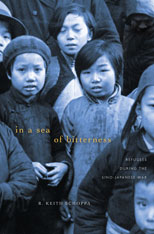 In a Sea of Bitterness

Refugees during the Sino-Japanese War

The Japanese invasion of Shanghai in 1937 led some thirty million Chinese to flee their homes in terror, and live—in the words of artist and writer Feng Zikai—“in a sea of bitterness” as refugees. Keith Schoppa paints a comprehensive picture of the refugee experience in one province—Zhejiang, on the central Chinese coast—where the Japanese launched major early offensives as well as notorious later campaigns. He recounts stories of both heroes and villains, of choices poorly made amid war’s bewildering violence, of risks bravely taken despite an almost palpable quaking fear.

As they traveled south into China’s interior, refugees stepped backward in time, sometimes as far as the nineteenth century, their journeys revealing the superficiality of China’s modernization. Memoirs and oral histories allow Schoppa to follow the footsteps of the young and old, elite and non-elite, as they fled through unfamiliar terrain and coped with unimaginable physical and psychological difficulties. Within the context of Chinese culture, being forced to leave home was profoundly threatening to one’s sense of identity. Not just people but whole institutions also fled from Japanese occupation, and Schoppa considers schools, governments, and businesses as refugees with narratives of their own.

Local governments responded variously to Japanese attacks, from enacting scorched-earth policies to offering rewards for the capture of plague-infected rats in the aftermath of germ warfare. While at times these official procedures improved the situation for refugees, more often—as Schoppa describes in moving detail—they only deepened the tragedy.