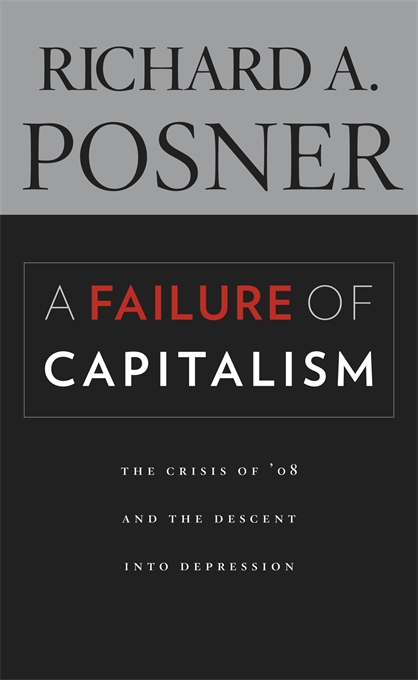 A Failure of Capitalism

The Crisis of ’08 and the Descent into Depression

“Posner has managed to write a compelling book on the crash… The book has numerous worthwhile insights, including a surprisingly Keynesian analysis of the dynamics of depressions.”—Robert Kuttner, The American Prospect

“A surprising volume that explains what happened to the banking system and economy in terms the lay reader can easily understand… [Posner’s] critique is bracing, all the more so because it comes from a right-leaning thinker normally hostile to the ministrations of government bureaucrats.”—Paul M. Barrett, The Washington Post Book World

“Richard Posner is a phenomenon… He provides a very competent account of the events which led to the current crisis, with an emphasis on the political and ideological context.”—John Kay, Financial Times

“Before seeking political asylum in free-market Hong Kong, consider reading a new book that critiques what went wrong with capitalism, written in order to save it. Judge Richard Posner’s A Failure of Capitalism: The Crisis of ’08 and the Descent into Depression is noteworthy. As a longtime University of Chicago professor and father of the free-market-based law-and-economics movement, Judge Posner makes an unlikely critic of capitalism. But as author of some 40 books and as the most frequently cited federal appeals court jurist, he is also one of our most original and clearheaded thinkers.”—L. Gordon Crovitz, The Wall Street Journal

“It comes as something of a surprise that Posner, a doyen of the market-oriented law-and-economics movement, should deliver a roundhouse punch to the proposition that markets are self-correcting. It might also seem odd that a federal appellate judge (and University of Chicago law lecturer) would be among the first out of the gate with a comprehensive book on the financial crisis—if, that is, the judge were any other judge. But Posner is the late Daniel Patrick Moynihan’s successor as the country’s most omnivorous and independent-minded public intellectual. By now, his dozens of books just about fill their own wing in the Library of Congress… Compact and bracingly lucid… By the last page, not a single lazy generalization has survived Posner’s merciless scrutiny, not one populist cliché remains standing. A Failure of Capitalism clears away whole forests of cant but leaves readers at a loss as to where to go from here. In other words, it is only a starting point—but an indispensable one.”—Jonathan Rauch, The New York Times Book Review

“[Posner] has the rare kind of mind that is a pure pleasure to watch in action, regardless of the subject and the argument being made.”—John Lanchester, The New Yorker

“The best book describing this malaise is Richard Posner’s A Failure of Capitalism. The distinctiveness of his case is that he is a prominent conservative thinker with the intellectual acuity to argue that the crisis is not to do with the traditional enemy of conservatism, big government, but is a consequence of decisions taken by private firms. The ill-effects of those decisions were worsened by deregulation of banking.”—Oliver Kamm, The Times

“[Posner] is the quintessential U.S. economic-conservative intellectual… So an excoriating attack by Posner on modern financial market practices is news. A Failure of Capitalism is precisely that. There are still U.S. conservatives who think the crisis was overdone, that the policy response has been too great, that this was merely a crisis of confidence and liquidity, and that the banking system was not insolvent, merely illiquid. That is not Posner’s view. His judgment is that the banking system is insolvent and the crisis that took place in 2008 transformed a recession in the US into a depression… In his preface, Posner emphasizes that he has written the book in medias res, a lawyer’s way of saying ‘in the thick of it,’ with the implication that he has yet fully to make up his mind. He has, however, offered a thought-provoking interim analysis of what went wrong.”—Warwick Lightfoot, Financial World

“[A] compelling read… Notable for [its] high seriousness and sophistication.”—Robert Teitelman, The Huffington Post

“Richard Posner is one of America’s most prominent and prolific public intellectuals… With his concise, jargon-free analysis of the current economic crisis, Posner has cast his lot with those who believe that the ‘depression’ (given the steep reduction in consumption, credit and production, the term, he insists, is appropriate) was the result ‘not of intrusive, heavy-handed regulation of housing and finance, but of deregulation, hostility to taxation and to government in general.’”—Glenn C. Altschuler, The Jerusalem Post