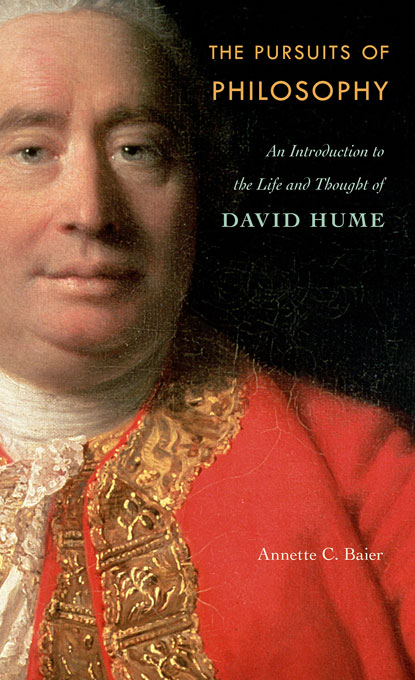 The Pursuits of Philosophy

An Introduction to the Life and Thought of David Hume

Marking the tercentenary of David Hume’s birth, Annette Baier has created an engaging guide to the philosophy of one of the greatest thinkers of Enlightenment Britain. Drawing deeply on a lifetime of scholarship and incisive commentary, she deftly weaves Hume’s autobiography together with his writings and correspondence, finding in these personal experiences new ways to illuminate his ideas about religion, human nature, and the social order.

Excerpts from Hume’s autobiography at the beginning of each chapter open a window onto the eighteenth-century context in which Hume’s philosophy developed. Famous in Christian Britain as a polymath and a nonbeliever, Hume recounts how his early encounters with clerical authority laid the foundation for his lifelong skepticism toward religion. In Scotland, where he grew up, he had been forced to study lists of sins in order to spot his own childish flaws, he reports. Later, as a young man, he witnessed the clergy’s punishment of a pregnant unmarried servant, and this led him to question the violent consequences of the Church’s emphasis on the doctrine of original sin. Baier’s clear interpretation of Hume’s Treatise of Human Nature explains the link between Hume’s growing disillusionment and his belief that ethics should be based on investigations of human nature, not on religious dogma.

Four months before he died, Hume concluded his autobiography with a eulogy he wrote for his own funeral. It makes no mention of his flaws, critics, or disappointments. Baier’s more realistic account rivets our attention on connections between the way Hume lived and the way he thought—insights unavailable to Hume himself, perhaps, despite his lifelong introspection.