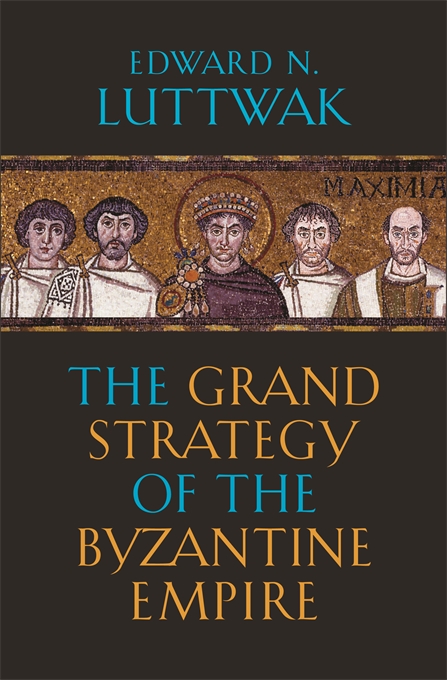 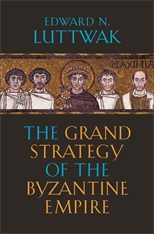 The Grand Strategy of the Byzantine Empire

“When students of grand strategy search the past for lessons, rarely do they look to the Byzantine Empire. Luttwak, who wrote a well-regarded history of the grand strategy of ancient Rome, thinks this is a mistake. In this exhaustive study, he shows how the rulers of the eastern half of the late Roman Empire were the true masters of the craft. Although the Byzantine Empire occupied a more vulnerable geographic position than its western counterpart, it lasted almost 1,000 years longer. Luttwak argues that the Byzantines survived by relying less on brute military power and more on allies, diplomacy, and the containment of their enemies. They were able, he claims, ‘to generate disproportionate power from whatever military strength could be mustered, by combining it with the art of persuasion, guided by superior information.’ The book makes this argument through fascinating chapters on religion and statecraft, envoys, dynastic marriages, and the Byzantine art of war, as well as through evocative details about weapons, military tactics, and taxes. Although the Byzantine Empire did not have a foreign minister, intelligence agencies, or theories of ‘smart power,’ it certainly acted as if it did.”—G. John Ikenberry, Foreign Affairs

“Luttwak tells his story well. He is especially good on fine detail. Whether describing the lethal ‘composite reflex bow’ used by Hun archers or the complex but surprisingly efficient Byzantine tax system, he is both vivid and exact… Though no Hun bows survive, Luttwak’s meticulous descriptions convey their deadly efficiency. It is through such details that a modern reader captures some sense of the sheer terror that those ancient raiders inspired. Even on obscure theological matters, such as the wrangles over ‘monotheletism’—the proposition that Christ had two natures, human and divine, united by a single will—he is refreshingly lucid… Notwithstanding its erudition, this is an impassioned book, and all the better for that… Historically remote as they are, the Byzantines may have something to teach Americans about long-term survival.”—Eric Ormsby, Wall Street Journal

“Nothing Luttwak writes is uninteresting… His ventures into the military history of antiquity and the Middle Ages are unlike the work of academic historians and equally unlike the superficial surveys produced by journalists for the general public. Thanks to his polyglot reading, his many scholarly contacts and his opinionated style, he succeeds wondrously in reaching both specialists and the public… If the practicality of what he suggests is less than obvious in any given contemporary crisis, the historical analysis which has brought him to his conclusions is exciting, challenging and erudite. It is rare and refreshing to find such deep research on a great empire of the past deployed so eloquently for the guidance of the beleaguered governments of the present.”—Glen Bowersock, London Review of Books

“If there’s a single overriding lesson for Americans from Byzantium in Luttwak’s fine and definitive work, it is that we ought to make use of Byzantine methods so that we may never be in Byzantine straits.”—Joshua Trevino, New Ledger

“This book is good history as well as being an insightful commentary on strategy… American soldiers and diplomats who helped turn enemies into allies in creating the Sunni Awakening in Iraq will recognize and empathize with what the Eastern Romans did for centuries. This is a timely and relevant work… Luttwak does an excellent job of describing the intelligence system of the Eastern empire, from its tactical use of scouting and patrolling to its strategic use of spies and double agents in the courts of its enemies… Luttwak does a great service in giving us a readable account of how the Byzantines managed national-security strategy in a way that should be useful to contemporary soldiers and civilian policymakers. It is also a very good read.”—Gary Anderson, Washington Times

“One of America’s leading strategic minds… The traditional stereotype of the Byzantine Empire, established by Edward Gibbon in his Decline and Fall of the Roman Empire, has undergone considerable revision of late, thanks to a renaissance of Byzantine studies, to which Edward Luttwak has now made an important contribution. Luttwak had long promised a sequel to Grand Strategy of the Roman Empire covering the Roman Empire in the East from the fourth through the fifteenth centuries, and finally it is here.”—Stuart Koehl, Weekly Standard

“The Grand Strategy of the Byzantine Empire is written with a profound knowledge of the field, a thorough mastery of the sources and secondary literature, and a lively and engaging style that both specialists and general readers will appreciate.”—Peter B. Golden, Rutgers University

“Edward Luttwak makes a persuasive, well-documented argument that the Byzantines—given the continuity of their institutions, their sense of a historical mission, and their own manuals on statecraft and warfare—had a coherent strategy that enabled them to preserve an empire shielded by few geographical barriers and surrounded by a host of hostile neighbors.”—Eric McGeer, author of Sowing the Dragon’s Teeth: Byzantine Warfare in the Tenth Century