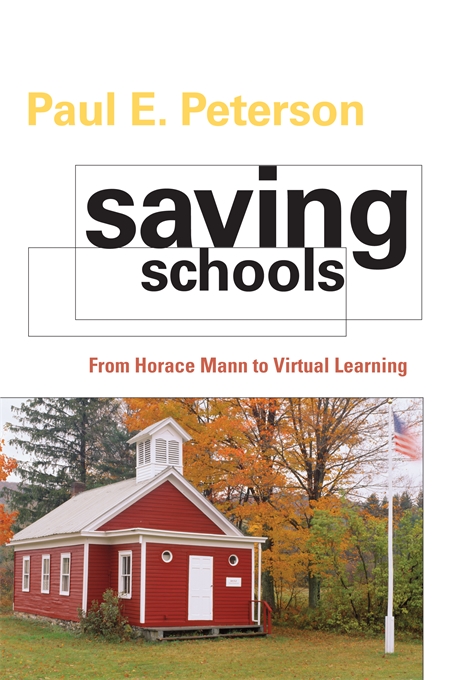 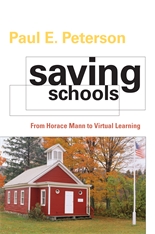 From Horace Mann to Virtual Learning

“American public schools were inspired and created largely using the ideas of six education reformers: Horace Mann, John Dewey, Martin Luther King Jr., Albert Shanker, William Bennett and James Coleman. In Saving Schools, Paul E. Peterson shows how their dreams went wrong; how public schools became a political football with families and communities on one end of the field and states, courts, and federal governments on the other. Peterson sees virtual learning as the solution—technology could be used to reinvigorate the personalized approach that public education’s founders and philosophers dreamed of.”—Susan Salter Reynolds, The Los Angeles Times

“Peterson is always a delight to read… I enjoyed the entire book.”—Jay Mathews, The Washington Post online

“The best books show you a new way of thinking about a familiar issue. Paul Peterson’s Saving Schools: From Horace Mann to Virtual Learning offers a new way of thinking about education reform by recounting the histories of reformers… I encourage you to read it. It is full of insights and nice turns of phrase. Peterson is an able writer, graceful rather than powerful. Happily, the book lacks condemnations, sanctimony, or dewy-eyed platitudes, which puts it in rare company.”—Daniel Willingham, The Washington Post blog

“Peterson is at his best when he chronicles the history of the major ideas that have underpinned modern education reform… Over the course of his long career, Paul Peterson has made major contributions to the cause of education reform—and he’s had ample opportunity to become discouraged. Yet he believes that we will, in the not-too-distant future, renew American public education. Let’s hope he’s right.”—Marcus A. Winters, City Journal

“This new book by Peterson stands out among the many excellent titles published each year on education history and reform. Peterson traces the history of education in the United States from its rise in the mid-19th century to the early 21st century through the work of six major figures: Horace Mann, John Dewey, Martin Luther King Jr., Albert Shanker, William Bennett, and James Coleman… Peterson provides an outstanding review of the rise, decline, and potential resurrection of the U.S. educational system. Education professionals, politicians, and anyone else interested in education will benefit from reading this book.”—Mark Bay, Library Journal

“[An] excellent history of American education… [It] explores the reasons why public schools have stoutly resisted efforts to introduce choice and competition to education… If we’re ever going to reform our schools successfully, we need to know why American education remains largely a centralized monolith. School reformers will find a great deal of valuable information in Mr. Peterson’s thoughtful and informative book.”—Martin Morse Wooster, The Washington Times

“Paul E. Peterson has written a deep and rich history of public education in America and the people and forces that shaped it. He brings together policy, research, and political issues with genuine sophistication and hard-edged thinking. He believes we’re finally poised for a big step forward, using technology to customize the learning experience and empower both students and their families.”—Chancellor Joel Klein, New York City Department of Education