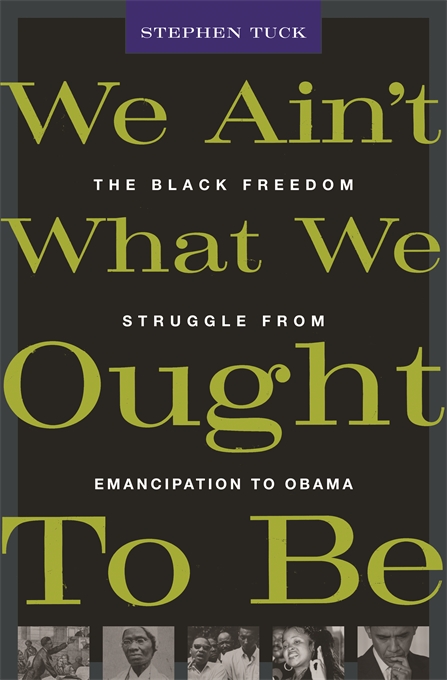 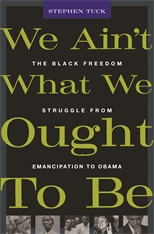 We Ain’t What We Ought To Be

The Black Freedom Struggle from Emancipation to Obama

“Oxford University lecturer Stephen Tuck’s We Ain’t What We Ought To Be is a collection of voices that document our struggle for equality in America from the Reconstruction era until now. It’s all here—the great speeches and moments—but it’s the nod to the common woman and man that lifts this narrative a notch above similar titles.”—Patrik Henry Bass, Essence

“Masterly… From Reconstruction through the election of President Barack Obama, from the blues through hip-hop, from strikes by black longshoremen in New Orleans in 1867 to Hurricane Katrina in 2005, Tuck recounts the efforts of blacks to obtain full American citizenship without discarding their cultural heritage. Pluralism, more than integration, characterizes this monumental and tragic history… This book is comprehensive, balanced, and readable. It stands as the best interpretive volume of the black freedom struggle since 1865.”—Steven F. Lawson, Journal of American History

“We Ain’t What We Ought To Be is an astounding exercise in synthesis, bringing together the past decade of research on the African-American experience. To scholars of southern and black history, what Tuck calls ‘revelations’ will be anything but. However, most Americans are still under the spell of the genre’s first generation, with its neat divisions between North and South, violent and nonviolent, and civil rights and Black Power. Tuck’s book could change that.”—Clay Risen, Bookforum

“A multitude of black experiences have contributed to the complexity and diversity of the civil rights struggle beyond the iconic portrayals of the movement. Historian Tuck juxtaposes local versus national, southern versus northern, violent versus nonviolent, wartime versus peacetime, secular versus religious, separatist versus integrationist, and other polarities. Tuck profiles famous and obscure African Americans who have struggled for human and civil rights since slavery. Along with Sojourner Truth, Frederick Douglass, W.E.B. DuBois, and others, he profiles Robert Smalls, an enslaved assistant to a captain in the Confederate navy, who sailed the ship to freedom while the white crew and captain slept, and Fanny Peck, a black Detroit housewife who launched a boycott in 1930 of businesses that didn’t hire blacks. He chronicles struggles of black feminists, gays and lesbians, environmentalists, and others who don’t often make the pages of the history books. In this well-researched volume, Tuck details protests large and small, individual and organized, from Emancipation to the election of Barack Obama.”—Vanessa Bush, Booklist

“Besides its success a riveting piece of narrative writing, Stephen Tuck’s account of ‘the long civil rights movement’ is an excellent reminder about the complexities of history… Tuck, a British scholar who lectures on American history at Oxford, has carried out wide-ranging research and written with a fresh approach that enlivens the many sub-themes woven into the whole. From his angle across the waters, his story is as sobering as it is captivating.”—Mark Knoll, Books & Culture

“Stephen Tuck has written what must be the most comprehensive history of the civil rights movement that you’ll find in a single volume… Stephen Tuck has successfully tackled and tamed a beast of a topic. The writing is crisp and clear yet poetic in its way. There is so much documented information that filler is unnecessary, which makes this history of a complex, multi-century process as readable as any page-turner. We Ain’t What We Ought To Be belongs in the classroom and on students’ reading lists, but it also fits into the personal library as a reference and a reminder of how the conviction and determination of individuals can lead to world-changing unity.”—Deborah Adams, Curled Up with a Good Book

“In this sweeping and absorbing history of black activism, Tuck highlights the achievements of community organizing from the mid-19th century to Barack Obama’s dexterous grassroots campaign for the presidency. Tuck argues that there is no one black protest movement or agenda and casts his net over 150 years of black political engagement to reel in untold stories and unsung heroes. He is particularly attentive to the first 20 years of the 20th century, which saw protest, empowerment, and the rise of galvanizing figures from Marcus Garvey to boxer Jack Johnson. While the civil rights movement of the 1960s has become emblematic in the chronology of black history, according to Tuck, it does not define the ongoing fight for social justice and freedom among blacks in America. With rich detail and a strong narrative, Tuck fills in gaps in the story, from the lesser known backroom dealings of Booker T. Washington to the noble efforts on behalf of black women by Anna Julia Cooper.”—Publishers Weekly

“Tuck is one of the very best historians of the civil rights movement. His remarkable account of the long civil rights movement across the nation is brilliantly written and impeccably researched. No other account brings to light grass-roots struggles in so many parts of the country.”—Tony Badger, Professor of American History, Cambridge University

“Fresh in conception and assured in execution, this wonderfully rich history of the African American experience weaves graphic human stories of ordinary black people into the larger sweep of political and social change. Written with flair, colour, and sensitivity, it confirms Tuck as a leading historian of American race.”—Richard Carwardine, Lincoln Prize–winning author of Lincoln: A Life of Purpose and Power

“Richly detailed, brimming with insight, and marvelously accessible, Stephen Tuck’s fast-paced account of African Americans’ obdurate fight for equality and justice is the most exciting account of the modern black freedom struggle I have ever read. Consistently attentive to the experiences of ordinary colored folk as well as the actions of race leaders like Marcus Garvey and Martin Luther King and rightly insistent on the need to connect the northern and southern struggles, it sets new standards for scholars of the civil rights movement and the wider—much wider—history of black protest in the United States.”—Robert Cook, author of Sweet Land of Liberty?: African-American Struggle for Civil Rights in the 20th Century

“We Ain’t What We Ought To Be is a provocative and important book that deftly probes both the certainties and the ambiguities of the unending struggles of everyday people for social justice and an end to racism.”—Darlene Clark Hine, Former President, the Organization of American Historians, and the Southern Historical Association

“Tuck delivers a riveting, challenging, and beautifully rendered interpretation of the black freedom movement that tells a powerful and compelling story—one that refuses to reduce black folk to mythic heroes or tragic victims. An essential introduction for anyone who wants to understand the last century and a half, the era of America’s greatest revolutions.”—Robin D. G. Kelley, author of Thelonious Monk: The Life and Times of an American Original

“From Frederick Douglass and Henry M. Turner to Barack Obama and Chuck D, from Redemption to Katrina, it’s all here—the incredible resiliency and resourcefulness of women and men determined to endure and to overcome. An extraordinary odyssey, captured vividly and imaginatively by Tuck, in which the black voice is heard loudly and clearly.”—Leon F. Litwack, Pulitzer Prize–winning author of Trouble in Mind: Black Southerners in the Age of Jim Crow

“Tuck’s is the best single volume history of the long civil rights movement—at once remarkably thorough and admirably concise, richly detailed and strongly argued. Drawing on a rich vein of scholarship in numerous fields, he has produced a new synthesis for a new generation.”—Bruce J. Schulman, author of The Seventies: The Great Shift in American Culture, Society, and Politics