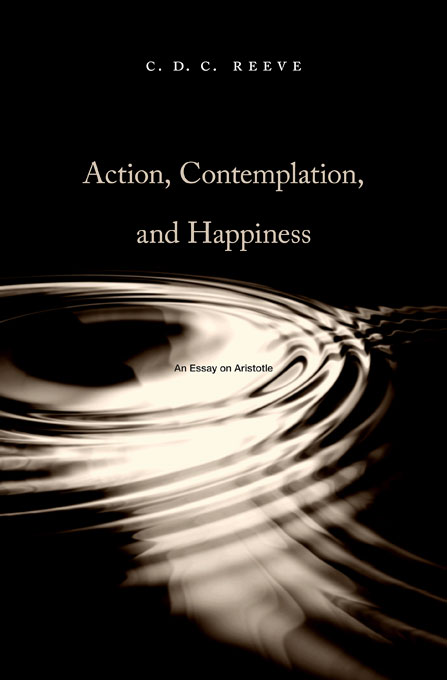 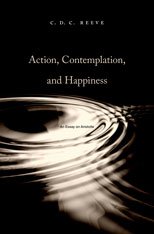 An Essay on Aristotle

“The title of this book might suggest that it is an essay dealing exclusively with themes in Aristotle’s Ethics, but this study by Reeve is actually a comprehensive analysis of themes in Aristotle’s biology, psychology, physics, metaphysics, and more. It encompasses Aristotle’s remarks on the generation of animals, through his teleological and hylomorphic physics, into his analysis of desiderative and rational (practical and theoretical) functions of human souls. Reeve weaves all of these themes together toward the final end and purpose of all things, namely, union with and contemplation of pure form—God. The end of all actions and activities of hylomorphic, sublunary substances is ultimately to shed their matter and be absorbed into ‘thought itself’ (God). When looking in this way at happiness, the human end, the apparent dichotomy of ‘action’ and ‘contemplation’ dissolves into one. Aristotle’s Physics, Ethics, and Metaphysics become united. Reeve displays awareness of all the most recent scholarship on Aristotle. His translations, interpretations, and explanations of difficult passages are lucid and convincing. This is one of the finest recent publications on Aristotle.”—P.A. Streveler, Choice

“I like this book a lot. Reeve covers lots of Aristotle, gets the reader involved and wanting to see how it all goes together, and in the end takes us back to the beginning, so that we see everything again in a new way.”—Julia Annas, University of Arizona

“Reeve’s marvelous new book—Action, Contemplation, and Happiness—takes up the notions central to Aristotle’s ethics and political philosophy and embeds them appropriately and deeply in Aristotle’s epistemology, metaphysics, physics, psychology, and theology. Reeve’s analyses are far-reaching and subtle, and he brings new illumination to longstanding controversies. This book will be essential reading for any student of Aristotle’s ethics or of Aristotle and, more generally, for any student of ancient ethics.”—Christopher Bobonich, Stanford University

“Action, Contemplation, and Happiness is an important contribution to Aristotelian studies, lively, accessible, well-informed and up to date, with independent readings of particular passages and a distinctive overall perspective, placing Aristotle’s ethical views in the wider context of his metaphysical and theological ideas. It deserves, and will fully repay, close attention.”—David Charles, Oxford University

“Reeve’s new book will be extraordinarily helpful and influential for any number of different sorts of readers, including non-specialists with a serious philosophical interest in Aristotle (like me). Everything of importance in Aristotle’s discussions of what sorts of things human beings can do, and what sorts of beings they are (especially what counts for them as happiness and the greatest happiness), is laid out in lapidary prose, systematically interconnected, interpreted with great concision as well as remarkable breadth, and with a focus always on the deepest philosophical issues. The book is a masterful achievement.”—Robert B. Pippin, University of Chicago

“Reeve’s new engagement with Aristotelian ethics is, characteristically, as ambitious in scope as it is skillful in execution. With such diverse domains as biology, epistemology, ontology, theology and political theory fused into a single illuminating narrative, Aristotle’s focal values are here showcased, as they too rarely are, in their full philosophical context.”—David Sedley, University of Cambridge

“A comprehensive account of Aristotle’s thought, masterful and philosophically astute, this book could have come only from a scholar who has spent much of his life contemplating the texts of this great philosopher. It is clear and elegant, welcoming to beginners and informative to old Aristotle hands.”—Paul Woodruff, University of Texas at Austin