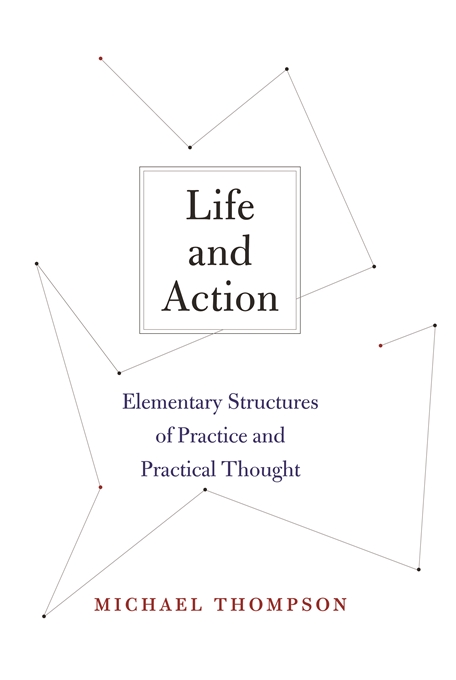 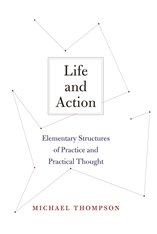 “An exceptional piece of philosophy that is a reservoir of deep insights concerning life, action, and practices. The theory of action developed here, in particular, stands among the most significant contributions to action theory in recent years. It is quite simply a ‘must read’ for anyone working in the area. Although Thompson’s arguments will be of particular interest to philosophers working in action theory and ethics, they have much to offer those with interest in logic, philosophy of biology, metaphysics, philosophy of language, and philosophy of psychology… Thompson’s theory of action is dazzling—deep, original, revolutionary, and in certain respects (I suspect) just plain right.”—Paul Hurley, Notre Dame Philosophical Reviews

“Thompson has developed a remarkably fresh and compelling account of three fundamental concepts in practical philosophy—life, action, and practice. Moreover, this account, in the manner in which it seeks to explicate and display the contents of these concepts, implicitly develops an original understanding of the nature and method of philosophy—a methodological conception which is of great general philosophical interest in its own right, apart from its local application to topics in ethics. His work is that rare thing: a contribution that stands a chance of transforming the subject. One interesting feature of Thompson’s approach is that it is very difficult to place with respect to the ongoing mainstream debate in contemporary moral philosophy between naturalists and anti-naturalists. He has managed to find an entirely novel angle at which to enter the contemporary debate—one which places him in equal degrees within and outside both camps at once. Thompson’s account is, in fact, a resolutely naturalist one, but of such an unorthodox variety that it helps to bring out the depth and character of the unquestioned assumptions that are usually taken for granted by all parties in the contemporary debate—assumptions regarding what any form of naturalism in philosophy must look like. In philosophy, quantity cannot be judged apart from quality. Some books are much longer than they appear; most are much shorter than their length, measured in pages, would lead one to suppose. The density of thought per page in this book is of a rarely paralleled order: it both requires and repays many re-readings.”—James Conant, University of Chicago

“Thompson provides an original account of the fundamental character of the concepts central to practical philosophy, which depends on a conception of philosophical method which is itself of great general interest, over and above its significance for practical philosophy. Michael Thompson is a philosopher of the first importance.”—Cora Diamond, University of Virginia

“Life and Action is one of the most important books to appear in philosophy in a generation. Thompson’s reflections on life-form, on action and intention, and on social practices light up the field. Rarely does one encounter thinking of this depth, rigor and originality. If the philosophical understanding of human life matters to you, this book is absolutely required reading.”—Jonathan Lear, University of Chicago

“Thompson develops a modern version of an Aristotelian account of morality through reflection on the category of the specifically human, in contrast to the more prominent, broadly Kantian, focus on that of the person. He makes the focus on the idea of the human much more compelling, and much more difficult to escape, than anyone else has managed to do. He raises and addresses profound and fascinating issues about the sort of generality of which any approach to practical philosophy must take account. It reframes central debates in the areas it touches, and does so with a dazzling degree of depth.”—Arthur Ripstein, University of Toronto

“Thompson’s work does not build on the foundation of some given literature. It lays the foundation. Of course, his thought rests on the history of the subject, but not in the way that it takes something for granted, treats something as established elsewhere. This explains the stunning originality of Thompson’s work. Each of his essays reveals possibilities for thought unknown to the contemporary literature. It is not audacious to predict that Thompson will be the leading figure in moral philosophy over the next twenty years, and this far beyond the confines of Anglophone philosophy.”—Sebastian Rödl, Universität Basel