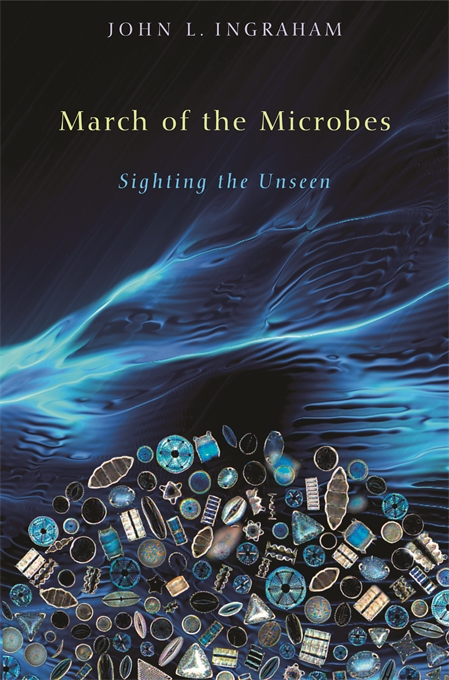 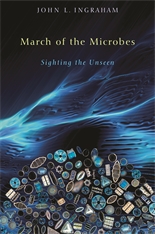 March of the Microbes

“John Ingraham has written the definitive field guide for microbe watching, a branch of natural history that, to the uninitiated, might seem oxymoronic. Microorganisms being, by definition, creatures too small to be seen by the unaided eye, one might wonder…why anyone would need a guide to seeing the unseeable. Read just a few pages, however, and the puzzle is solved. Sure, microbes are tiny, but they are so prolific that their effects on the world are both profound and highly visible—from the black mold on bathroom walls to the red tide that sporadically discolors and poisons long expanses of shoreline… He blends the deep knowledge of an academic with the passion of a microbe watcher extraordinaire—which makes this guide as entertaining as it is informative.”—Laurence A. Marschall, Natural History

“From the mundane (a smelly fish, a child with earache) to the exotic (hydrothermal vents), Ingraham presents the microbes behind so much of the world around us. He drives home the point that without these overlooked life forms we wouldn’t be here at all… Ingraham’s fresh perspectives makes it an engaging read.”—Jo Marchant, New Scientist

“Traverse the eclectic landscapes of soil, champagne, a Yellowstone spring, Italian salad dressing, and even the human stomach with microbiologist John L. Ingraham as your guide. This remarkable tour will transform novices into keen microbe-watchers in a mere 300 pages—which sounds like a lot, until you realize how much ground there is to cover in humanity’s relationship with our most minuscule ‘friends.’ For instance, it was microbes that transformed the entire face of our planet, via the ‘Oxygen Revolution’ some 3 billion years ago. We have them to thank for literally every breath we take. This is but one example. With the Earth estimated to have a nonillion (that’s one followed by 30 zeros) microbes in and around it, we might as well get to know our tiny neighbors.”—Seed

“In this engaging treatment, the microbiologist shows readers the invisible world through observations about its macroscopic manifestations in a range of environments, from the kitchen to the abyss of the sea… Ingraham describes some of their malicious cousins who blight crops, kill trees, and sicken humans. Ingraham’s clarity, plus touches of humor, augments the appeal of this fine contribution to popularizing science.”—Gilbert Taylor, Booklist

“Though most people are only familiar with microbes that cause disease (germs, etc.), those ‘felonious’ microbes actually constitute a tiny percent of all microbes, and just a single chapter in this fascinating survey of single-celled organisms and their role in shaping life on Earth… Among other processes, Ingraham explains how vaccines have been developed, frequently with the aid of other microbes; the carbon, nitrogen, and sulfur cycles which make life possible; and how microbes give us cheese, wine, and other foodstuffs (though some, like xanthan gum, readers may not want to know about). Ingraham also discusses recently-discovered microbes inhabiting extreme environments (hot, cold, salty, etc.) that promise to tell us much about the evolution of life on Earth and what life on other planets might look like. Ingraham’s entertaining, breezy style makes even difficult topics accessible, and every chapter contains intriguing anecdotes about microbes in history (did the CIA try to poison Castro’s cigars with botulinum toxin?). Highly readable, engrossing, and endlessly informative, this is a standout example of science writing for general audiences.”—Publishers Weekly (starred review)

“March of the Microbes is an impressive, entertaining tour of life’s invisible realm. Combining history with new scientific discoveries, John Ingraham shows how microbes make their presence felt everywhere. You just have to know how to look for it. After reading this book, you will.”—Carl Zimmer, author of Microcosm: E. coli and the New Science of Life