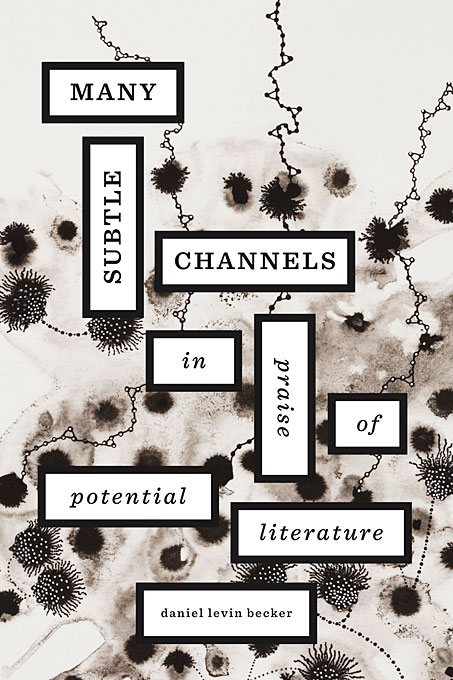 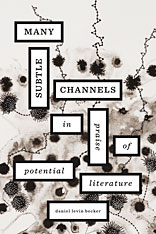 In Praise of Potential Literature

“In Many Subtle Channels, [Levin Becker] succeeds in sharing his quirky regard for the unpredictable coincidences of language, and in making the reader see the world, briefly, in an Oulipian way.”—Lauren Elkin, The Times Literary Supplement

“A distinctly intimate and exceptionally entertaining book… If you enjoy crosswords, intricately structured mysteries à la Agatha Christie, puns, hypertext fiction, shaggy dog stories, Bourbaki mathematics, the games of chess and Go, or simply work that boggles the mind, then you really need to discover the OuLiPo… [Levin Becker] makes an ideal guide to the ingeniously madcap wonderland that is potential literature and art.”—Michael Dirda, The Washington Post

“Many Subtle Channels is a reliable history of the Oulipo and a Bildungsroman-ish account of a young writer’s development into writerhood. At its best the enthusiasm is infectious, not just about the Oulipo (and Levin Becker’s evident elatedness at having been made a member), but more generally about the pleasures of reading and writing. [Levin] Becker makes clear what is exciting about the Oulipo: the discovery and application of constraints; the annihilation of cliché; the setting up of encounters between literature, mathematics, music and computers; analyzing and exploring, but also broadening and generalizing, the dynamics of composition.”—Paul Grimstad, London Review of Books

“Many Subtle Channels is Levin Becker’s personal history of this literature and his tribute to the people who helped create it, including [Georges] Perec, Jacques Roubaud, Italo Calvino, and Marcel Duchamp… Levin Becker gets Oulipian obsessiveness on a gut level, and his delight in palindromes and lipograms (texts that, like the Perec novel [La Disparition], are entirely devoid of a particular letter) vividly comes to life in his writing. But the book’s most revelatory moments come when Levin Becker suggests that this obsessiveness comes hand in hand with a deep need for guidance. Perec once said that ‘the intense difficulty posed by this sort of production…palls in comparison to the terror I would feel in writing ‘poetry’ freely.’ The constraints the Oulipians place on themselves and on each other are by nature arbitrary. Sometimes, the texts end up tricking unwitting reviewers—one unsuspecting critic missed the conceit of La Disparition completely and panned the novel for being ‘stilted’—but mischief, writes Levin Becker, isn’t really the point. Oulipian texts existed for decades before the collective was formed and will likely continue even if the collective disbands. Random as Oulipian practices may seem, they actually embody one of the most fundamental challenges that all writers face—to test and push the boundaries of language.”—Atossa Araxia Abrahamian, Bookforum

“Skillfully introduces readers into the domain of constraint-based writing… Part personal narrative, part historical survey, and part expository essay, Channels begins with its author’s own curiosity about the Oulipo and proceeds into an exhaustive interrogation of its principal methods and aims… Levin Becker is a charming guide to the joys of this quixotic fixation on form… Channels demonstrates that Levin Becker has earned his place within the Oulipian phalanx: he knows the work and deftly initiates readers into the vexing and prismatic world view which is at the heart of the Oulipian endeavor—an enduring attention to the linguistic coordinates that populate the landscape of daily life… This book is vital because it invites us to read within the reservoir of everyday language a living work where once we saw mere billboards and text messages. Levin Becker convincingly argues that the Oulipo’s aims are hardly exhausted and that the methods of potential literature are nowise limited to writerly production—its parameters extend into the possibility for a more attuned attention to the structures that everywhere guide and confine us.”—Jason Conger, American Book Review

“[A] glorious book. [Levin Becker’s] account of acquainting himself with the men and women who are determined to discover ‘the potentially surprising ways to behold the literary possibilities of language’ is all of that: joyous, sublime, mischievous, surprising and filled with possibility… You will be enchanted by Levin Becker’s book.”—Julia Keller, The Chicago Tribune

“Essentially an account of the life and times of the Oulipo group, a Paris-based coalition of writers, mathematicians and artists that was set up in 1960 with the express intention of making life difficult for its members and readers. The clue to the real nature of the group is in ‘Oulipo’—which, when unpacked, stands for Ouvroir de la littérature potentielle, or Workshop for Potential Literature. This is meant to describe the practice of Oulipo members, who deliberately set themselves constraints on their writing. These can include palindromes, lipograms (excluding one or more letters), the snowball (a poem in which the first line is a single word, the second two words, and so on) and other myriad forms of self-imposed difficulty. The big idea is that if you set off to write, let’s say, a short story by deliberately forcing yourself to replace every seventh noun in the text with the seventh noun after it in the dictionary then you are bound to end up somewhere unexpected. Hence the term ‘potential literature.’ From this point of view, it is hard to avoid the suspicion that this is no more than a particularly mirthless form of linguistic trickiness for its own sake; a kind of highbrow Gallic version of Scrabble or indeed the quiz show Countdown. This book admirably demonstrates that this is not the case… The book is a sheer delight. Levin Becker warns us that Oulipo is not for everybody, and he makes it clear that his book will be a largely uncritical and unashamed homage to the group. He admires them so much he ends up joining them (becoming only the second American member). But most importantly he is a sharp-witted guide to the most obscure details of Oulipo activity. Above all, he emphasizes that this is not merely an eccentric offshoot of Surrealism. Rather, he describes the Oulipians as scientists in a laboratory—they experiment endlessly, preferring no conclusion to false certainty, especially the false certainties of literature in a didactic or imperative mood. As Levin Becker puts it, this is the science of literature in a conditional mood… The activities of the Oulipo group, as Levin Becker emphasizes, are all about practice and opposed to theory… What all these Oulipians have in common is the notion that play is a serious business… Indeed, as the twenty-first century grows darker by the day, it may be that we will need the effortlessly ludic lucidity of Oulipo as an antidote more than ever.”—Andrew Hussey, Literary Review

“Many Subtle Channels is something along the lines of a memoir spliced with literary criticism, reportage, and good old boosterism of a fantastic body of literature.”—Scott Esposito, The Millions

“Much has now been written about the Ouvroir de Litterature Potentielle, or Oulipo, a group of writers and mathematicians based in Paris, but there is nothing quite as deeply informed, or as provocative, or as consistently captivating as Many Subtle Channels.”—Warren Motte, Review of Contemporary Fiction

“[A] witty, dazzling and at times breathtakingly loony book… Levin Becker paints vivid portraits of a group of literary figures, prominent in the last third of the 20th century, whose personal quirks are at least as fascinating as their verbal feints. At times, this book reads as a love letter to a French avant-garde, sidelined by the recent revival of representational fiction and affective poetry. At times, it reads as a work of literary criticism and theory, arguing for a way of writing that bypasses traditional notions of inspiration and emotional content in favor of formal architecture.”—Seth Lerer, The San Francisco Chronicle

“In Many Subtle Channels, [Daniel Levin Becker] reports from the frontier about the cultural antics of a group that has stimulated some of the most influential as well as some of the most frivolous works of European literature. Levin Becker is clearly entranced by the OuLiPo, and his likably geeky fascination both with its annals and its ongoing activities draws readers in, until we are persuaded that, despite its reputation as a historical coterie, the OuLiPo’s ideas remain alive and offer something of potential value to everyone… Levin Becker is a shrewd and entertaining writer: His youthful enthusiasm is infectious and his style, which has hints of modern American intellectual goofballers such as David Foster Wallace, combines the erudite with a cheerfully self-conscious admission of obsessive word-nerdiness.”—Sara Lodge, The Weekly Standard

“A remarkable and accessible first book. [Levin Becker’s] worthy subject is OuLiPo (Ouvrioir de Littérature Potentielle), which translates as Workshop for Potential Literature. Founded in 1960, OuLiPo counts among its past members such luminaries as Italo Calvino and Georges Perec. Other writers, though famous in Europe, are unknown here, but Levin Becker’s account may change that. Serious about their fun, Oulipians do not take themselves too seriously; Levin Becker, only the second American member, doesn’t either. In this rare alloy of autobiography, biography, history, humor, meditation, ode, shaggy-dog story, and treatise, readers will discover a book that arouses an appetite for a type of knowledge one didn’t know one needed. The definition of ‘potential literature’: ‘It’s what you get when you go looking in language for meanings that aren’t there, and find them anyway.’ As Levin Becker exemplifies, to delight and instruct is a purpose not limited to literature; it seems to be a way to live.”—Michael Autrey, Booklist

“Composed in playfully erudite prose—exactly what you’d expect from an Oulipian—this intellectually stimulating journey into the infamous and provocative OuLiPo (the French acronym stands for ‘workshop for potential literature’) is suffused with the tale of Levin Becker’s artistic coming-of-age amid the ghosts of Perec, Duchamp, and Calvino.”—Publishers Weekly

“In this intimate and informative book, Levin Becker explores the history of Oulipo (short for Ouvroir de Littérature Potentielle, or Workshop for Potential Literature), easily one of the most bizarre and charming literary movements of the 20th century. Claiming Italo Calvino, George Perec, Marcel Duchamp, and Raymond Queneau among its members, Oulipo is best known for its exploration of new and seemingly impossible literary forms… Originally tasked with organizing Oulipo’s extensive archives, Levin Becker finds himself gradually inducted into the inner workings of the group before eventually being offered membership into the prestigious collective. From this unique position, Levin Becker excavates the movement’s history from its creation in 1960 by an assemblage of French writers, mathematicians and eccentrics, to its present-day iteration… As he delves further into the past and methodology of Oulipo, Levin Becker’s palpable enthusiasm for potential literature becomes infectious. One finishes this book not only with an appreciation for Levin Becker’s prose and Oulipian literature, but also with an urge to attempt it.”—Publishers Weekly

“Many Subtle Channels is both an account of a glorious chapter in the history of wordplay and an equally glorious example of wordplay at work. Its author is very, very smart, but because he’s so witty and so playful, his intelligence feels friendly rather than formidable. Remember the name Daniel Levin Becker: you will be hearing it again.”—Anne Fadiman

“Daniel Levin Becker’s brilliant and entertaining book about the Oulipo combines meticulously researched history, a complete panoply of thumbnail portraits (he uses both thumbs), shrewd critical appraisal, and—bless him!—autobiography. If Oulipians are ‘rats who build the labyrinth from which they plan to escape,’ he has explored the subtle channels of the labyrinth and caught all the rats; and he movingly describes why he is happy to have become a rat himself.”—Harry Mathews