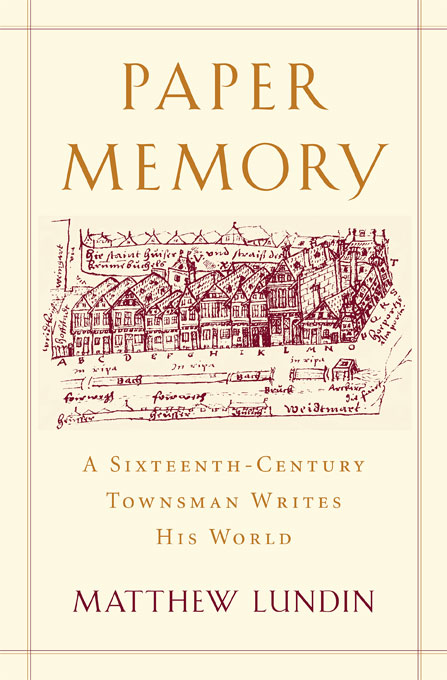 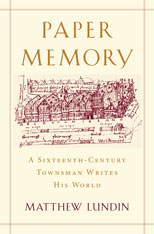 A Sixteenth-Century Townsman Writes His World

Paper Memory tells the story of one man’s mission to preserve for posterity the memory of everyday life in sixteenth-century Germany. Matthew Lundin takes us inside the mind of an undistinguished German burgher named Hermann Weinsberg, whose personal writings allow us to witness firsthand the great transformations of early modernity: the crisis of the Reformation, the rise of an urban middle class, and the information explosion of the print revolution. This sensitive, faithful portrait reveals a man who sought to make sense of the changes that were unsettling the foundations of his world.

Weinsberg’s decision to undertake the monumental task of documenting his life was astonishing, since he was neither prince nor bishop, but a Catholic lawyer from Cologne with no special claim to fame or fortune. Although he knew that his contemporaries would consider his work vain and foolish, he dutifully recorded the details of his existence, from descriptions of favorite meals to catalogs of his sleeping habits, from the gossip of quarreling neighbors to confessions of his private hopes, fears, and beliefs. More than fifty years—and thousands of pages—later, Weinsberg conferred his Gedenkbuch, or Memory Book, to his descendants, charging them to ensure its safekeeping, for without his careful chronicle, “it would be as if we had never been.”

Desperate to save his past from oblivion, Weinsberg hoped to write himself into the historical record. Paper Memory rescues this not-so-ordinary man from obscurity, as Lundin’s perceptive and graceful prose recovers his extraordinary story.