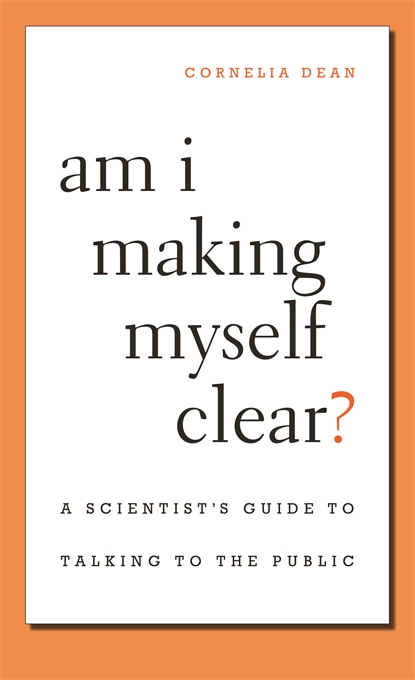 Am I Making Myself Clear?

A Scientist's Guide to Talking to the Public

“I strongly recommend this book… Any researcher looking to communicate better will find Cornelia Dean’s book invaluable. The range of ways to communicate that she covers is enlightening, challenging researchers to consider new outlets.”—Kathy Sykes, The Times Higher Education Supplement

“If you want the facts, laid down in a simple, unfussy style, then get a copy of Am I Making Myself Clear? by Cornelia Dean, veteran science writer and former science editor of The New York Times. This book should sit on the shelf of every scientist, science communicator and university press officer. I’ve never read a better, more thorough guide to science communication in all its forms. Dean’s suggestions for how to be interviewed by a journalist—for print, radio and television—are spot on. From the preparation you need to do, including how to dress on TV, to always assuming everything you say is ‘on the record,’ her book is packed full of valuable information. She also advises on producing content for the web, writing your own book and press releases, and dealing with politicians.”—Gia Milinovich, Nature

“Am I Making Myself Clear? is as much about why scientists need to talk to the public as it is about how we should talk science to the public. [Cornelia Dean] argues that scientists need to develop a civic persona that finds some way to communicate science. Dean’s wisdom, especially for engaging in the political arena, is delivered with a mix of authority and charm… Am I Making Myself Clear? ought to be required reading in all science graduate programs.”—Peter Kareiva, Science

“One can only hope that researchers—and the academic administrators who decide what the scientists of tomorrow need to know—read [this] concise, sharply written volume and take [its] message to heart. The process of reconnecting science and society cannot start soon enough.”—Tom Jacobs, Miller-McCune

“Book-length lamentations over the state of American scientific literacy are in no short supply, though a consensus on who is to blame may never be reached. Fortunately, Harvard professor and New York Times science editor Cornelia Dean cuts through this debate, getting down to the practical aspect of improving scientists’ communication skills. Dean’s advice comes in the form of a concise handbook, touching on everything from interview preparation to blogging, so some suggestions come across as easier said than done. Nevertheless, she drives home her core idea: If society is unhappy with the way the public relates to scientists’ work, there are many simple things scientists can do to meet the public halfway.”—Seed

“Highly regarded New York Times science reporter Dean presents a handbook for any scientist called upon to talk to a reporter, go on television, lobby legislators or in general answer that age-old question, What exactly is it you do? In this age of sound bites and Twitter, Dean exhorts her readers to keep things short and simple. Her advice ranges from what to wear on TV to how to write an op-ed piece to avoiding the appearance of personal gain when lobbying members of Congress. Many of Dean’s suggestions are common sense (know what you’re going to say, don’t slouch), but make useful tips for anyone who comes into contact with the media, courts, or legislative bodies.”—Publishers Weekly