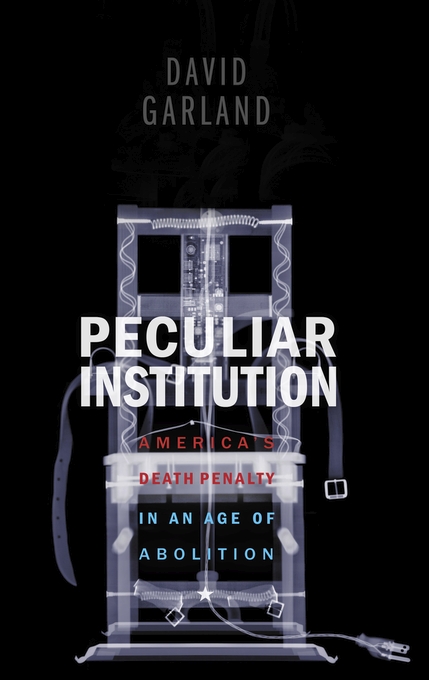 America's Death Penalty in an Age of Abolition

“Some of [Garland’s] eminently readable prose reminds me of Alexis de Tocqueville’s nineteenth-century narrative about his visit to America; it has the objective, thought-provoking quality of an astute observer rather than that of an interested participant in American politics… In his view, an important reason Americans retain capital punishment is their fascination with death. While neither the glamour nor the gore that used to attend public executions remains today, he observes, capital cases still generate extensive commentary about victims’ deaths and potential deaths of defendants. Great works of literature, like best-selling paperbacks, attract readers by discussing killings and revenge. Garland suggests that the popularity of the mystery story is part of the culture that keeps capital punishment alive… While he has studiously avoided stating conclusions about the morality, wisdom, or constitutionality of capital punishment, Garland’s empirical analysis speaks to all three… I commend Peculiar Institution to participants in the political process.”—John Paul Stevens, The New York Review of Books

“How is it that the USA alone among Western societies clings to such barbarity? David Garland’s Peculiar Institution—the evocation of the stain of slavery is quite deliberate—provides a deeply thoughtful and original explanation of this phenomenon. Subtle and provocative, it deserves a wide audience.”—Andrew Scull, The Times Literary Supplement

“[A] magisterial account of the origins, the development, and the transformation of capital punishment.”—Marie Gottschalk, The New Republic online

“[Garland] aims to deepen our understanding of why we still have a death penalty when nations toward whom we feel most kindred do not. In the tradition of de Toqueville, Dickens, Chesterton and Gunnar Myrdal, Garland, who hails from the Scottish Lowlands, casts the discerning eye of the outsider on us. And to compelling result.”—Kevin Doyle, America

“Why does the United States, alone among Western democracies, still have the death penalty? It’s not a new question, but David Garland provides fresh answers from a multilayered analysis… The title hints at the most provocative part of Garland’s answer. In American history, the ‘peculiar institution’ is slavery. Anyone who thinks its vestiges were wiped out by the Emancipation Proclamation or civil rights laws should read this book and think again.”—Kenneth J. Cooper, The Boston Globe

“A magnificently thorough and even-handed book on the death penalty in modern America.”—Bradley Winterton, The Taipei Times

“[Garland] makes a convincing case that lynching is a key thread that shapes the American death penalty. Execution-night rallies, news stories that emphasize victims’ families and a legal system that lets county officials and local juries set the wheels of death in motion all contain echoes of the mob.”—Rachel Proctor May, The Texas Observer

“In Peculiar Institution, David Garland brings a distinctive approach to explaining why the United States stands alone in retaining capital punishment… Instead of asking why America bucked the Western trend towards abolition, Garland sets out to discover what made abolition possible for other countries. By putting the rise and (gradual) fall of capital punishment in a broad historical and comparative perspective, he is able to develop a subtle account of the changing forms and functions of capital punishment over time and of its relationship to the formation of states… Garland’s readable book is a major contribution to our understanding not only of capital punishment in America, but also of the relationship between punishment, state and society. His insistence on the applicability of a general thesis to this peculiar case, and his careful illustration of the interaction between cultural and structural variables are particularly impressive; as is his deft handling of the analogies and disanalogies between capital punishment and lynching (an image which has featured prominently in protests at [Troy] Davis’s execution). Peculiar Institution opens up a large agenda for comparative research both within and beyond the United States, helping us to understand why—however widespread the criticism of Davis’s execution, and however substantial the doubts about his guilt—capital punishment in America is likely to survive.”—Nicola Lacey, The Times Literary Supplement

“This is indispensable reading for students of criminal justice, race, and American culture, for lawyers and judges in the pathways of death, and for all who want to understand why our country can neither put capital punishment to any good use nor put an end to it.”—Anthony G. Amsterdam, University Professor and Professor of Law, New York University

“Peculiar Institution provides the best explanation I have ever read as to why the United States, alone among western democracies, retains the death penalty, and why we have the odd system we do, in which a very small percentage of the people sentenced to death are actually executed.”—Stuart Banner, author of American Property

“Peculiar Institution tells a fascinating and important story that illuminates why the death penalty is so problematic and yet so well suited to American practices.”—Austin Sarat, author of When the State Kills: Capital Punishment and the American Condition