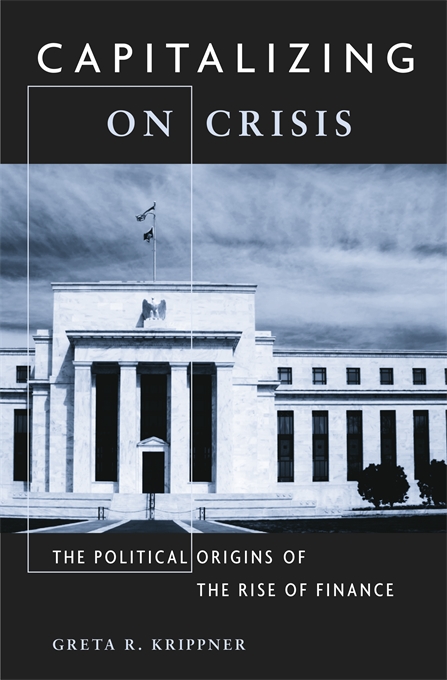 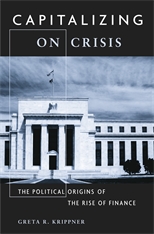 The Political Origins of the Rise of Finance

“One of the most comprehensive books on the topic.”—Rana Foroohar, New York Review of Books

“An exemplary work of scholarship. In the tradition of the best economic sociology, Capitalizing on Crisis shows how the economic and the political are inextricably intertwined.”—Gabriel Abend, American Journal of Sociology

“Amidst the tsunami of books coming out in the wake of the recent financial crisis, Krippner’s work stands out for its unusual approach. Rather than addressing the venality and incompetence of those with responsibility for regulating the economy, Krippner tells the history of the growth of financialization from the perspective of the regulators… In her account, the regulators were searching for ad hoc responses to what were deeper, perhaps even intractable problems. The high point of the book is her magnificent analysis of the erosion of Regulation Q, in which regulators cracked open the door to financial deregulation, unleashing the massive deregulation that came later.”—M. Perelman, Choice

“With Capitalizing on Crisis, we finally have a persuasive account of the roots of the 2007–2008 financial disaster. While most studies focus on the proximate causes, Krippner makes sense of the dramatic expansion over decades of the financial sector of the U.S. economy. She explains brilliantly how and why government officials encouraged financialization as a way to solve the most vexing problems of our political economy.”—Fred Block, University of California, Davis

“In this wonderfully researched and tightly argued book, Greta Krippner shows how the expansion of the financial sector in the United States not only helped delay the ‘day of reckoning’ for spendthrift American households, corporations and government, but also conveniently depoliticized the distributional conflicts that had plagued the nation since the 1960s. Nobody expected these providential outcomes, not even the policymakers who had opened up this space for finance in a rather ad hoc fashion, through repeated efforts to fend off crisis. By the end of the process however, the markets were in charge, and government officials were only too happy—and relieved—to follow their lead. Capitalizing on Crisis is an absolute must-read for anyone who cares to understand the origins of our current financial quagmire and the distributional dilemmas that policymakers inevitably and uncomfortably face.”—Marion Fourcade, University of California, Berkeley