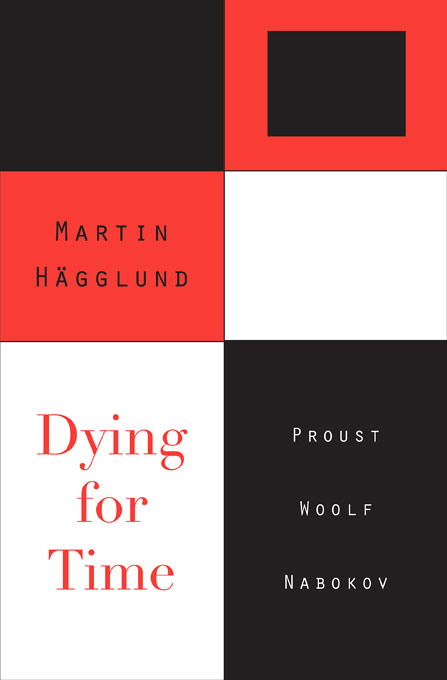 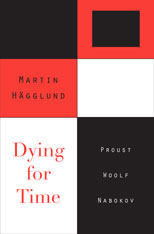 “The Swedish philosopher and literary scholar Martin Hägglund has swiftly established himself at the center of some of today’s most lively intellectual debates… Dying for Time delivers a revolutionary reading of the ways in which modernist writers express elemental aspects of human existence. In the process, it disproves the idea that deconstruction—or, indeed, literary theory per se—is always off-puttingly arid and abstract. Hägglund’s approach is absolutely the opposite… This is a book that brings literature and theory into forceful collision with life’s underlying realities. The resulting insight is resolutely atheistic: neither art nor thought allows access to another world of timeless perfection. Instead, each is irreducibly interwoven with the world in which we live. Some say that literary theory is dead, out of fashion, a thing of the past. But Hägglund shows how it can and should go on living: in unflinching fidelity to how it feels to be human.”—David Winters, The Los Angeles Review of Books

“What distinguishes this important book is that it allows us to understand these canonical modernist concerns [temporality, mourning, and desire] in a wholly new way… It is the true nature of temporal experience that we are returned to by Hägglund’s profound and brilliant book, a work of literary criticism as timely as it is untimely.”—Adam Kelly, Modernism/Modernity

“Dying for Time has the chance to become a minor classic…beyond the crises of the humanities it leads the desire of the writer and the reader back to its origin in a care for something whose value is only underlined by the withering of time.”—Klas Molde, Dagens Nyheter

“Tremendously fruitful… To the extent that literary criticism exists to return the reader to the text, to reveal how much richer and more complex it is than one’s memory of it or thesis about it, Hägglund succeeds admirably.”—Tim Langen, Russian Review

“This book takes a shot across the bow of literature, reexamining the great works of Proust, Woolf, and Nabokov. Martin Hägglund takes on other professors of literature in how they interpreted these great authors. He leaves no stone unturned and no major work untouched… Hägglund makes a convincing argument.”—Kevin Winter, San Francisco Book Review

“Dying for Time provides important readings of the works of Proust, Woolf, and Nabokov. Here again, Hägglund operates with the concept of ‘survival,’ a vantage point that allows him to tackle difficult and central issues in the corpus of these authors. He has original and compelling analyses.”—Jean-Michel Rabaté, Derrida Today

“Dying for Time is a tremendous philosophical achievement that will make it hard to understand desire without turning to the arguments Hägglund makes in his book… From start to finish, Hägglund’s analysis is powerful and incredibly rich.”—Jennifer Yusin, Studies in the Novel

“This book develops a signiﬁcant and original theory of desire, disputing traditional philosophical and psychoanalytic accounts, and it reads novels by Marcel Proust, Virginia Woolf, and Vladimir Nabokov in light of this theory, challenging the critical consensus that attends them… Hägglund convincingly draws out assumptions that otherwise diverse readers hold in common. Still more convincing is the way he draws out evidence from the literary texts in support of his arguments, even if this means challenging those texts’ own self-understanding.”—Audrey Wasser, Modern Philology

“A major intervention into psychoanalytic theory… Hägglund offers a model of trauma that neither prescribes nor restricts the possibilities for ethical remembrance, replacing a static binary of ‘working through’ vs. ‘acting out’ with a provisional reckoning, invested not in trauma’s endless repetition but its surviving, shifting legacy.”—Sarah Senk, MLN

“Dying for Time is a clarion call for the relevance of philosophy, and reading, to life, and to how we live it.”—William Egginton, Open Humanities Press

“Against the dominant criticism surrounding the transcendent aesthetics of these authors, Hägglund powerfully articulates that the complex and nuanced connection between time and desire has been fundamentally misunderstood… Hägglund’s book skillfully and clearly demonstrates that the proof of chronolibido, the investment in mortal life and not the desire to transcend it, derives from the texts themselves.”—Nell Wasserstrom, Modern Language Studies

“Dying for Time has much higher goals than simply challenging the established, traditional reading of Proust, Woolf and Nabokov with respect to questions such as time, mortality, memory or trauma and achieves more than it promises at its inception… Apart from opening an innovative hermeneutical perspective on the works of Proust, Woolf and Nabokov—which could prove itself very fruitful for further and more in depth literary and philosophical analysis of the texts—Hägglund’s book successfully challenges the traditional understanding of time, finitude and temporal being and offers a sound solution to the paradoxical logic of desire. Although Hägglund’s work is to some extent indebted to Derrida’s thinking, the concept of chronolibido can nevertheless be seen as one of the book’s original contributions to the revisal of the traditional understanding of time and our relation to it and to our temporal finitude.”—Paul-Gabriel Sandu, Metapsychology

“A compelling rethinking of the link between time and desire coupled with singularly insightful readings of novels by Marcel Proust (À la recherche du temps perdu), Virginia Woolf (Mrs. Dalloway and To the Lighthouse), and Vladimir Nabokov (Ada or Ardor: A Family Chronicle). Both as theory (of desire) and as practice (of literary analysis), Dying for Time is an unqualified success.”—Robert S. Lehman, Theory and Event

“Revolutionary… Dying for Time: Proust, Woolf, Nabokov ultimately convinces one of the validity of its author’s Derrida-influenced challenge, as Martin Hägglund carefully refutes prominent critics, as well as Freud and Lacan, and consistently proves the validity of his chronolibidinal reading of these texts. Not only do we see how deconstruction is put to a new advantage via Hägglund’s approach, but one is also moved by the elemental struggle to survive depicted in each of these three modernist writers.”—Helane Levine-Keating, Woolf Studies Annual

“This is an excellent rereading of these canonical works, which deal with the subject’s preoccupation with time and loss and explore universal themes of mourning, memory, and subjectivity… Highly recommended.”—D.L. Spanfelner, Choice

“A riveting sequel to Hägglund’s brilliant Radical Atheism, Dying for Time offers a telling critique of traditional approaches to time in modernist fiction and explores a different scheme of values: neither aiming at transcendence nor regretting the impossibility of transcendence, but inextricably linked to our mortality. A critical tour de force.”—Jonathan Culler, Cornell University

“Martin Hägglund’s Dying for Time is a major book that is sure to trigger passionate reactions and productive critical discussions. Its argument about the temporality of literature will appeal to all those who teach and study modernism. It will durably modify the way we conceptualize the main theoretical issues of Proust, Woolf, Nabokov and Freud.”—Jean-Michel Rabaté, University of Pennsylvania

“Martin Hägglund has changed forever how we see the modern novel’s relation to time. Richly argued and lyrical in its celebration of narrative experience, his book shows that what animates the pages of Proust, Woolf, and Nabokov is not the longing for immortality but the keen wish to continue in time.”—Elaine Scarry, Harvard University

“Martin Hägglund argues that the many apparently conflicting interpretations of Proust, Woolf, and Nabokov all impose a metaphysics of timeless being on the texts they interpret, and demonstrates how a radically new, ‘chronolibinal’ reading of these same texts can be performed, one that is no longer determined by the desire to transcend time. As in his earlier, seminal reading of Derrida, Radical Atheism, Hägglund demonstrates an astonishing ability to penetrate to the shared presuppositions that underlie diverse readings, and to clarify the most profound issues involved in impressively lucid prose.”—Henry Staten, University of Washington