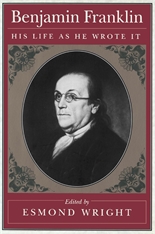 His Life as He Wrote It

Ever the chronicler and teacher, Franklin wrote an autobiography, ostensibly for his illegitimate son William. Apart from hurried additions when he was in his eighties, his story halts at 1757. Tracing his footsteps centuries later, Franklin’s most celebrated biographer completes the last twenty-five years of the autobiography by drawing on Franklin’s most personal and insightful letters and writings—even making additions within the interrupted Autobiography to give us the expository memoir that Franklin intended. Indeed, as he wrote it.