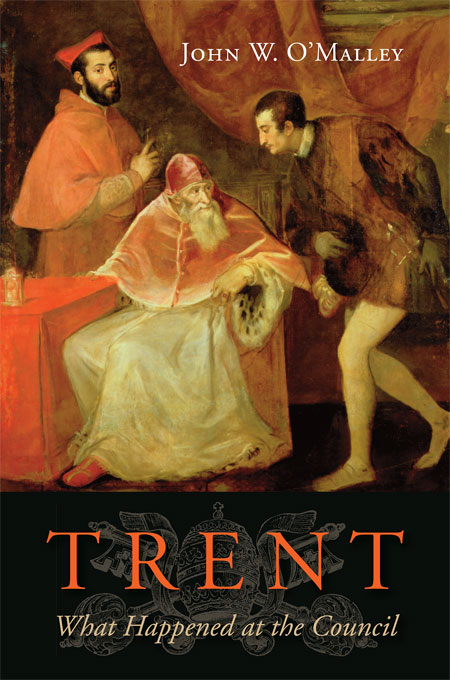 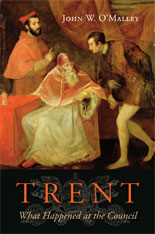 What Happened at the Council

“John O’Malley is the doyen of historians of the Catholic reformation… His new history of Trent sets out to bring the cold light of historical scrutiny to bear on the legends that surround the council itself and its achievements. There is, astonishingly, no modern study of the Council of Trent in English…[so] O’Malley’s lively one-volume survey is to be welcomed on that score alone. But his scrupulously researched and balanced book is also an intervention in fraught and sometimes acrimonious controversies within the modern Roman Catholic Church… His concern is to deconstruct the myth of Trent and ‘Tridentinism’ as a timeless encapsulation of the unchanging continuities of a Catholicism immune to history. Trent, in his view, was no monolith but a straggling historical event, stretched out over two decades and often at the mercy of the European politics that had delayed its convening until all realistic hope of a reconciliation with Protestantism had passed.”—Eamon Duffy, The New York Review of Books

“The decrees of Trent would define the Catholic Church for the next four and a half centuries. Understanding what happened at the Council has never been easy, so John O’Malley is to be congratulated for providing this detailed and elegant account of one of the era’s most important and puzzling events… The astonishing thing is that it has taken so long for a scholar to write an excellent short account of this most crucial of events.”—Jonathan Wright, The Times Literary Supplement

“Trent: What Happened at the Council is written with the clarity and learning one expects of a Jesuit scholar. Its introduction and epilogue are especially cogent expositions of the basic accomplishments of Trent… The bulk of the book, however, comes across as both fascinating and somewhat disillusioning, as we observe the constant tug of earthly powers in the formulation of spiritual doctrine. There are no angelic doctors, as Thomas Aquinas was called, among the council’s deeply savvy leaders. The dark ascendancy of party politics must, I suspect, be counted one further consequence of Original Sin.”—Michael Dirda, The Washington Post

“John O’Malley has done it again. In 2008, he published his splendid What Happened at Vatican II, the best one-volume history of the Second Vatican Council, at least in English. In producing the best one-volume history of the Council of Trent (1545–63), he has rendered equal service to the history of Catholicism… O’Malley’s new history of Trent will be just as influential as his history of Vatican II… Readers of What Happened at Vatican II will enjoy this new conciliar history… In exposing the myths about and elucidating the realities of Trent, O’Malley reconstructs a dramatic event in the history of Catholicism… Anyone interested in the development of the Church’s modern history can now readily engage O’Malley as a guide to what happened not only at Vatican II but also at the Council of Trent.”—Hilmar Pabel, The Tablet

“[O’Malley] has written what is, amazingly, the first one-volume, scholarly narrative history of the council in English… This is a history that is engaged and committed as well as being critical—sometimes searingly so… It is important to remember what actually happened at the council. And that is why this little book, this readable masterpiece of compression, is going to be so indispensable.”—Alec Ryrie, Times Higher Education

“The very considerable achievement of John O’Malley, an immensely learned American Jesuit and academic, is twofold: he strips away these accumulated layers of myth to provide a balanced and convincing account of the Council in its proper historical context; and, more impressively still, he manages to conjure a compelling narrative out of potentially dry-as-dust procedural deliberations and abstruse doctrinal formulations. What emerges most strongly from this account is the sheer unlikeliness of the Council ever having been convened in 1545, and the yet more unlikely circumstance of its successful conclusion 18 years later… O’Malley’s beautifully crafted short account gives readers as much as most of them will need to know about the course and conduct of the Council, while somehow managing to fit in sensitive evaluations of key achievements (the decree on justification and the reform of marriage law) and lively pen portraits of unlikely heroes, such as the can-do papal legate Giovanni Morone, and Charles de Guise, Cardinal of Lorraine, the debonair aristocrat who was also a serious-minded reformer. The abiding impression is of a more rounded, nuanced and less monolithic Catholicism than the brisk syllable ‘Trent’ usually manages to convey.”—Peter Marshall, Literary Review

“[A] superb new history of the Council of Trent… Thanks to John O’Malley, a veteran Jesuit historian of the Counter-Reformation, we now have a beautifully clear and honest reappraisal of the tangled story of Trent, in all its complexity, paradox, achievement and lost opportunity. It is the first time that English-speaking readers have had this privilege, for all other accounts of Trent have been either too short, or too long for non-specialists… The great impression left by this excellent book is that Trent settled much less than people think.”—Diarmaid MacCulloch, London Review of Books

“Every historian of early modern Christianity that I know would agree: in 1993 John O’Malley, S.J., put us all in his debt with the publication of The First Jesuits. This year he moves us deeper into the red with his new book Trent: What Happened at the Council… It is quite simply the most engaging book on the council that I have read.”—Denis R. Janz, America

“O’Malley gives a shrewdly judged amount of the quotidian details of [the bishops’] debates, the background machinations and theological context, yet never overburdens us with arcane details or allows his account to resemble corporate minutes. Nor does he resile from the inevitable conclusion: the timorous participants, overawed by theological pedantry and fear of papal sanctions, squibbed almost every moral or reform challenge that confronted them during the 18 years of the council’s intermittent activities. The cost to Christendom was enormous… [An] engrossing history.”—John Carmody, The Australian

“Provides a concise yet no less scholarly overview of the ups and downs of this frequently name-checked Council… Trent: What Happened at the Council is written with comfortable, accessible authority and really is a vital and intriguing overview of a Council that still casts such an influence some 450 years later.”—David Gibson, The Catholic Times

“O’Malley’s lively narrative shows how so much was accomplished despite the chaos and difficulties: Trent, even when it didn’t enact legislation itself, set Catholicism on the road to reforming its late medieval abuses.”—Brian Bethune, Maclean’s

“This comprehensive account of the 16th-century Council of Trent is the first book of its kind to appear in English, weaving together a detailed narrative of the politics and deliberations of the council with a careful analysis of the decrees that reshaped early modern Catholicism in often subtle and unintended ways… The result is an engaging, accessible treatment of this watershed episode in church history that thoroughly contextualizes both its successes and its failures.”—J. W. McCormack, Choice

“Jesuit historian O’Malley goes beyond the myths to study what actually happened at the Council of Trent (1545–63), at which the Catholic Church codified its teachings. In clear, crisp prose, he clears up misconceptions about the Church at the time (e.g., that Catholics did not read the Bible and priests did not give sermons), shows that many ideas widely considered ‘Tridentine’ actually arose after Trent, and corrects misconceptions: that the council mandated the Mass be in Latin, and that it established a ‘Tridentine’ liturgy. Using the Acts of the council as his source, O’Malley gives an almost day-by-day account, putting the council’s debates in political and religious context of the issues of the day, especially the counter-Reformation and the battle between Pope and princes… Making use of telling details about the very human men who made up the council, O’Malley deftly weaves the story of reformers and traditionalists, to offer an enlightening view of this most influential Church council that will appeal to those interested in church history or in the history of modern Europe.”—Augustine J. Curley, Library Journal

“Despite my diligent efforts, the Council of Trent has always been something of mystery to me. Thanks to John O’Malley, I now know the principal characters and the doctrinal and political issues about which they were so passionately concerned. And O’Malley’s narrative skills make us see the scene, the weather, even the problems of stabling and feeding the hordes of horses necessary to bring the carriages of the participants to a smallish town. A major contribution to the history of the Church.”—Jill Ker Conway, President Emerita, Smith College

“At last, a contemporary history of the Council that made the modern church. And what a history: learned, lucid, and rich in historical insight.”—Anthony Grafton, Princeton University

“In Trent: What Happened at the Council, distinguished author John O’Malley disentangles for us the complicated history of one of the most important ecumenical councils ever held, extracting for us the essential issues from the often animated discussions and the technically formulated decrees on doctrine and reform. Written in a lively literary style without recondite terminology, this compendious account of the Council of Trent will be useful not only to students of church history, theology, and canon law, but also to anyone interested in the religious and cultural developments of the early modern Western world.”—Robert Trisco, Catholic University of America